You are here: Home › communication › Clarence Mackay connected the World

On April 17, 1874, American financier Clarence Hungerford Mackay was born. Mackay was chairman of the board of the Postal Telegraph and Cable Corporation and president of the Mackay Radio and Telegraph Company. He supervised the completion of the first transpacific cable between the United States and the Far East in 1904. He laid a cable between New York and Cuba in 1907 and later established cable communication with southern Europe via the Azores and with northern Europe via Ireland.

Clarence Mackay was the son of the successful silver miner and telegraph mogul, John William Mackay. Starting out with selling newspapers, John continued working at a shipyard and later formed a mining corporation managing to discover the  “Big Bonanza” in Virginia City, the single largest lode of silver ore in the world, to be known as the Comstock Lode in Virginia City, Nevada. More than $100 million dollars worth of gold (over $2.5 billion in today’s currency) was extracted from that mine before it was exhausted in 1898, making all of them unimaginably wealthy. The family then lived between Paris and New York, where they brought up this daughter and their two sons, John and Clarence.

Mackay formed the Commercial Pacific Cable Company in secret partnership with the Great Northern Telegraph Company and the Eastern Telegraph Company and although he died in 1902 before this part of his vision was completed, Clarence Mackay saw the project through to completion between 1904 and 1906. Commercial Pacific operated a cable line from San Francisco to Manila, Philippines, via Hawaii and Guam, with a subsequent spur that went from Manila to Shanghai, China. The company used cable ships to lay its undersea cable across the Pacific Ocean from America’s west coast. The cables extended a length of 6,912 miles (11,124 km) and the project cost about $12 million. Before this, messages had to travel across the Atlantic to the Far East via Cape Town and the Indian Ocean, or via London to Russia, then across the Russian landline to Vladivostok, then by submarine cable to Japan and the Philippines. The cables carried the first message to ever travel around the globe from US President Theodore Roosevelt on July 4, 1903. He wished “a happy Independence Day to the US, its territories and properties…” It took nine minutes for the message to travel worldwide. 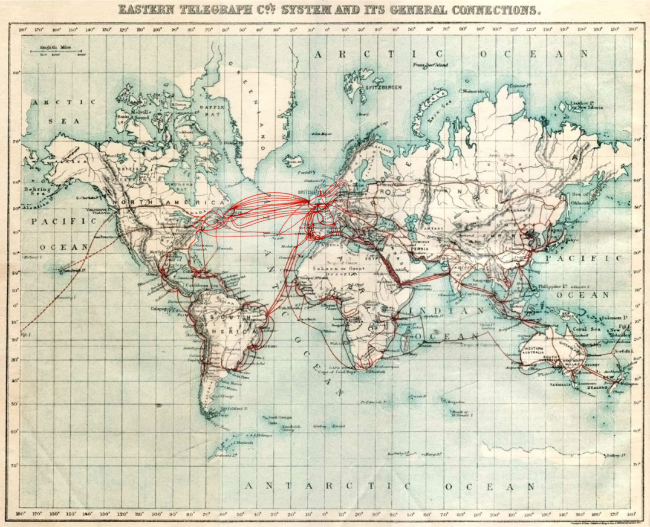 When Clarence Mackay took over the leadership of the company, he further acquired the Federal Telegraph Company, its radio stations and research laboratories. In 1928, Clarence sold his major source of income, the Postal Telegraph Company, to the new International Telephone and Telegraph Company (ITT) for an enormous amount of stock. Unfortunately, Mackay’s profit was wiped out by the 1929 stock market crash.[4] He survived the Great Depression by selling his art and antiques since Mackay was also a noted collector of medieval suits of armor. ITT organized the Postal Telegraph & Cable Corporation as a shell to acquire and control the Mackay System. In 1943, Congress authorized an amendment to the Communications Act of 1934 permitting the merger of the domestic operations of telegraph companies, which allowed for Western Union to acquire Postal Telegraph. The international communications parts of the Mackay system remained with ITT.

Among the three children of Clarence Mackay most notably is Ellin Mackay (1903–1988), who fell in love with the popular composer Irving Berlin, to the fury of her father; Berlin was a Russian immigrant, an Orthodox Jewish widower fifteen years older than she. When Ellin insisted on marrying Berlin in 1926, Clarence disinherited her. However, Berlin was already wealthy at this stage, the most popular songwriter of his time. Clarence Mackay died of cancer on November 12, 1938, at age 64.