You are here: Home › medical science › Paul Broca’s research in the Causes for Aphasia 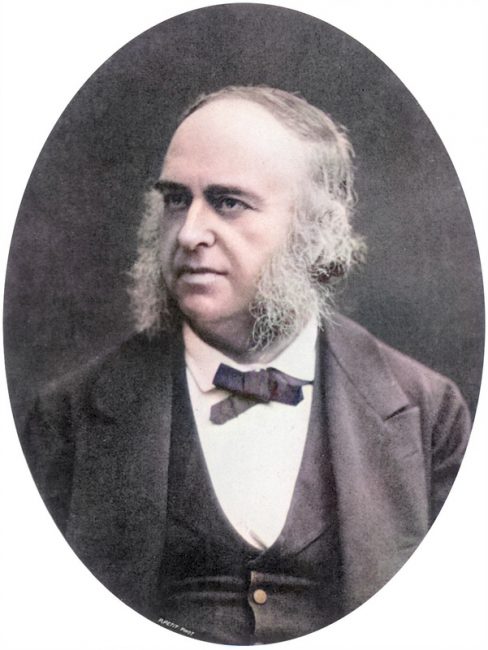 On July 9, 1880, French physician, anatomist and anthropologist Paul Broca passed away. He is best known for his research on Broca’s area, a region of the frontal lobe that has been named after him. Broca’s Area is involved with language. His work revealed that the brains of patients suffering from aphasia contained lesions in a particular part of the cortex, in the left frontal region. This was the first anatomical proof of the localization of brain function.

Pierre Paul Broca was born into a Protestant family. His father Benjamin Broca was a doctor and surgeon in the Imperial Army, his mother Annette Thomas the daughter of a Protestant pastor who was mayor of Bordeaux during the revolutionary period. Highly gifted, he simultaneously became Baccalaureus in literature, mathematics and physics. At seventeen he enrolled in the Faculty of Medicine at the University of Paris and graduated at the age of twenty. Broca became Professor of Surgical Pathology at the University of Paris (then Académie de Paris) and devoted himself to medical research in several fields. By the age of 24 he was already famous, showered with awards and prizes.

In his early research, Paul Broca investigated the histology of cartilage and bone, cancer pathology, the treatment of aneurysms, and infant mortality. He also researched the the comparative anatomy of the brain. As a neuroanatomist he made important contributions to the understanding of the limbic system and rhinencephalon. In his mind, olfaction was a sign of animality and Broca wrote extensively on biological evolution, then known as transformism in France. Paul Broca became active for health care for the poor and became an important figure in the Assistance Publique. Broca was also known to advocated secular education for women and famously opposed Félix-Antoine-Philibert Dupanloup.

Paul Broca is widely celebrated for his  discovery of the speech production center of the brain located in the ventroposterior region of the frontal lobes. He arrived at this discovery by studying the brains of aphasic patients. Broca’s starting point was the dispute between the proponents of cerebral localization. Their views derived from the phrenology of Franz Joseph Gall and their opponents led by Pierre Flourens.[4] Gall’s student Jean-Baptiste Bouillaud kept the localization of function hypothesis, especially with regards to the language center, alive and probably rejected much of the rest of phrenological thinking. Bouillaud challenged professionals of the time to disprove him by finding a case of frontal lobe damage unaccompanied by a disorder of speech. His son-in-law Ernest Aubertin, began seeking out cases to either support or disprove the theory, and he found several in support of it. Aubertin joined Broca’s Society of Anthropology of Paris which became a platform for the localization of function controversy. Even though Aubertin was persistent in presenting new patients to counter their views, it was Broca, who finally put the localization of function existence issue to rest.

His first patient, Leborgne, at the Kremlin-Bicêtre Hospital in Paris, could only pronounce the syllable ‘Tan’, which is why he was nicknamed “Tan”. His speech comprehension, on the other hand, did not seem to be impaired: he was still able to understand the questions he was asked. Monsieur Tan” tried to answer the questions by prosodically articulating different stress patterns, pitches and sequences of this one syllable. The postmortem autopsy revealed that part of the left hemisphere of the brain between the frontal and temporal lobes showed a neurosyphilitic lesion. From a comparative progression of his loss of speech and motor movement, the area of the brain important for speech production was determined to lie within the third convolution of the left frontal lobe, next to the lateral sulcus. For the next two years, Broca went on to find autopsy evidence from 12 more cases in support of the localization of articulated language.

Patients with damage to Broca’s area and/or to neighboring regions of the left inferior frontal lobe are often categorized clinically as having Expressive aphasia. The discovery of Broca’s area revolutionized the understanding of language processing, speech production, and comprehension, as well as what effects damage to this area may cause. Another area of Broca’s research is the comparative anatomy of primates. He discovered for the first time traces of healing on trepanning skulls from the Neolithic. He was interested in the relation between the human skull and the brain with its mental characteristics and its intelligence.

Broca is also a pioneer of physical anthropology. He founded the Société d’Anthropologie de Paris in 1859 and the École d’anthropologie in 1876. He developed new measuring instruments and new numerical indices for craniometry. The use and misuse of his measurements and conclusions by racist ideologies was extensively discussed by Stephen Jay Gould.[7] Broca himself encouraged racist interpretations of his research. Broca’s research was based on the hypothesis that “the relative smallness of a woman’s brain depended simultaneously on her physical and intellectual inferiority“.

Brocca seemed to have had a remarkable character. His contemporaries described him as “generous, sensitive and kind.” In 1848 he founded the Société des libres-penseurs (Free Thinker Society), was a supporter of Darwin’s theory of natural selection and was shown to be a subversive materialist who spoiled youth. In tireless work he has written hundreds of books and articles, 53 of them on the brain. He sought to improve health care for the destitute and supported public health. Among his students are Paul Topinard and Joseph Deniker.

Paul Broca died suddenly, only 56 years old, on July 8 or 9, 1880, probably from a cerebral hemorrhage caused by a rupture of a cerebral artery aneurysm.

“Language Connectivity Pathways and Neuroplasticity in Aphasia”, Will Hula, [8]