You are here: Home › astronomy › The Gran Telescopio Canarias 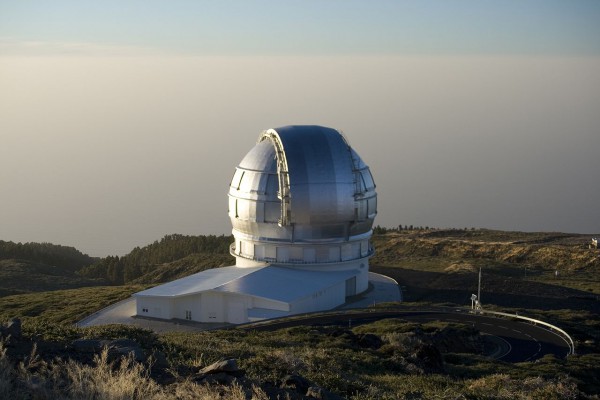 On July 14, 2007, the Gran Telescopio Canarias saw first light, also known as the Great Canary Telescope (GTC), located at the Roque de los Muchachos Observatory on the island of La Palma, in the Canaries, Spain. With an aperture of 10.4m, as of 2015, it is the world’s largest single-aperture optical telescope. It has a segmented mirror, i.e. an array of smaller mirrors designed to act as segments of a single large curved mirror. To function, all the mirror segments have to be polished to a precise shape and actively aligned by a computer controlled active optics system using actuators built into the mirror support cell.

A privileged Observation Point for Astrophysics

Construction of the GTC, sited on a volcanic peak 2,267 metres above sea level, took seven years and cost €130 million. The GTC stands at the edge of the Caldera de Taburiente National Park, a place where geography and climate come together to create exceptional conditions for astronomical observation. Being close to the Earth´s equator provides the telescope views over the whole of the northern celestial hemisphere and part of the southern. It’s location is a privileged observation point for astrophysics, where 80% of nights are exceptionally clear and the atmosphere is stable and transparent. Above the thermal inversion layer (1,200 – 1,600m) the prevailing winds are the trade winds and they are dry and constant, which considerably reduces turbulence.[2]

GTC’s installation had been hampered by weather conditions and the logistical difficulties of transporting equipment to such a remote location. First light was achieved in 2007 and scientific observations began in 2009. The GTC Project is a partnership formed by several institutions from Spain and Mexico, the University of Florida, the Universidad Nacional Autónoma de México, and the Instituto de Astrofísica de Canarias (IAC). Planning for the construction of the telescope, which started in 1987, involved more than 1,000 people from 100 companies.

GTC’s primary mirror is made up of 36 hexagonal segments, each one almost 2m across, 8cm thick and weighs 470 kilograms, fully controlled by an active optics control system, working together as a reflective unit. When the segments are put together they form a perfect hyperbola, which is equivalent to a circular mirror 10.4m in diameter and weighing nearly 17 tonnes.[2] The adaptive optics of the GTC compensates for aberrations caused to light as it travels through the atmosphere by using deformable mirrors to apply real-time corrections (around 200 per second).[2] With an aperture of 10.4m, as of 2015, the GTC is the world’s largest single-aperture optical telescope. Next in line, at 10m, are the two north American Keck telescopes in Hawaii. At 8m there is the four European Very Large Telescopes (VLT) in Chile, the two Anglo-American Gemini in Chile and Hawaii, the Japanese Subaru, also on the Hawaiian island of Mauna Kea, and the two 8.4m mirrors of the Large Binocular Telescope (LBT) in Arizona. 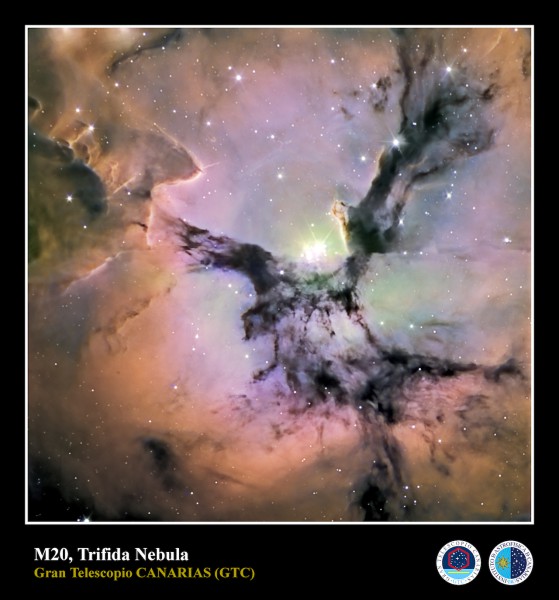 The Trifid Nebula (M20) is an H II region located in Sagittarius. Its name means ‘divided into three lobes’. The object is an unusual combination of an open cluster of stars, an emission nebula (the lower, red portion), a reflection nebula (the upper, blue portion) and a dark nebula (the apparent ‘gaps’ within the emission nebula that cause the trifid appearance).

Besides the lense, the IAC’s OSIRIS (Optical System for Imaging and low Resolution Integrated Spectroscopy) is an essential part of GTC. OSIRIS is an imaging and low resolution spectrograph with longslit and multiobject spectroscopic modes. The second device connected to the lense will be the University of Florida’s CanariCam, a mid-infrared imager with spectroscopic, coronagraphic, and polarimetric capabilities, which will be mounted initially at the Nasmyth focus of the telescope. In the future, when the Cassegrain focus of the telescope is commissioned, it is expected that CanariCam will move to this focus, which will provide superior performance with the instrument.

Towards the European Extremely Large Telescope

The experience gained through building, fine-tuning and operating the GTC is of huge value for the design of future telescopes, in particular the European Extremely Large Telescope (E-ELT) with a planned aperture of 39.3m. The E-ELT will be located in Cerro Armazones at 3060m above sea level in the central part of Chile’s Atacama Desert. It is now already under construction and scheduled to see first light in 2024. The E-ELT will search for extrasolar planets — planets orbiting other stars. This will include not only the discovery of planets down to Earth-like masses through indirect measurements of the wobbling motion of stars perturbed by the planets that orbit them, but also the direct imaging of larger planets and possibly even the characterization of their atmospheres. The telescope will attempt to image Earthlike exoplanets, which may be possible.

Large Telescopes And Why We Need Them – Professor Carolin Crawford, [6]