You are here: Home › medical science › The Skull Collection of Franz Josef Gall 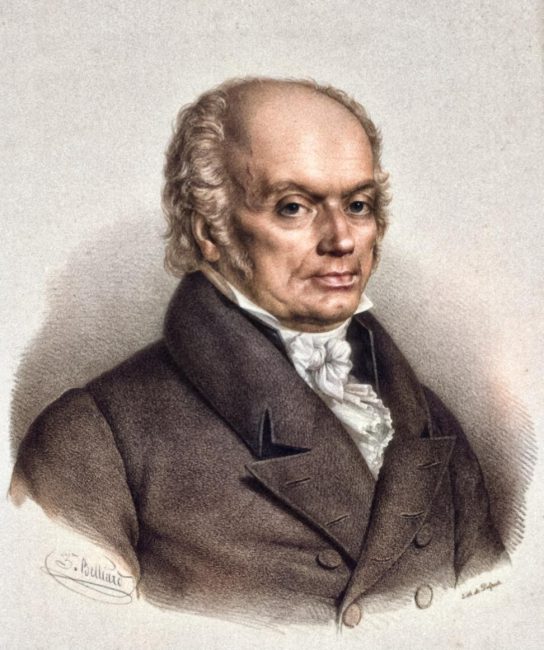 On March 9, 1758, German neuroanatomist and physiologist Franz Josef Gall was born. Gall was a pioneer in the study of the localization of mental functions in the brain and claimed as the founder of phrenology.

“The fate of the physiology of the brain is independent of the truth and falsity of my assertions relative to the laws of the organization of the nervous system, in general, and of the brain in particular, just as the knowledge of the functions of a sense is independent of the knowledge of the structure of its apparatus.”
— Franz Joseph Gall, as quoted in [11]

Franz Joseph Gall was born near Pforzheim and originally intended to devote his life to priesthood. He was first educated by his uncle and later studied medicine in Strasbourg. It was probably in Strasbourg where he was introduced to the works of Johann Hermann, who taught that there was a close relationship between Man and apes and introduced Gall to comparative anatomy. In the 1780s, Gall continued his studies in Vienna, where he was highly influenced by Maximilian Stoll. Franz Joseph Gall reiceived his doctor of medicine in 1785 and became a successful, well-connected, private physician in Vienna.

In the 1790s, Gall was convinced to have discovered localized regions of the cerebral cortex where innate universal faculties resided. He called these regions organs as common in Vienna back in the day. Gall developed the theory of Organology and the method of Cranioscopy that would later be known as Phrenology. Gall’s version of Organology states that the mind is a collection of independent entities housed within the brain. Cranioscopy is a method to determine the personality and development of mental and moral faculties on the basis of the external shape of the skull. During his lifetime, Gall collected and observed over 120 skulls in order to test his hypotheses.

Why Gall’s Theory of Phrenology Failed

Franz Joseph Gall probably believed that the bumps and uneven geography of the human skull were caused by pressure exerted from the brain underneath. In his studies, Gall divided the brain into sections. These corresponded to certain behaviors and traits that he called fundamental faculties. This is referred to as localization of function. The scientist believed that among the 27 fundamental faculties were mechanical ability, talent for poetry, love of property, and also a murder instinct. Gall further made assumptions about that person’s fundamental faculties and therefore their character.

However, he failed with this theory due to three reasons:

Gall’s concepts on brain localization were revolutionary, and caused religious leaders and some scientists to take exception. Many attempted to discredit Gall because they believed he had not given rightful credit to the theories and scientists who influenced him. Étienne-Jean Georget accused Gall of stealing Charles Bonnet‘s basic idea of brain localization that he had written about over 60 years earlier. His ideas were also not acceptable to the court of Josef II. The Austrian government accused Gall of being a materialist and banned his ideas because of their threat to public morality wherefore he left his lecturer position in Austria. However, his phrenological theories and practices were best accepted in England and later the United States. 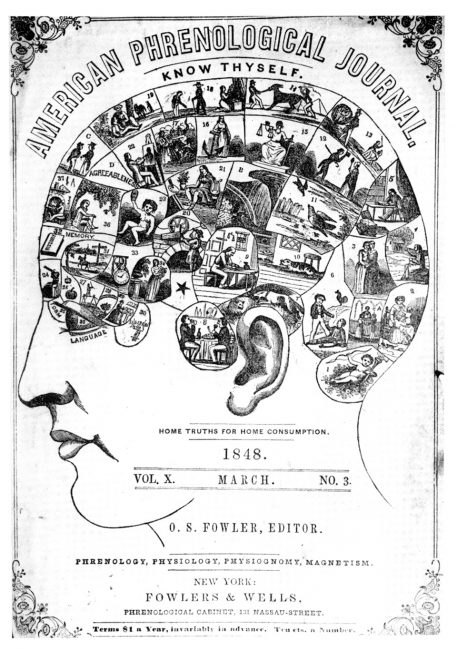 Skull analysis on the title of an American journal (1848)

For his brain anatomical and cranioscopic examinations, Gall collected a large number of skulls in Vienna, mostly from insane people or criminals, as well as many naturally formed plaster busts of well-known persons or from people” with special skull formations. After the initial enthusiasm of the male and female audiences, it gradually turned into public contempt for his new teaching theory, with which he divided the world of science at the time. Nevertheless, the popularity of his theories caused many desires for skulls of important personalities: several graves were plundered – the skulls of Joseph Haydn, Betty Roose and René Descartes,[3] for example, or individual parts such as the skull plate of the composer Gaetano Donizetti. After Gall attracted the attention of the regent Napoleon Bonaparte in France, too, he retired to his country residence in Montrouge near Paris around 1820, where he ordained as a practitioner until the end of his life. His collection of skulls and busts remained in Vienna when Gall left for Paris. In 1824, Gall wrote to his friend Dr. Anton Rollett in Baden near Vienna, leaving him the now famous collection for his museum in which his own skull was “assimilated” after his death.

However, Gall’s theories had an influence both on the Italian criminologist Cesare Lombroso and on his French rival, Alexandre Lacassagne. He also influenced the French anatomist, Paul Broca.[5,6]  The misuse of Gall’s ideas and work to justify discrimination were deliberately furthered by his associates, including Johann Spurzheim. Later, others tried to improve on his theories with systems such as characterology. Franz Gall died on August 22, 1828. in Montrouge near Paris,