You are here: Home › engineering › The Opening of The Golden Gate Bridge 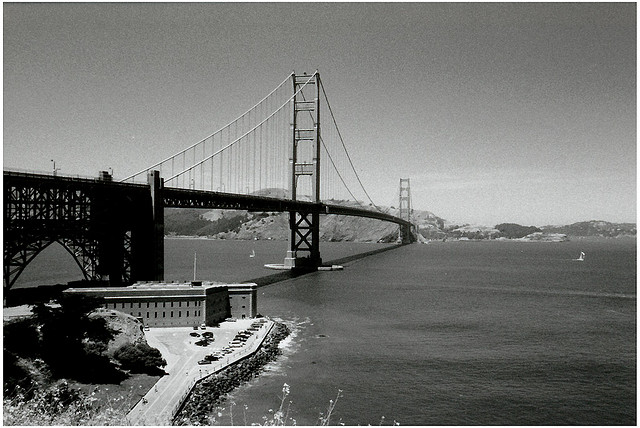 On May 27, 1937, the Golden Gate Bridge of San Francisco spanning over the opening of the San Francisco Bay and connecting the city with Marin County was opened for public traffic. When the planning for the bridge started back in 1916 many experts said that a bridge couldn’t be built across the 6,700 ft (2,042 m) strait. It had strong, swirling tides and currents, with water 372 ft (113 m) deep at the center of the channel, and frequent strong winds. Experts said that ferocious winds and blinding fogs would prevent construction and operation. Construction began on January 5, 1933. The project cost more than $35 million, but finished with $1.3 million under the budget.

Before the famous Golden Gate Bridge was constructed, the only practical way to get from San Francisco to Marin County was by boat. A ferry service opened in 1820. In 1867 the Sausalito Land and Ferry Company service launched and eventually became the Golden Gate Ferry Company. The ferry crossing between the Hyde Street Pier in San Francisco and Sausalito in Marin County took approximately 20 minutes and cost one US dollar per vehicle. Later on the price was reduced to compete with the new bridge.

The proposal for the bridge that eventually took hold was made in 1916 by James Wilkins. The estimated costs for the proposal were too high. Therefore the engineer and poet Joseph Strauss was asked to alter the design. During the early stages of planning the bridge, many parties opposed. The Department of War was concerned that the bridge would interfere with ship traffic. The navy feared that a ship collision or sabotage to the bridge could block the entrance to one of its main harbors. Unions demanded guarantees that local workers would be favored for construction jobs. Southern Pacific Railroad, opposed the bridge as competition to its ferry fleet and filed a lawsuit against the project, leading to a mass boycott of the ferry service. Colonel Herbert Deakyne, on behalf of the Secretary of War, approved the transfer of land needed for the bridge structure and leading roads to the “Bridging the Golden Gate Association”. Another ally was the automobile industry.

The chief engineer Joseph Strauss unfortunately had only little experience with cable-suspension bridges. Therefore Leon Moisseiff, the engineer of the Manhattan Bridge in New York City presented the final design. The architect Irving Morrow designed the overall shape of the bridge towers, the lighting scheme, and Art Deco elements, such as the tower decorations, streetlights, railing, and walkways. Strauss mostly downplayed the crucial contributions of his collaborators who received only little recognition and compensation for their work.

The bridge construction started on January 5, 1933. The construction project was carried out by the McClintic-Marshall Construction Co., a subsidiary of Bethlehem Steel Corporation founded by Howard H. McClintic and Charles D. Marshall, both of Lehigh University. Joseph Strauss remained head of the project during construction. He also innovated the use of movable safety netting beneath the construction site, which saved the lives of many otherwise-unprotected ironworkers. Of eleven men killed from falls during construction, ten were killed on February 17, 1937, when the bridge was near completion when the net failed under the stress of a scaffold that had fallen. Two out of the twelve workers survived the 61 m fall into the icy waters. Nineteen others who were saved by the net over the course of construction became members of their Half Way to Hell Club.

The Mighty Task is Done

On May 27, 1937, the opening celebration began and lasted for one week. On opening day, Mayor Angelo Rossi and other officials rode the ferry to Marin, then crossed the bridge in a motorcade past three ceremonial “barriers”, the last a blockade of beauty queens who required Joseph Strauss to present the bridge to the Highway District before allowing him to pass. An official song, “There’s a Silver Moon on the Golden Gate“, was chosen to commemorate the event. Strauss wrote a poem that is now on the Golden Gate Bridge entitled “The Mighty Task is Done.” The next day, President Roosevelt pushed a button in Washington, D.C. signaling the official start of vehicle traffic over the Bridge at noon.