You are here: Home › engineering › Albert Fink revolutionized the Use of Iron for American Railroad Bridge Construction 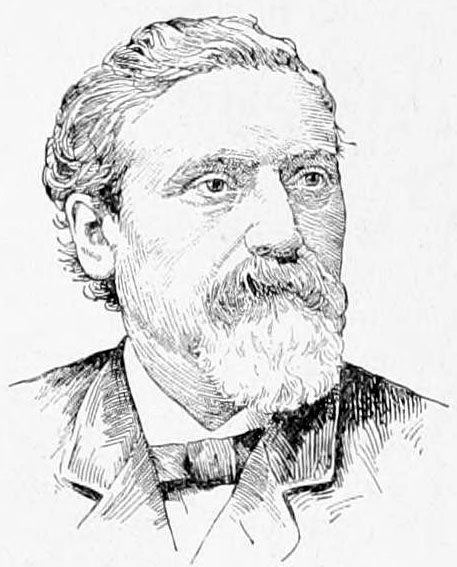 On October 27, 1827, German-American civil engineer Albert Fink was born. Fink is best known for his railroad bridge designs, which helped revolutionize the use of iron for American railroad bridge construction. He devised the Fink truss and many truss bridges, especially the Fink-Type Truss Bridge.

Youth and Emigration to the U.S.

Albert Fink was born in Lauterbach, a town located in the Grand Duchy of Hesse-Darmstadt, Germany, the son of architect and builder Andres S. Fink and Margaret (Jacob) Fink. His father died young, and Albert decided to go to the Polytechnic at Darmstadt to study architecture and civil engineering, where he graduated in 1848. At this time Albert also got caught up in the revolutions of 1848. The uprisings extended from Vienna and Berlin to Darmstadt and even to little Lauterbach.[5] In 1849, Fink emigrated to the United States, and arrived in New York May 2, 1849. By the end of the year, he found work with the Baltimore and Ohio (B & O) Railroad as a draftsman, and became chief office assistant to Benjamin H. Latrobe. In this position he oversaw the design and construction of buildings and bridges. With railroads expanding dramatically, a replacement for wooden bridges was needed that could be built quickly, cheaply, and with a reasonable assurance that it would survive for an extended length of time.[4]

One of his first efforts was completing his design for an iron bridge for the B & O. By the time, the rule of thumb methods that were used in the creation of so many early iron and wooden bridges were hardly to be trusted in the making of an all iron one. So Fink would go to work with pieces of tin and wires, building up trusses in miniature, testing strains and stresses carefully upon these, and from such experiments making his deduction and formulas for the construction of full sized spans. Based upon this work Latrobe gave Fink the project of building a three span bridge across the Monongahela at Fairmount, Virginia in 1852. The bridge, with its three 205 ft spans, was the longest span railroad bridge in the United States when completed and served as the prototype for most long span bridges built on the B & O.

The Fink truss is identified by the presence of multiple diagonal members projecting down from the top of the end posts at a variety of angles. These diagonal members extend to the bottom of each of the vertical members of the truss with the longest diagonal extending to the center vertical member. Many Fink trusses do not include a lower chord. This gives the bridge an unfinished saw-toothed appearance when viewed from the side or below, and makes the design very easy to identify. If the bridge deck is carried along the bottom of the truss (called a through truss) or if a lightweight lower chord is present, identification is made solely by the multiple diagonal members emanating from the end post tops.

With the completion of this portion of road, the section between Grafton and Parkersburg, West Virginia was commenced, and many of the bridges and tunnels of this route were also supervised by Fink. He was also during this time a consulting engineer of the Norfolk and Petersburg railway, which was at the time building the bridge at Norfolk, Virginia. He left the Baltimore and Ohio railroad in 1857 to become the assistant of George McLeod, chief engineer of the Louisville and Nashville Railroad. Under them he built numerous bridges, including the Green River Bridge in Kentucky, then the longest iron bridge in the nation, a bridge in Nashville, Tennessee over the Cumberland, and one over the Ohio at Louisville, Kentucky, which at one mile in length was the longest truss bridge of its time.

During the American Civil War Fink served in the road and machinery department as chief engineer and superintendent. Many bridges were destroyed and roads severed during this period, and Fink led the operating force to repair damages and guard against disasters. Fink meanwhile advanced quickly within the Louisville and Nashville Railroad, first becoming chief engineer. In 1865, he was appointed as general manager, and by 1870, elected vice president. After the Civil War, Fink focused his attention on the economics of transportation and became known as the father of railway economics and statistics through his work in publishing information regarding the real cost of transportation.[4] The 1873 financial crises prompted him to study the cost of transportation, and subsequently published two pamphlets on the topic, officially known as “The Fink Report on Costs of Transportation.”

During this time he also looked for a way to ease the competition between railroad companies and rather have them cooperate. He devised a plan for the Southern Railway and Steamship Association, which would be adopted, and formed in Atlanta. He resigned as vice president and general manager in October 1875 of the Louisville and Nashville Railroad to focus on the organization and management of the Southern Railway and Steamship Association and served as its general commissioner. For two years he worked to stabilize the competitive freight rates amongst the 25 rail companies. He set out to travel to Germany in June 1877. Upon arriving in New York City, he was requested by Vanderbilt, Jewett, Scott, and Garrett, presidents of the four great railroad companies, to stay in the city and organize the westbound railroad traffic on their lines. He accepted the commissionership of these trunk lines, and managed the position with success. In 1878, he was made president of the American Society of Civil Engineers.