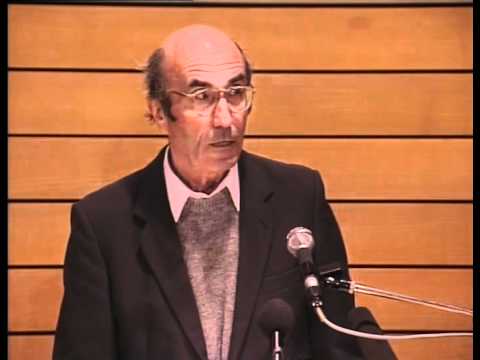 On December 8, 1927, German sociologist, philosopher of social science, and a prominent thinker in systems theory Niklas Luhmann was born. As the most important German-speaking representative of sociological systems theory and sociocybernetics, Luhmann is one of the classics of the social sciences in the 20th century.

“Does knowledge rest on construction in the sense that it only functions because the knowing system is operatively closed, therefore: because it can maintain no operative contact with the outside world; and because it therefore remains dependent, for everything that it constructs, on its own distinction between self-reference and allo-reference?”
– Niklas Luhman (1991)

Luhmann was born into the family of a brewery owner in Lüneburg, Germany. In 1944, at the age of 16, he was officially drafted into the air force. From 1944 to September 1945 Luhmann was in American captivity, his treatment there later appeared to him as “not according to the rules of international conventions, to say the least“. Luhmann became a member of the NSDAP in 1944. His membership is still discussed controversially among historians. On the “Questionnaire for Political Examination” (part of the de-nazification) to be completed for the legal traineeship in 1949, Luhmann dated the NSDAP membership application to 1944, supplemented with the note that he had never received a membership number.

Luhmann studied law in Freiburg from 1946 to 1949. This was followed by an internship in Lüneburg until 1953. From 1954 to 1962 he was an administrative civil servant in Lüneburg, from 1954 to 1955 assistant to the President at the Lüneburg Higher Administrative Court and was seconded to the Ministry of Culture of Lower Saxony in 1955. In 1960/61 Luhmann received a scholarship to Harvard University. There he came into contact with the sociologist Talcott Parsons and his structure-functional systems theory.

After working as a lecturer at the German University of Administrative Sciences Speyer from 1962 to 1965, he worked at the University of Münster in Dortmund. Luhmann received his doctorate in social sciences in 1966. Five months later he habilitated with Dieter Claessens and Heinz Hartmann with the book “Funktionen und Folgen formaler Organisation” (Functions and consequences of formal organisation), which had already been published in 1964. His appointment to the University of Bielefeld in 1968 not only made Luhmann the first professor at this new foundation, but also allowed him to play a decisive role in establishing the first sociological faculty in the German-speaking world. Here he taught and researched until his retirement in 1993.

Luhmann’s life’s work is a general and comprehensive theory of society that claims equal validity in the scientific investigation of social microsystems such as love relationships and macrosystems such as the legal system and politics. The claim of his theory is based on the fact that his system theory is based on communication and that the structures of communication in largely all social systems have comparable forms. Luhmann’s systems theory can be understood as a continuation of radical constructivism in sociology.

Luhmann’s theory of society assumes that modern society is characterized by the process of functional differentiation. Due to the increase in complexity of its own sense resources, the social structure of old Europe has been transformed from a segmental to a stratificatory-hierarchical and further to a functionally differentiated order. In the modern age, subsystems are increasingly detached from the overall context of society and are separated from the rest of society according to their own functional premises. Modern society has been dissolved into a growing multiplicity of subsystems that are structurally linked to each other and to the environment. Society in general represents an identical background for each individual subsystem, which can be functionally designed for the possibility of communication.

Luhmann offers, for the first time in the relatively recent history of sociology, after Emil Durkheim,[4] Max Weber [5] and others, a generally valid and temporally consistent concept of society that is able to dissolve the fundamental paradox that sociology itself is a part of society, i.e. a part of the object that it seeks to understand scientifically. Finally, everything that sociology works with – language, communication, printing, problems, research goals, money, etc. – is provided by society. Sociology must ask (according to Luhmann) how it is possible that subsystems can orient themselves in society and yet have relatively stable structures, and that permanent institutions have established themselves in society that seem to dominate the situation. The subsystems of society are observed in terms of their self-stabilizing, autopoietic structures, and themselves answer what society is by showing how they deal with the complexity and paradox of society.

Luhmann’s systems theory is not without its critics. His definitions of “autopoietic” and “social system” differ from others. At the same time his theory is being applied or used worldwide by sociologists and other scholars. It is often used in analyses dealing with corporate social responsibility, organisational legitimacy, governance structures as well as with sociology of law and of course general sociology.

“Whatever we know about society, or indeed about the world in which we live, we know through the mass media. This is true not only of our knowledge of society but also of our knowledge of nature.”
– Niklas Luhmann, The reality of the Mass Media (2000)