You are here: Home › anthropology › The Social Theories of Lewis Henry Morgan 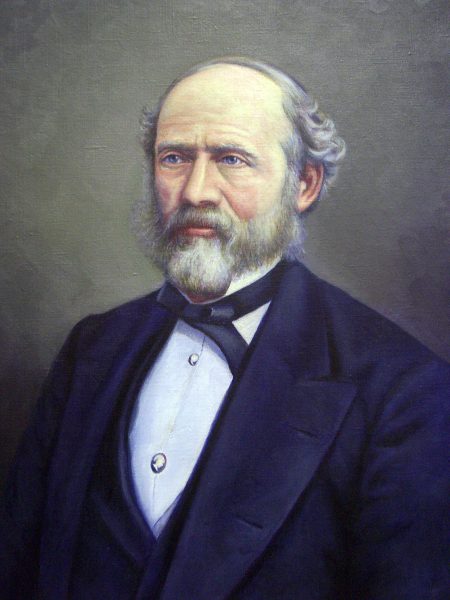 On November 21, 1818, pioneering American anthropologist and social theorist Lewis Henry Morgan was born. Morgan is best known for his work on kinship and social structure, his theories of social evolution, and his ethnography of the Iroquois. Interested in what holds societies together, he proposed the concept that the earliest human domestic institution was the matrilineal clan, not the patriarchal family.

Lewis Henry Morgan was born was born near Aurora, New York, USA, of a Welsh family who had settled in New England as early as 1640. In 1840 Morgan graduated from Union College in Schenectady, New York, and returned to Aurora, where he enrolled in law. He studied the Greek and Roman classics. In 1844 he went to Rochester and established himself as an attorney. In 1851 he married his cousin, Mary Elizabeth Steele, by whom he had three children. In the 1850s Morgan invested in mining and railroad ventures in the Upper Peninsula of Michigan. From these investments he acquired a modest fortune which he bequeathed to the University of Rochester. He served two terms in the New York State legislature, one in the Assembly and one in the Senate. He tried repeatedly, but without success, to obtain a position as United States minister to a foreign country.[4]

During the 1840s, Lewis Henry Morgan befriended Ely Parker of the Seneca tribe and the Tonawanda Reservation. With his help, Morgan was able to study the culture and the structure of Iroquois society. He noticed that they used different terms than Europeans to designate individuals by their relationships within the extended family and he had the creative insight to recognize this was meaningful in terms of their social organization. Morgan was adopted into the Seneca tribe in 1846 and in 1851 he published The League of the Ho-de-no-sau-nee or Iroquois,[8] which presented the complexity of Iroquois society in a path-breaking ethnography that was a model for future anthropologists.

After a few years, Morgan’s interest in ethnology was revived in 1856, when he attended a meeting of the American Association for the Advancement of Science. He returned to further consideration of the Seneca method of designating relatives, which differed radically from Anglo-American usage at many points. In 1858 he discovered that the same system of terminology existed among the Ojibway Indians who lived at Marquette, Michigan.[4] In 1871, Lewis Henry Morgan published his Systems of Consanguinity and Affinity of the Human Family.[9] In it, Morgan argumented for the Morgan set forth his argument for the unity of humankind. At the same time, he presented a sophisticated schema of social evolution based upon the relationship terms, the categories of kinship, used by peoples around the world. Through his analysis of kinship terms, Morgan discerned that the structure of the family and social institutions develop and change according to a specific sequence. He believed that his data definitely proved that the American Indians had migrated to America from Asia.

In later research, Morgan became increasingly interested in the comparative study of kinship relations as a window into understanding larger social dynamics. Morgan saw kinship relations as a basic part of society. In further publications, Morgan was able to introduce a critical link between social progress and technological progress. He emphasized the centrality of family and property relations. He traced the interplay between the evolution of technology, of family relations, of property relations, of the larger social structures and systems of governance, and intellectual development. Lewis Henry Morgan presented three major stages: savagery, barbarism, and civilization, dividing and defining the stages by technological inventions, domestication of animals, agriculture, metalworking (in the barbarian era) and development of the alphabet and writing (in the civilization era). Morgan’s researches and writings led to the publication in 1877 of his best-known and most influential work, Ancient Society.[10] The book attempts to embrace culture in its entirety, but its emphasis is upon the evolution of society.[4]

Morgan advocated the theory of a monotonously ascending development of human culture. Accordingly, all cultures pass through three stages of development: from the stage of “savagery” in primitive communism through the stage of barbarism to the highest stage, civilization. According to Morgan’s theory, all peoples must undergo this development.

Morgan’s final work, Houses and House-life of the American Aborigines (1881),[11] was an elaboration on what he had originally planned as an additional part of Ancient Society. In it, Morgan presented evidence, mostly from North and South America, that the development of house architecture and house culture reflected the development of kinship and property relations. Even though many of Morgan’s theories have later been rejected by anthropologists, he is credited with founding the sub-discipline of kinship studies. Anthropologists further remain interested in the connections which Morgan outlined between material culture and social structure. The theory is based on a comparison between societies at different stages of development. In particular, Morgan distinguishes between a “Societas” based on personal relationships and a “Civitas” based on property and region, thus providing a theoretical-historical model for Ferdinand Tönnies’ distinction between community and society.

During the 1880s, Karl Marx started reading Morgan’s Ancient Society, thus beginning Morgan’s posthumous influence among European thinkers.[12] Frederick Engels is also known to have read Marx’s work. Although Marx never finished his own book based on Morgan’s work, Engels continued his analysis and Morgan’s work on the social structure and material culture is known to have influenced Engels’ sociological theory of dialectical materialism. Having failed to become Commissioner of Indian Affairs, Morgan applied for various ambassadorships under the Grant administration, including to China and Peru. Grant’s administration rejected all the applications, after which Morgan resolved to visit Europe on his own with a professional as well as a personal agenda. He continued with his independent scholarship, never becoming affiliated with any university, although he associated with university presidents and the leading ethnologists looked up to him as a founder of the field.