You are here: Home › art › Emil Nolde – the First Expressionist 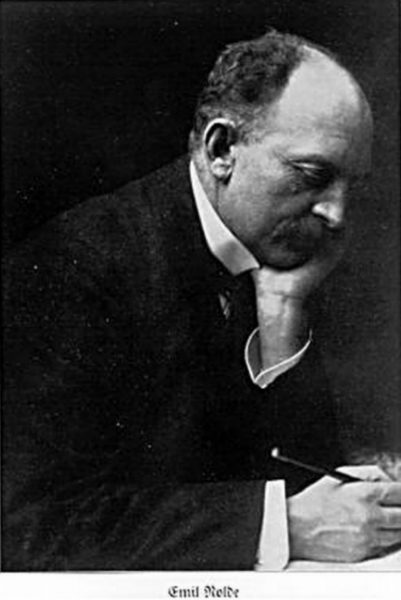 On August 7, 1867, German-Danish painter and printmaker Emil Nolde was born. Nolde was one of the first Expressionists, a member of Die Brücke, and was one of the first oil painting and watercolor painters of the early 20th century to explore color. He is known for his brushwork and expressive choice of colors.

“Pictures are spiritual beings. The soul of the painter lives within them.”
– Emil Nolde, ‘Years of Struggle 1902-14’ Autobiography Berlin 1934

Emil Nolde was born as Emil Hansen near the village of Nolde near Tondern, in the Prussian Duchy of Schleswig (today in Southern Denmark). His parents, devout Protestants, were Frisian and Danish peasants. He soon realized his unsuitability for farm life, and between 1884 and 1891, he as a wood sculptor and draftsman at the Sauermann furniture factory and wood-carving school in Flensburg.[2] He spent his years of travel in Munich, Karlsruhe and Berlin, where he also attended the school of applied arts, and surreptitiously took figure-drawing classes.[2]

From 1892 to 1898 he was a drawing instructor at the school of the Museum of Industrial and Applied Arts (Industrie- und Gewerbemuseum; today the Textilmuseum, or Textile Museum) in St. Gallen, Switzerland. He eventually left this job to finally pursue his dream of becoming an independent artist, but he was already 31 by the time he pursued a career as an artist. When he was rejected by the Munich Academy of Fine Arts under Franz Stuck in 1898, he spent the next three years taking private painting classes at Friedrich Fehr’s painting school, and then changed to the Hölzel school in Dachau,[2] visiting Paris, where he attended the Académie Julian and pursued private studies in the Louvre to become familiar with the contemporary impressionist scene that was popular at this time. He married Danish actress Ada Vilstrup in 1902. Following the wedding he gave up the name Hansen and took the name of his birthplace, Nolde. The couple initially lived in Berlin, where Nolde would meet collector Gustav Schiefler and artist Karl Schmidt-Rottluff, both of whom would advocate his work later in life. 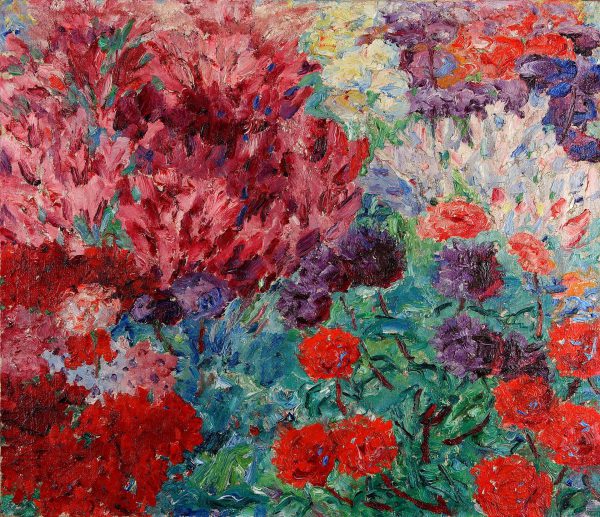 He became a member of the revolutionary expressionist group Die Brücke (The Bridge), of Dresden, in 1906, upon the group’s invitation, who admired his “storm of colour.”[4] This association lasted only until the end of the following year. Large exhibitions took place in Hamburg, Essen, Jena and Hagen. From 1908 to 1910 he was a member of the Berlin Secession, before being excluded in 1910 due to a disagreement with the leadership. In 1912 he exhibited with Kandinsky’s Munich-based group Der Blaue Reiter (The Blue Rider); he had achieved some fame by this time and was able to support himself through his art. He painted Berlin’s night life, did theatre drawings, and produced studies in the Ethnological Museum. In 1911/12 Nolde painted his most important work: the nine-piece “Life of Christ”.[2]

Racked by a Sense of Sin

Fervently religious and racked by a sense of sin, Nolde created such works as Dance Around the Golden Calf (1910) and In the Port of Alexandria from the series depicting The Legend of St. Maria Aegyptica (1912), in which the erotic frenzy of the figures and the demonic, masklike faces are rendered with deliberately crude draftsmanship and dissonant colours.[4] Possibly emulating Paul Gauguin, in 1913 he embarked on an expedition to the Pacific organised by the German Colonial Office and had the chance to visit Russia and many Asian countries. The voyage put him in touch with many distant cultures, to which he was attracted, like most of the Expressionists. In 1927 Nolde had a house built in Seebüll, very close to his birthplace and the border with Denmark.[5]

Nolde was a supporter of the Nazi party from the early 1920s, having become a member of its Danish section. He expressed anti-semitic, negative opinions about Jewish artists, and considered Expressionism to be a distinctively Germanic style. This view was shared by some other members of the Nazi party. However Hitler rejected all forms of modernism as “degenerate art”, and the Nazi regime officially condemned Nolde’s work. Until that time he had been held in great prestige in Germany. A total of 1,052 of his works were removed from museums, more than those of any other artist. Some were included in the Degenerate Art exhibition of 1937 [3], despite his protests. In August of 1941 Nolde was excluded from the “Reich Chamber of Visual Art”, and was prohibited from activity in any area of the fine arts either professionally or even part-time. Nolde lost his right to obtain painting materials, which were becoming ever scarcer. Nevertheless Nolde did not turn away from the Nazis, but continued to hope for recognition of his art by the Nazi regime [2].