You are here: Home › war/crime › Peter Stumpp – the Werewolf of Bedburg 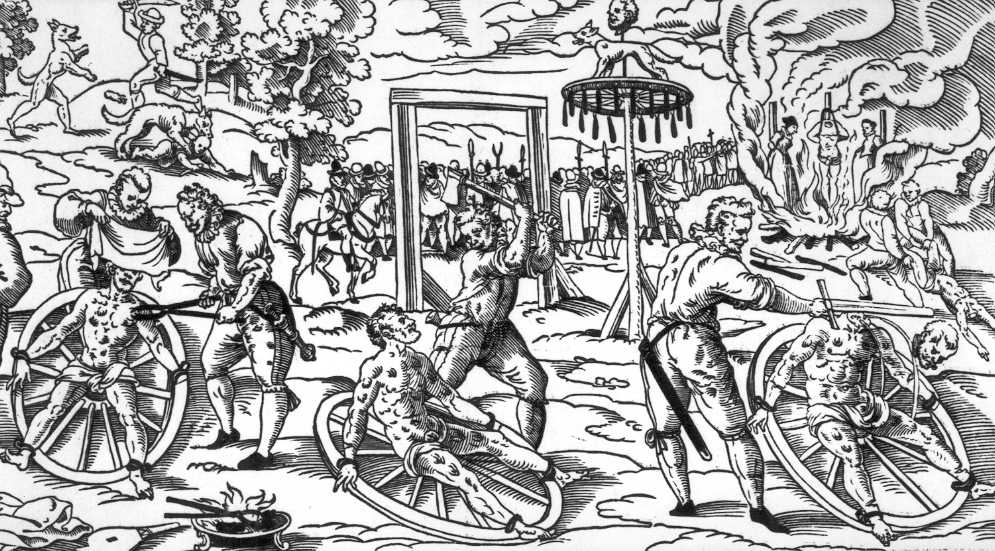 This wood cut shows the ‘breaking wheel’ as it was used in Germany in the Middle Ages.

On October 28, 1589, Rhenish farmer Peter Stumpp was declared guilty of having practiced black magic, being a serial killer, a cannibal, and most of all being a Werewolf. It was one of the most lurid and famous werewolf trials of history.

A Farmer with a Disability

The sources in Peter Stumpp vary, and around 1590 a pamphlet of 16 pages has been published in London as a translation of a German print, however, no copies of the original have survived. The document describes Stumpp’s live and all alleged crimes as well as his trial. Stumpp was born at the village of Epprath near the country-town of Bedburg in the Electorate of Cologne. Unfortunately, his exact birthdate is unknown as the local church registers were destroyed during the Thirty Years’ War. It is believed that the name “Stump” or “Stumpf” may have been given him as a reference to the fact that his left hand had been cut off leaving only a stump, in German “Stumpf” and it was alleged that as the ‘werewolf’ had its left forepaw cut off, then the same injury proved the guilt of the man. Stumpp’s name is also spelled as Peter Stube, Peter Stub, Peter Stubbe, Peter Stübbe or Peter Stumpf, and other aliases include such names as Abal Griswold, Abil Griswold, and Ubel Griswold. It is assumed that Stumpp was a farmer in his rural community and he possibly was a widower with two children. According to the judiciary at the time, Peter Stumpp committed at least 16 murders, rapes and incest over a period of 25 years in Epprath and Bedburg in the Rhineland in the guise of a werewolf. He was also accused of sorcery and living with a “she-devil”.

In 1589 Stumpp faced one of the most famous werewolf trials of history. Apparently, Stumpp was stretched on a rack and heavily tortured before confessing to have practiced black magic since he was twelve years old. Stumpp claimed that the Devil had given him a magical belt or girdle, which enabled him to metamorphose into “the likeness of a greedy, devouring wolf, strong and mighty, with eyes great and large, which in the night sparkled like fire, a mouth great and wide, with most sharp and cruel teeth, a huge body, and mighty paws.” Removing the belt, he said, made him transform back to his human form. For twenty-five years, Stumpp had allegedly been an “insatiable bloodsucker” who gorged on the flesh of goats, lambs, and sheep, as well as men, women, and children. Due to the turture threads, Peter Stumpp confessed to killing and eating fourteen children, two pregnant women, whose fetuses he ripped from their wombs and “ate their hearts panting hot and raw,” which he later described as “dainty morsels.” One of the 14 children Stumpp was accused to have killed was his own son whose brain he was reported to have devoured. Next to the accusations of being a serial killer as well as cannibal, Stumpp was accused of an incestuous relationship with his own daughter, who was then also sentenced to be executed with him. Additionally, Stumpp confessed to having had sexual relations with a succubus which was sent to him by the devil.

The Execution of Peter Stumpp

The execution of Peter Stumpp took place on October 31, 1589 and became known as one of the most brutal recorded executions in history. Apparently, Stumpp was tied to a wheel where “flesh was torn from his body“, in ten places, with red-hot pincers, followed by his arms and legs. Further, his limbs were broken with the blunt side of an axehead to prevent him from returning from the grave, before he was beheaded and burned on a pyre. His daughter and mistress had already been flayed and strangled and were burned along with Stumpp’s body. As a warning against similar behavior, local authorities erected a pole with the torture wheel and the figure of a wolf on it, and at the very top they placed Peter Stumpp’s severed head.

This execution of a werewolf takes place in a historical context where, in various parts of Germany, alleged witches or devil’s minions were hunted down and then condemned after torture sessions that led to extravagant confessions such as those of Peter Stumpp. About 250 werewolf trials from the period between 1423 and 1720 are documented in the literature. This case even attracted attention in the Netherlands, England and Denmark in 1589/1590. Its deeds and execution were depicted in copper engravings. The files on this witch trial have not been preserved. It is therefore impossible to determine whether Stumpp actually committed the crimes for which he was convicted.

Although it is possible that he was actually a murderer, a number of details in the London pamphlet are inconsistent with the historical record. For example, the participation of representatives of the high aristocracy – including the new archbishop and elector of Cologne – seems at first sight surprising. On the other hand, the years in which Stumpp is supposed to have committed most of his crimes (1582-1589) were marked by internal wars in the electorate of Cologne, after the introduction of Protestantism by the former archbishop Gebhard Truchsess von Waldburg. Murder and violence were commonplace. Stumpp was certainly a convert to Protestantism and was supported by Count Adolf of Neuenahr, who was also the lord of Bedburg. After the defeat of the Protestants in 1587, Bedburg Castle fell into the hands of Count Werner of Salmonella-Reifferscheidt-Dyck, a staunch Catholic who was prepared to do anything to re-establish Roman Catholicism, and who used the castle as the headquarters of a troop of Catholic mercenaries. It is therefore not inconceivable that the trial of the alleged werewolf was a thinly disguised political trial, organised with the complicity of the new lord of Bedburg, in order to terrorise the Protestant population of this territory now reoccupied by the Catholics. This hypothesis may explain the unusual presence of high-level personalities at his trial and execution.

Finally, it has been observed that his name is close to the German Stumpf, which means stump. Given the role his severed arm plays in the story, this argues for an essentially apocryphal construction of this extraordinary story.

Deborah Hyde, The Natural History of the European Werewolf  [8]