You are here: Home › art › The Mona Lisa is Missing – Stealing the World’s Most Famous Painting 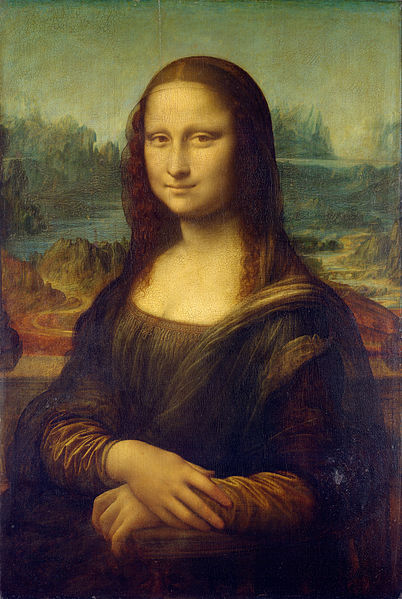 On August 21, 1911 during intensive repair and renovation work the Louvre Museum in Paris realized that Leonardo Da Vinci‘s [2] most famous painting, the Mona Lisa, was stolen.

Who is the Women in the Picture?

The Mona Lisa most likely is the most popular painting in the world. The painting’s title Mona Lisa stems from a description by Italian art critique Giorgio Vasari,[3] who wrote biographies of famous contemporary Renaissance men: “Leonardo undertook to paint, for Francesco del Giocondo, the portrait of Mona Lisa, his wife….“. Published almost 30 years after Leonardo’s death, Vasari’s biography is the first and most authentic provenance information about the painting. Some researchers assume that Leonardo did not paint a real person, but an ideal one, but that the majority of them support other theories. According to the later, the woman portrayed in the painting is referred to as Lisa del Giocondo, and was a member of the Gherardini family of Florence and Tuscany and the wife of wealthy Florentine silk merchant Francesco del Giocondo.

The second main thesis pursued today refers to Giuliano di Lorenzo de’ Medici and his illegitimate son Ippolito de’ Medici with his lover Pacifica Brandani. Giuliano is said to have ordered the painting from Leonardo as a comforting mother substitute for his young son Ippolito, whose mother Brandani had died in childbirth. This is also indicated by a contemporary name “La Gioconda“, which had already been used by a Leonardo pupil: it meant “The Comforting One” – probably because the painting was supposed to comfort little Ippolito de Medici about the loss of his mother.

The historian Magdalena Soest identifies the painting of Mona Lisa as the portrait of Caterina Sforza (1462/63-1509), who was born as the illegitimate daughter of Milanese Duke Galeazzo Maria Sforza and later Regent of Imola and Forlì. Soest’s thesis was first presented by international media in the spring of 2002. According to Magdalena Soest, Caterina Sforza fulfills all (art) historical conditions to be placed on the Mona Lisa model.

Leonardo da Vinci visited Isabella d’Este in Mantua in 1499/1500 and made portrait drawings. A profile drawing is preserved in the Louvre. From the years 1500 to 1504 several letters have been handed down in which d’Este da Vinci – directly and through agents – pursued with inquiries for an (oil) portrait. The preserved drawing shows similarities in the person, but it is a profile drawing; a subsequent rotation without a model session, however, is quite conceivable and would correspond to the “paralyzed half of the face” (hence also “Mona-Lisa syndrome”; med. peripheral facial paresis). The landscape could also be interpreted more as the mountains of Lake Garda (Mantua at Mincio below Lake Garda) than as Florence. The background landscape, the large picture format and the armrest (“Sovereign’s Armchair”) also speak against a bourgeois portrait.

The History of the Painting

Leonardo began painting the Mona Lisa in 1503 or 1504 in Florence, Italy. In 1516 he was invited by King François I to work at the Clos Lucé near the king’s castle in Amboise. It is believed that he took the Mona Lisa with him and continued to work after he moved to France. After his death, the king bought the painting for 4,000 écus and kept it at Palace of Fontainebleau, where it remained until given to Louis XIV, who moved the painting to the Palace of Versailles. After the French Revolution, it was moved to the Louvre, but also spent a brief period in the bedroom of Napoleon in the Tuileries Palace.

The painting’s fame was emphasized when it was stolen on 21 August 1911. The next day, Louis Béroud, a painter, walked into the Louvre and went to the Salon Carré where the Mona Lisa had been on display for five years. However, where the Mona Lisa should have stood, he only found four iron pegs. The Louvre was closed for an entire week to aid in investigation of the theft. But it didn’t help. The Mona Lisa had vanished and the painting was believed to be lost forever, and it was two years before the real thief was discovered. 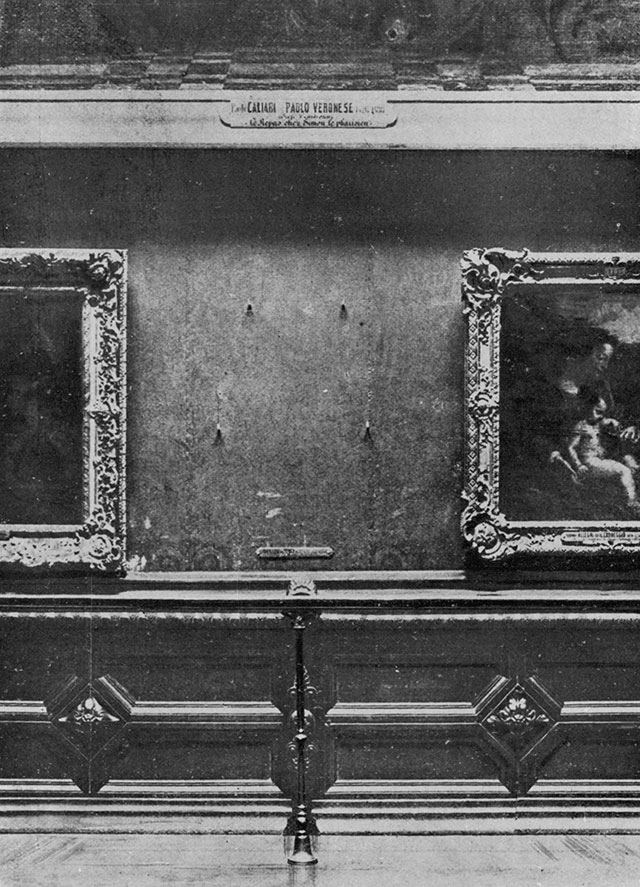 The empty Spot on the Wall after the Theft, Louvre 1911

On August 21, 1911, the painting was stolen by the 29-year-old Italian painter Vincenzo Peruggia, who worked at the Louvre. Hidden in a cupboard, he had had himself locked overnight in the museum, the painting removed from the frame and the following day, probably wrapped in his smock, smuggled out of the museum. Further investigations by the police were futile, the theft remained unexplained for more than two years. For the Louvre it was a huge scandal. The government dismissed the museum director and for three weeks the story dominated the front pages of the newspapers. Many citizens went to the Louvre to see the empty space on the wall, while flying merchants sold postcards and reproductions of the Mona Lisa in front of the Louvre.

Peruggia was an Italian patriot who believed Leonardo’s painting should be returned to Italy for display in an Italian museum. Peruggia may have also been motivated by a friend whose copies of the original would significantly rise in value after the painting’s theft. After having kept the Mona Lisa in his apartment for two years, Peruggia grew impatient and was finally caught when he attempted to sell it to the directors of the Uffizi Gallery in Florence; it was exhibited all over Italy and returned to the Louvre in 1913. Peruggia was hailed for his patriotism in Italy and only served six months in jail for the crime. The public excitement had given the Mona Lisa a high recognition value. If the picture had been known before the theft, it became really famous after its disappearance.