You are here: Home › art › Leonardo Da Vinci – the Prototype of a Renaissance Man

On May 2, 1519, Italian Renaissance polymath Leonardo da Vinci passed away. Leonardo’s areas of interest included invention, painting, sculpting, architecture, science, music, mathematics, engineering, literature, anatomy, geology, astronomy, botany, writing, history, and cartography. He has been variously called the father of paleontology, ichnology, and architecture, and is widely considered one of the greatest painters of all time.

Not much is known about Leonardo Da Vinci’s early life. However, it is believed that he first lived in the hamlet of Anchiano with his father, grandparents, and uncle. Around the age of 14, he was apprenticed to Andrea di Cione, also known as Verrocchio. He was back then one of the most prominent artists and his workshop was then at the centre of the intellectual currents of Florence. There, Leonardo became educated in the field of the humanities. The employment at Verrocchio’s shop highly influenced Leonardo’s‘s career. He improved his technical skills, and took the opportunity to learn more about various fields including chemistry, drafting, metallurgy, plaster casting, leather working, and many more. It is known that much of the paintings from Verrocchio’s workshop were probably completed by his employees. However, it is not completely known which paintings were possibly done by Leonardo. Vasari however, claimed that Leonardo worked together with Verrocchio on his Baptism of Christ. Further, it is assumed that Leonardo functioned as the model for several works by Verrocchio, probably including the bronze statue of David in the Bargello and the Archangel Michael in Tobias and the Angel. Around the age of 20, Leonardo qualified as a master in the Guild of St Luke. However, the artist continued to collaborate with Verrocchio.

The Sforza family ruled Milan and Lombardy from 1450 to 1535. Because of the imminent battles between Milan and the Republic of Venice, Leonardo mentioned in a letter of recommendation to the Duke in detail his abilities and inventions in military technology. It was only at the end of the letter that he emphasized his skills as a civil engineer and architect and finally added a brief reference to his knowledge as a painter and sculptor, which could form the basis for an appropriate execution of the monument for Francesco Sforza. After his employment Leonardo worked for the Sforza for over twenty years with interruptions. In Milan Leonardo became the leading artist and organiser of court ceremonies and festivities.

In 1482, Leonardo da Vinci became active in securing the peace between Lorenzo de’ Medici and Ludovico il Moro, Duke of Milan. After a correspondence with Ludovico, Leonardo created a silver lyre in the shape of a horse’s head and was sent to Milan. There, he continued working and was also commissioned to paint the Virgin of the Rocks for the Confraternity of the Immaculate Conception, and The Last Supper for the monastery of Santa Maria delle Grazie. He also modelled a horse in clay, the Gran Cavallo. It was so large that it surpassed the two large equestrian statues of the Renaissance.

n the same year Leonardo spent several months undisturbed with mathematical and physical research in the libraries and among the scholars of Pavia. There he had been appointed as an advisor on some architectural difficulties in the construction of the cathedral. In Pavia he received new inspiration for his Francesco Sforza by studying an ancient equestrian monument (the so-called Regisole, which was destroyed in 1796). The study of body proportions according to Vitruv as well as studies of proportions of human bodies and faces and anatomical studies date from 1492, because he wanted to get to know “the inside of man” in detail and began to work on his book On the human figure. 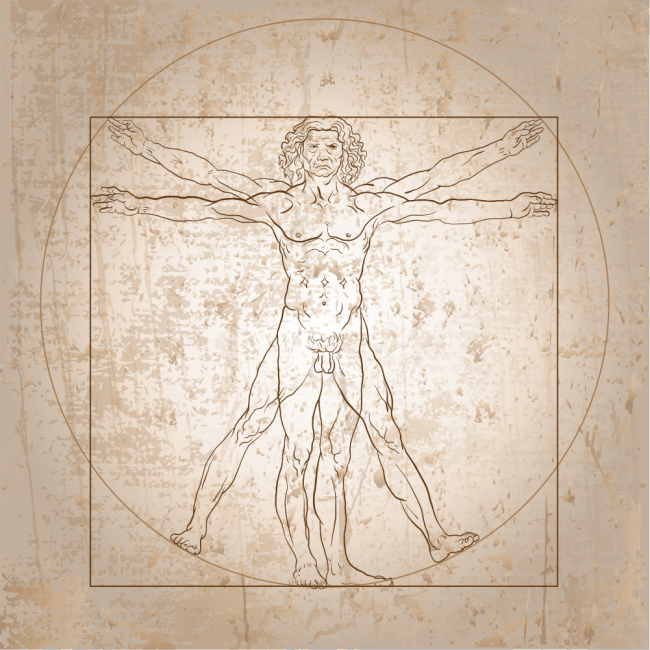 When Leonardo was about 40 years old, almost ten of whom had worked for the Milan court, Ludovico Sforza commissioned him to paint a painting for the front wall of the refectory of the Convent of Santa Maria delle Grazie in Milan. The painting The Last Supper (Italian: Cenacolo or Ultima Cena), a mural measuring 8.8 × 4.6 m, was painted between 1494 and 1498 and is the moment when Jesus tells his disciples that one of them would betray him in a few hours. In order to be able to portray the characters, Leonardo carefully selected his “types” and made many facial studies. The faces of Jesus and Judas remained unfinished, the perfectionist Leonardo did not find a satisfactory solution for a painterly representation. 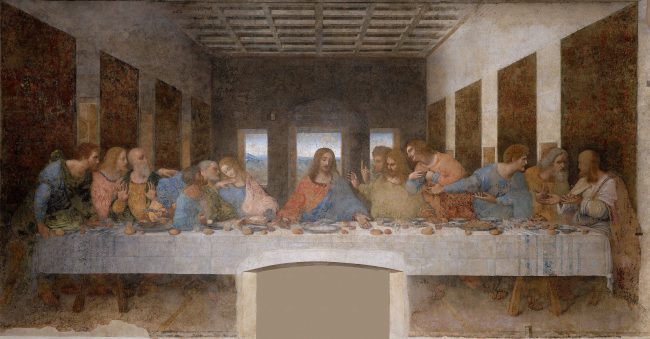 Around 1500, Leonardo returned to Florence. It is believed that his household were guests of the Servite monks at the monastery of Santissima Annunziata. Further, they were probably provided with a workshop and according to Vasari, Leonardo created the cartoon of The Virgin and Child with St. Anne and St. John the Baptist there. Before returning once again to Florence, Leonardo entered the service of Cesare Borgia as a militery architect and engineer. Leonardo probably (re)joined the Guild of St Luke in 1503. He designed and painted a mural of The Battle of Anghiari for the Signoria which took him two years. Michelangelo then was responsible for The Battle of Cascina. Leonardo relocated to Milan in 1508 to live in his own house in Porta Orientale.

During the 1510s, Leonardo spent much time living in the Belvedere in the Vatican in Rome where also Raphael and Michelangelo were active. After François I recaptured Milan, Leonardo commissioned him to create a mechanical lion, that could walk foward. François I became Leonardo’s close friend and it is believed that he was present when Leonardo died on May 2, 1519. He was buried in the Chapel of Saint-Hubert in the castle of Amboise.

At yovisto academic video search you can learn more about The true face of Leonardo Da Vinci in a talk by Siegfried Woldhek.