You are here: Home › explorer › Courage and Folly – The Burke and Wills Expedition Crossing Australia

George Washington Lambert, Burke and Wills on the way to Mount Hopeless, watercolour, 1907

On August 20, 1860, Robert O’Hara Burke and William John Wills led an expedition of 19 men with the intention of crossing Australia from South to North and back again. But, due to poor leadership and bad luck, both of the expedition’s leaders died on the return journey and only one man, John King, crossed the continent with the expedition and returned alive to Melbourne.

In the early 1850’s, gold was found in Victoria, Australia and led to a real gold rush. Europeans followed the boom and quickly came to Australia, causing a quick growth of the cities and infrastructure. A university was founded in Melbourne in 1855 as well as several further scientific institutes, like the Philosophical Institute of Victoria, which later became the Royal Society of Victoria. Two years later, a committee was founded in order to organize an expedition. The search for expedition leaders was difficult and in the end, it is questionable, why Robert Burke was chosen since he had no exploring experience. William Willis was recommended to the committee as a navigator and had a least some experience of living in the wilderness. 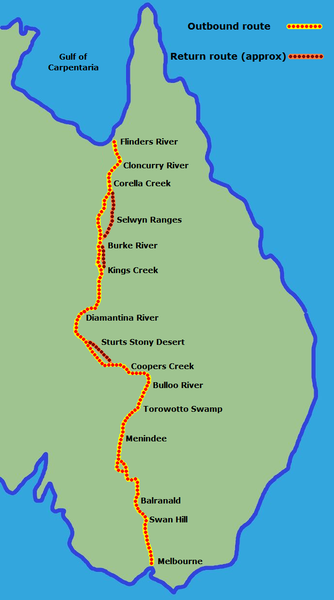 Map of the Expedition
Image: Rocketfrog

The preparations for the journey started almost immediately. While it was known that camels were helpful animals at desert explorations, only 7 were imported to Australia back then, wherefore about another 20 had to be purchased in India. The group left Royal Park on August 20, 1860 and was celebrated by thousands of visitors. Next to the camels, the 19 men brought several horses and wagons with them, since their food had to last at least for two years. A member of the committee suggested a transportation of most items by ship, which Burke refused. By the first weeks, some wagons already broke down, one even before they left Royal Park. The first weeks were difficult due to bad rains and the great amount of time they spent repairing their wagons. 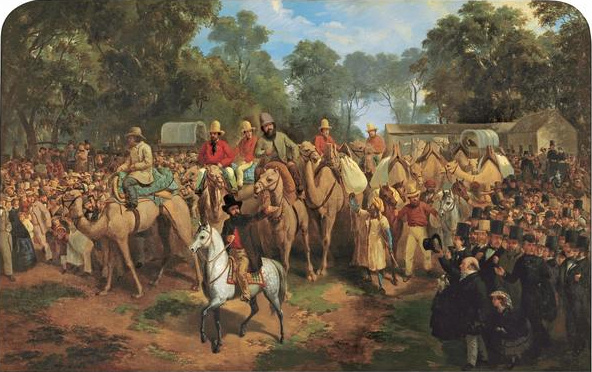 Nicholas Chevalier, Memorandum of the Start of the Exploring Expedition, oil on canvas, 1860, Art Gallery of South Australia

The difficulties continued when the crew noticed their bad progress. In early September, they began leaving heavy items behind and to lessen the burden on horses and men. However, many were disappointed in Burke’s leadership wherefore a few resigned and others were fired from the expedition. In order to keep going, eight further men were hired but the expedition only managed a distance in 2 months that a normal mail coach reached in a week. The slow efforts bothered Burke, since the South Australian government offered a great reward to those, able to cross the continent south-north and Burke feared to arrive only in “second place”. The impatient leader then split the group, which was supposed to meet again at Copper Creek, the farthest place Europeans had explored before.

It was planned that Burke and his crew would wait until March, 1861 so they would not have to travel in the hot Australian summer. But his impatience made him continue already in December, splitting the expedition again. They now headed for the Gulf of Carpentaria while facing daily temperatures of almost 50°C. However, the Aborigines they encountered on the way were friendly and often even helpful. The crew was now short on food and started eating their camels and snakes they caught on the way. They returned to Copper Creek in April, but the camp had been abandoned by the other team earlier. Burke now overruled his by now small team and left for Mount Hopeless in south Australia. Unfortunately, the three men, King, Burke and Wills only managed to travel 8 km per day. Their supplies ran low and they were exhausted wherefore they were not able to leave the creek. Burke and Wills passed away during summer of 1861 and with the help of Aborigines, King was the only one able to continue and survive the expedition. A total of six rescue exhibitions were sent and the bodies of the two leaders were found a few months after they went missing.

A macabre memento from the Burke and Wills expedition, [11]