You are here: Home › archeology › Johann Ludwig Burckhardt and the discovery of Petra 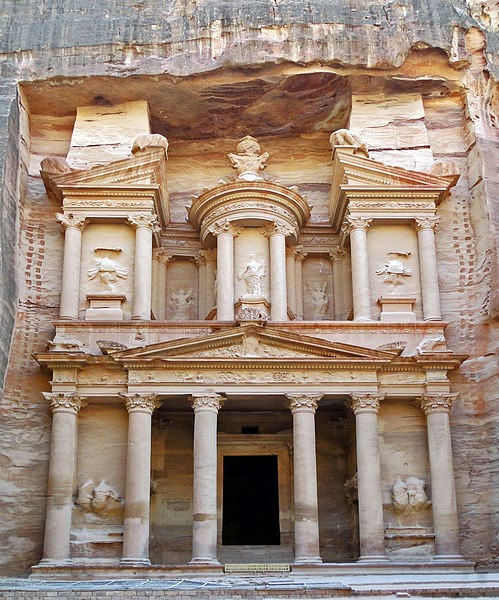 On August 22, 1812, Swiss traveler and orientalist Johann Ludwig Burckhardt, in the disguise of an arab traveler discovered the ruins of the ancient city of Petra, one of the most compelling archaeological sites in existence, in today’s Jordan.

Petra is located east of the Arabah, half way between the Gulf of Aqaba and the Dead Sea at an altitude between 800 and 1350 m in a wide basin in the mountains of Edom. . Its location caused several religious rumors, fact is only that many caravans came to Petra in order to exchange luxury goods and medicine. Its history is highly connected with the Empire of the Nabateans, the first Arabic Empire in history. From 9000 BC, the city is known to be permanently settled and during the 4th century BC, the Nabateans have become so wealthy through trades that they managed to avoid several conquest attempts. Stable housing followed in the century after along with the most flourishing period of the city. Rabell II was the last King of the Nabateans and was defeated by Tajan in 106 AD. Thanks to its strategic location at the crossroads of several caravan routes connecting Egypt with Syria and southern Arabia with the Mediterranean Sea, the city was an important trading centre from the 5th century BC to the 3rd century AD. In particular, Petra controlled an important junction of the incense road. Petra’s influence rapidly decreased and during the 12th century, two castles were built in the city. They were supposed to be defended against Saladin, but it was hopeless.

The advantages of the special topography were added to the traffic-technically favourable location. On the one hand Petra lies hidden and well protected between rugged rock faces. The village is only accessible from the northwest via a narrow mountain path or from the east via a 1.5 kilometre long and 70 metre deep gorge, the Siq (shaft), which is only 2 metres wide at its narrowest point. The close connection of rock and water in the region gave rise to the legend that Petra was the place where Moses, during the exodus of the people of Israel from Egypt, made a spring bubble out of the stone with the blow of his staff. The region around Petra therefore bears the name Wadi Musa (Valley of Moses). The fact is that the Nabataeans, with their skills in water management, created an artificial oasis and thus an essential prerequisite for the city’s prosperity and growth. As the Nabataeans themselves have called their capital city, it is still not possible to clarify without any doubt. According to a not completely certain testimony, the Antiquitates Judaicae of Flavius Josephus, their name was Reqem, Reqmu or Rakmu (English: “the Red”), which could have been an allusion to the reddish colouring of the sandstone of Petra. The Old Testament mentions a place in Edom called Sela in the Book of Judges (1,36) and in the 2nd Book of Kings (14,7). It is controversial, however, whether this place is identical with the Nabataean metropolis, which is testified by Strabo and Pliny the Elder for the time after 169 BC under the Greek name Petra, which also means “rock“.[4]

No European had entered Petra since the time of the Crusades. Around 1800, only a few scholars rumouredly knew of a legendary “city cut out of the rock” in the Middle East. In 1812, the Swiss Oriental traveller Johann Ludwig Burckhardt (also Jean Louis Burckhardt) rediscovered the interest for the legendary city. Burckhardt was born on 24 November 1784 in Lausanne, Switzerland to a wealthy Basel family of silk merchants, the Burckhardt family. After studying at the universities of Leipzig and Göttingen, he travelled to England in the summer of 1806 with goal of obtaining employment in the civil service. Unsuccessful, he took employment with the African Association with the objective of resolving some of the problems of the course of the Niger River. The expedition called for an overland journey from Cairo to Timbuktu. To prepare for the journey, he attended Cambridge University and studied Arabic, science and medicine. At this time he also began to adopt Arabian costume. In 1809 he left England and travelled to Aleppo, Syria to perfect his Arabic and Muslim customs. En route to Syria, he stopped in Malta and learned of Ulrich Jasper Seetzen who had left Cairo in search of the lost city of Petra and had subsequently been murdered. Once in Syria, he adopted the moniker Sheikh Ibrahim Ibn Abdallah to hide his true European identity.

The Rediscovery of Petra

On 18 June 1812 Burckhardt set off from Damascus to Cairo, the starting point of the planned journey to Timbuktu. On this journey he discovered the ruins of the Nabataean city of Petra on 22 August. This discovery was no coincidence, but Burckhardt searched for the city based on stories of locals and source studies.  Burckhardt also describes very vividly at this point the great distrust with which he was constantly confronted and the danger in which he found himself as a result:

“I regret that I cannot give a very complete report of them. Only I knew the character of the people around me. I was without shelter in the middle of a desert where no traveller had ever been seen before; and a careful examination of these works of unbelievers, as they are called, would have aroused the suspicion that I was a sorcerer seeking treasures. At least I would have been stopped, […] but most probably robbed.” [6]

So he undertook the several-day excursion to Petra under the pretext that he had taken a vow to sacrifice a goat at Aaron’s grave. This is located about four kilometres west of Petra. He could not remain long at the ruins or take detailed notes due to his fears of being unmasked as a treasure-seeking infidel. Seeing no evidence of the name of the ruins, he could only speculate that they were in fact the ruins of Petra which he had been informed about on his journey to Syria.

After spending four months in Cairo with no westbound caravans across the Sahara available, Burckhardt decided to journey up the Nile River to Upper Egypt and Nubia. From here he journeyed to the Red Sea and resolved to make the pilgrimage to Mecca as this would enhance his credentials as a Muslim on his journey to Timbuktu. After crossing the Red Sea, he entered Jeddah on 18 July 1814 and became sick with dysentery for the first time in his travels. Here he proved his credentials as a Muslim and was permitted to travel to Mecca. He spent several months in Mecca performing the various rituals associated with the Hajj which was unheard of for a European. Burckhardt spent the remaining two years of his life editing his journals and living modestly in Cairo while waiting and preparing for the caravan that would take him west across the Sahara to Timbuktu and the Niger river. He was again stricken with dysentery and died in Cairo on 15 October 1817, never having made his intended journey to the Niger. 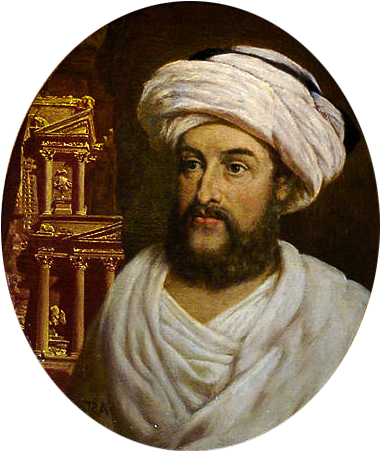 Further scientists then came to the city, describing it in detail and after 1900, scientific research began. Alfred von Domaszewski for instance managed to draw the first map of Petra and it was found that the city’s magnitude was a lot greater than previously assumed. The first serious archeological excavations took place in 1929 and in the 1950’s the British School of Archaeology started excavating the city center. Today, Petra belongs to the most impressive and most visited tourist attractions in the Near East. Hotels were built next to and even directly in the city at first. Starting in the 1960’s Beduins were forced to resettle so the government was able to make a better profit out of the city. More tourists came after Steven Spielberg’s popular adventure movie Indiana Jones and the Last Crusade. To the most famous excavated buildings belongs Al Khazneh, a temple carved out of a sandstone rock face that was originally built as a mausoleum. It holds a lengend in which pirates would hide their good there, wherefore its also called the House of Treasury. The Roman Theater right in the near of Al Khazneh had room for over 10000 visitors and it even contained a back then enormously modern drainage system.

At yovisto academic video search, you may enjoy a Yale video lecture by Professor Diana Kleiner on Baroque Extravaganzas: Rock Tombs, Fountains, and Sanctuaries in Jordan, Lebanon, and Libya.