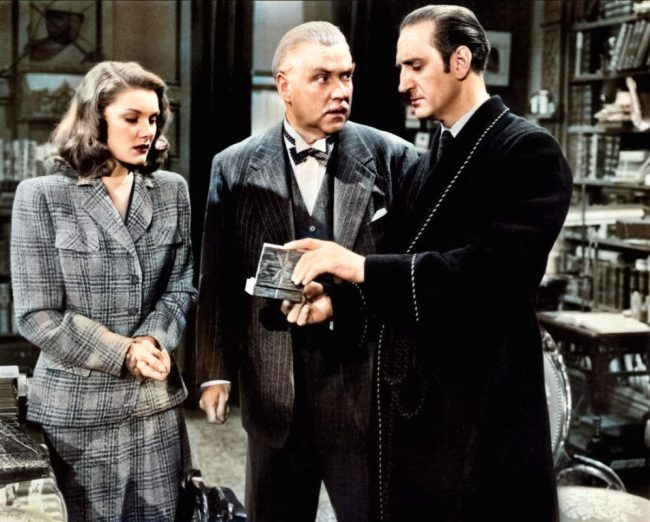 Basi Rathbone as Sherlock Holmes, with Eve Amber, Nigel Bruce in The “Woman in Green” (1945)

On July 7, 1939, one of the most prolific, versatile and successful authors of the late 19th and early 20th century, Sir Arthur Conan Doyle passed away. Besides his best known character, the ‘consulting detective’ of the London police, Sherlock Holmes and his dear friend and advisor Dr. John Watson, he also wrote science fiction stories, plays, romances, poetry, non-fiction and historical novels.

“It is an old maxim of mine that when you have excluded the impossible, whatever remains, however improbable, must be the truth.”
— Arthur Conan Doyle, The Beryl Coronet, The Adventures of Sherlock Holmes (1892), p. 315

Doyle was born on 22 May 1859 in Edinburgh, Scotland. His father Charles Altamont Doyle was of Irish Catholic descent, and his mother, Mary (née Foley), was Irish Catholic.  Supported by wealthy uncles, Doyle was sent to England, at the Jesuit preparatory school Hodder Place, Stonyhurst in Lancashire at the age of nine  He then went on to Stonyhurst College and the Jesuit school Stella Matutina in Feldkirch, Austria. 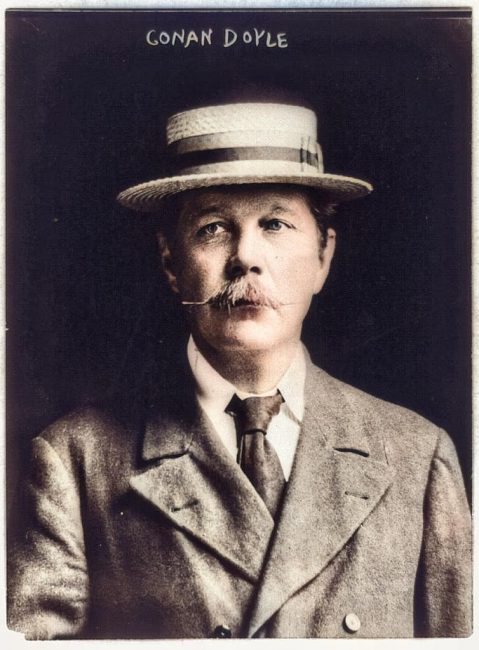 From 1876 to 1881, Doyle studied medicine at the University of Edinburgh Medical School. During that time, he studied practical botany at the Royal Botanic Garden in Edinburgh. While studying, Doyle began writing short stories. His earliest extant fiction, “The Haunted Grange of Goresthorpe“, was unsuccessfully submitted to Blackwood’s Magazine. His first published piece, “The Mystery of Sasassa Valley“, a story set in South Africa, was printed in Chambers’s Edinburgh Journal in 1879. The same year he published his first academic article, “Gelsemium as a Poison” in the British Medical Journal.  Doyle was the doctor on the Greenland whaler Hope of Peterhead in 1880.

A Doctor who is Writing in his Free Time

In 1880 Doyle travelled to the Arctic as a ship’s doctor on the whaler Hope, one year later on the Mayumba to West Africa. From 1882 to 1890 he ran a medical practice in Southsea near Portsmouth, but in his spare time he also wrote his first literary works. In 1883, at the age of 23, he wrote his first novel, The Narrative of John Smith in Portsmouth, but it remained unfinished and unpublished and was not published until 2011. In 1887, at the age of 28, he published the first story of the detective Sherlock Holmes and his friend Dr. Watson: A Study in Scarlet.  Actually, Doyle struggled to find a publisher for the work until he finally ended up with the well known Strand Magazine for the sequel ‘The Sign of the Four‘.

The famous Detective is said to be partially modeled after Doyle’s former university teacher Joseph Bell. Like Holmes, Bell was noted for drawing large conclusions from the smallest observations. Arthur Conan Doyle wrote to Bell,

“It is most certainly to you that I owe Sherlock Holmes… [R]ound the centre of deduction and inference and observation which I have heard you inculcate I have tried to build up a man.”

Robert Louis Stevenson was able, even in faraway Samoa, to recognize the strong similarity between Joseph Bell and Sherlock Holmes [1]:

“[M]y compliments on your very ingenious and very interesting adventures of Sherlock Holmes. … [C]an this be my old friend Joe Bell?”

Overall, Sherlock Holmes was featured by Doyle in four novels and 56 short stories. The character grew tremendously in popularity with the first series of short stories in Strand Magazine, beginning with A Scandal in Bohemia in 1891; further series of short stories and two novels published in serial form appeared between then and 1927. The stories cover a period from around 1880 up to 1914.

Holmes is described as having lodgings at 221B, Baker Street, London, from where he runs his consulting detective service. He lives some kind of bohemian lifestyle and doesn’t care about good manners or the public’s opinion – much to the regret of his dear friend Watson.

“Although in his methods of thought he was the neatest and most methodical of mankind … [he] keeps his cigars in the coal-scuttle, his tobacco in the toe end of a Persian slipper, and his unanswered correspondence transfixed by a jack-knife into the very centre of his wooden mantelpiece … He had a horror of destroying documents…. Thus month after month his papers accumulated, until every corner of the room was stacked with bundles of manuscript which were on no account to be burned, and which could not be put away save by their owner.”

The Premature Death of Sherlock Holmes

In 1893 Conan Doyle decided to end the life of his protagonist Holmes because writing new Holmes stories regularly took up too much of his time and he wanted to concentrate his work on other works. The writer’s mother, an avid reader of the stories, tried in vain to dissuade her son from the project. In The Final Problem, Sherlock falls down the Reichenbach Falls near Meiringen in Switzerland in battle with his adversary Professor Moriarty and is declared dead by Watson.

The methods of criminalistics described by Doyle in his novels, such as dactyloscopy, were ahead of police methods of their time. This applies in particular to the basically scientifically oriented methodology of crime investigation.[2] 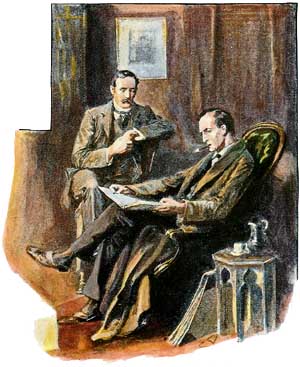 The Empty House, The Return of Sherlock Holmes, illustration by Sidney Paget 1903

The Most Portrayed Movie Character

The Guinness World Records has consistently listed Sherlock Holmes as the “most portrayed movie character” with 75 actors playing the part in over 211 films. And the story continues. In the latest tv adaption Benedict Cumberbatch plays a modern-day version of the detective, with Martin Freeman as Dr Watson, in the very popular BBC One TV series ‘Sherlock’. The series changes the books’ original Victorian setting to the shady and violent present-day London. There, Holmes also uses modern technology, such as texting and blogging, to solve crimes, and in a nod towards changing smoking legislature, he has replaced his pipe with multiple nicotine patches, as London has forbidden smoking in most public areas, yet this interpretation of Holmes still finds nicotine to help the cognitive process.

With historical novels such as Rodney Stone, Sir Nigel and The White Company, Doyle had less success; he himself considered them his best works. Mystic novels such as The Parasite (1894) and Mystery of the Cloomber (1895) also date from this period. In 1899 Doyle went to South Africa to do medical service in the Second Boer War. He was ennobled as a Knight Bachelor in 1902 for his propaganda work in his book The Great Boer War published in 1900.

The Deads are still Alive

Around 1900, Doyle fell ill with typhoid and made a trip to Norfolk. There he met Fletcher Robinson, who came from Devonshire and grew up in Dartmoor. Fletcher told Doyle old legends about his homeland, including some horror stories about a ghost dog. These inspired Doyle to write a novel in which a ghost dog threatens a family. Doyle traveled to Dartmoor to capture the real atmosphere. There he realized that he needed a hero in the form of a detective to investigate the mysterious events. He decided to go back to his character Sherlock Holmes, although he had declared the series completed in 1893. The great success of The Hound of the Baskervilles (1901/1902), prompted Doyle to literarily revise Sherlock Holmes’ death in 1905’s short story The Empty House, which followed the novel.

Professor Challenger and the Lost World

In the following time Conan Doyle created his second very popular character, Professor Challenger. The Forgotten World, where she first appeared, was published in 1912 and is considered his best-known novel alongside the Sherlock Holmes series. Doyle’s texts published during the First World War sometimes take a critical look at Germany at that time. In October 1918, a few months before the official end of the war, his son Kingsley died of the Spanish flu. Doyle began to devote herself increasingly to science fiction in the tradition of Jules Verne as well as spiritualism and mysticism and also undertook lecture tours.[3]

Among other things, he made known the so-called Cottingley Fairies, fake photos of fairies whose authenticity he firmly believed in. His public controversy with the magician Harry Houdini made headlines. The friendship between Doyle and Houdini was shattered by differing ideas about spiritualism – Doyle accepted various media as real and believed that Houdini himself had supernatural abilities, while Houdini, according to his own statement, never experienced a seance whose effects he could not have copied with magic tricks.