You are here: Home › history › Oswald Spengler and the Decline of the West 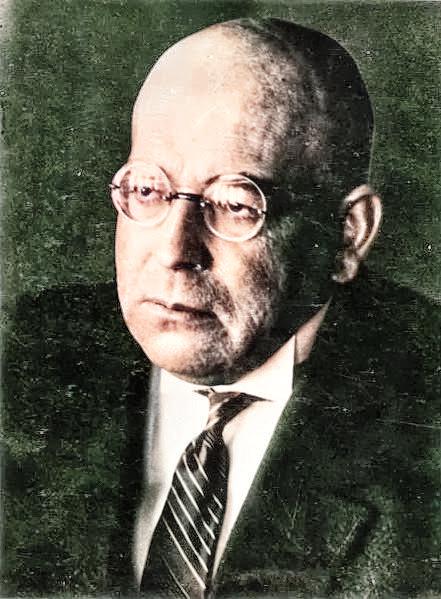 On May 29, 1880, German historian and philosopher Oswald Arnold Gottfried Spengler was born. He is best known for his book The Decline of the West (Der Untergang des Abendlandes), published in 1918 and 1922, covering all of world history. He proposed a new theory, according to which the lifespan of civilizations is limited and ultimately they decay.

“What the myth of Götterdämmerung signified of old, the irreligious form of it, the theory of Entropy, signifies to-day—world’s end as completion of an inwardly necessary evolution.”
Oswald Spengler, The Decline of the West, Vol. I, Alfred A. Knopf, 1926, pp. 423–24

Already in his early life Oswald Spengler was highly interested in historical events and he used his vivid fantasy to design fictional states into smallest details. After high school he decided to enroll at the universities of Halle, Munich, and Berlin studying philosophy, mathematics, and nature science. During his years in school and university, Oswald Spengler’s most significant influences were Ernst Haeckel, Hans Vaihinger, and Friedrich Nietzsche. Spengler originally planned on becoming a teacher, but after inheriting a large amount of money from his mother, he began his career as a writer.

The Decline of the West

First, Oswald Spengler authored several articles in magazine’s and newspaper’s culture sections and started working on ‘The Decline of the West‘ in 1911. His masterpiece was published in 1918 as well as 1922 and Spengler face a wide ranged criticism. In certain social areas, he was praised as a political, literary, and cultural genius, and in others he was deeply despised.

“At this level all civilizations enter upon a stage, which lasts for centuries, of appalling depopulation. The whole pyramid of cultural man vanishes. It crumbles from the summit, first the world-cities, then the provincial forms, and finally the land itself, whose best blood has incontinently poured into the towns, merely to bolster them up awhile. At the last, only the primitive blood remains, alive, but robbed of its strongest and most promising elements.”
– Oswald Spengler, The Decline of the West, Vol. II, Alfred A. Knopf, 1928, pp. 104–06

In his work, Spengler emphasizes how the Western world is about to end while its civilization witnesses the last season he titles as winter time. In his views, a western civilized person has a tragic role in history as he will never be able to reach his final goals. Oswald Spengler describes in his book that nearly all cultures somewhat undergo a similar patterns and the western world was about to reach its end. These theories were highly controversial and further explanations emphasized the author’s anti-democratical and anti-liberal view. He developed new thoughts on races, but his further explanations reject Hitler’s philosophy.

“To-day we live so cowed under the bombardment of this intellectual artillery that hardly anyone can attain to the inward detachment that is required for a clear view of the monstrous drama. The will-to-power operating under a pure democratic disguise has finished off its masterpiece so well that the object’s sense of freedom is actually flattered by the most thorough-going enslavement that has ever existed.”
– Oswald Spengler, The Decline of the West, Vol. II, Alfred A. Knopf, 1928, p. 461

The book was widely discussed, even by those who had not read it. Historians took umbrage at his unapologetically non-scientific approach. Thomas Mann compared reading Spengler’s book to reading Schopenhauer for the first time. Academics gave it a mixed reception. Max Weber described Spengler as a “very ingenious and learned dilettante“, while Karl Popper called the thesis “pointless”.[7]

After his major work, Oswald Spengler distributed his philosophies and theories on the future of western civilizations in smaller works. In late 1919, Spengler published Prussianism and Socialism (Preußentum und Sozialismus), an essay based on notes intended for the second volume of The Decline of the West. According to Spengler, mankind will spend the next and last several hundred years of its existence in a state of Caesarian socialism, when all humans will be synergized into a harmonious and happy totality by a dictator, like an orchestra is synergized into a harmonious totality by its conductor. In 1931, he published Man and Technics, which warned against the dangers of technology and industrialism to culture. He especially pointed to the tendency of Western technology to spread to hostile “Colored races” which would then use the weapons against the West. It was poorly received because of its anti-industrialism

He often mentioned his anti-democratic views and wished for a dictator, able to master the country’s inner and foreign policies, but at the same time he openly refused to accept Hitler as a leader and was known to be an emphatic opponent of the National Socialism. Spengler spent his final years in Munich, listening to Beethoven, reading Molière and Shakespeare, buying several thousand books, and collecting ancient Turkish, Persian and Indian weapons. He died of a heart attack on 8 May 1936, in Munich, at age 55.