You are here: Home › philosophy › Amusing Ourselves to Death by Neil Postman 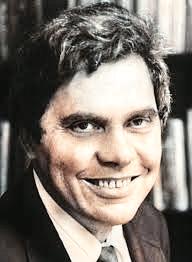 On March 8, 1931, media theorist, author, and cultural critic Neil Postman was born. He is best known for his works criticizing the increase of the role of technology in every human’s life not seeing the dangerous side effects. By the time I was an undergraduate student of computer science, his famous book Amusing Ourselves to Death was brand new and subject of our course “Computer and Society”.

“Writing freezes speech and in so doing gives birth to the grammarian, the logician, the rhetorician, the historian, the scientist — all those who must hold language before them so that they can see what it means, where it errs, and where it is leading.”
— Neil Postman, Ch1: Amusing Ourselves to Death, p. 12 (1985)

Neil Postman was born in New York City and spent there almost all of his lifetime.  He graduated at the State University of New York in 1953, followed by receiving a master’s degree from Columbia University in 1955, and an Ed.D (doctor of education) degree in 1958. A few years later, he began teaching at the New York University (NYU) and founded a graduate program in media ecology. In his further career, Postman became professor and chairman of the Department of Culture and Communication. In 1976, he designed a television series for CBS in which he imparted knowledge to students.

Amusing Ourselves to Death

Neil Postman earned himself an astonishing reputation through the years criticizing new technologies as they could “never substitute for human values“, which he distributed in 18 books and hundreds of newspaper and magazine articles. Amusing Ourselves to Death from 1985 presumably depicts Postman‘s best known work, in which he warns society about the increase of mass communication in order to lose the ability to share and discuss rather serious topics, such as politics, journalism or education adequately. According to Postman, television turns serious and complex issues into superficial topics, aiming to entertain instead of inform society. He argued that television endangers the judgement of citizens and that the compulsion to illustrate leads to an emptying of the contents of politics and culture. He coined the term “infotainment”. In this context, Postman lamented the infantilization of society. Not that this has changed much since the 1980s. However, his work was translated into eight languages and was sold over 200.000 times. In 1986, Postman received the Orwell Award for “outstanding contributions to the critical analysis of public discourse.”

In 1990, Postman gave a speech at the German Society for Computer Science stating that the way our society depends on information is critical and has become more of a burden instead of a benefit. The media ecology described by him postulates that when a new medium emerges, social change is based on systemic interactions that have far more than an additive effect (old world plus new medium). He understood media as a form in which information is conveyed; as a kind of substitute language that translates content in a very specific way. With regard to the use of technical equipment, a medium is, on the one hand, the way in which the equipment is used and, on the other, the social and intellectual environment produced by the use of the equipment. The effect of the television pictures played an important role in his argumentation. He assumed that they exclusively provoked aesthetic reactions and that television suppressed the emergence of ideas in order to meet the value standards of show business. Thus soft logical thinking in favor of emotionality and superficiality. Sounds familiar?

“The world in which we live is very nearly incomprehensible to most of us. There is almost no fact …that will surprise us for very long, since we have no comprehensive and consistent picture of the world which would make the fact appear as an unacceptable contradiction.”
– Neil Postman, Amusing Ourselves to Death (1985)

Postman criticized television as a medium of total revelation in which private and intimate areas of life were also revealed. As a danger of this aspect he calls the breakdown of moral rules of conduct, but especially the dismantling of shame. Since this medium depicts events as if they were happening at the moment of the broadcast, it generates an endeavour, characterized by Postman as “uncivilized”, to directly satisfy needs and to be indifferent to the world of the child – still mysteriously shrouded in more civilized times.

Another well known and highly discussed work by Postman depicts his 1992 published book Technopoly. In this work, the technopoly is a culture like the United States, longing for efficiency, preferring technical calculations over human judgement. In order to Postman, this is a problem since more technology produces more information. He later stated that all affected humans, preferably students should have access to learn all effects of the increasing role of technology in their future. Through “littering” with information in the information age, the disorientation of people is intensified to such an extent that society has fallen ill with “cultural HIV”. It should be noted that HIV patients generally died quickly in 1992.

The Disappearance of Childhood

In his argumentation, Postman often refers to specific situations in the middle ages, just as he did in The Disappearance of Childhood. He argues that since the middle ages, society developed a whole different role of the childhood in a human’s life. Childhood is a phenomenon that only occurs at the end of the Middle Ages, when the world of adults and the world of the child were still close together. Adults and children did not differ significantly from one another. With the invention of printing, this relationship between generations changes. Adults now have exclusive access to a world of knowledge that remains hidden from the child until it has mastered the technique of reading. This creates a space – childhood – without access to the secrets of adult life. However, television dissolves this boundary by making the knowledge of adults accessible again to all. In the entertainment shows, no topic is left out, incest, homosexuality and other topics are prepared for everyone – including children – and made available for consumption or entertainment purposes.

Further works by Neil Postman are almost as widely known as they are discussed and his reputation survived until this day, wherefore he belongs to one of the most significant media and cultural critics of all times. Neil Postman died of lung cancer on October 5, 2003 at age 72.