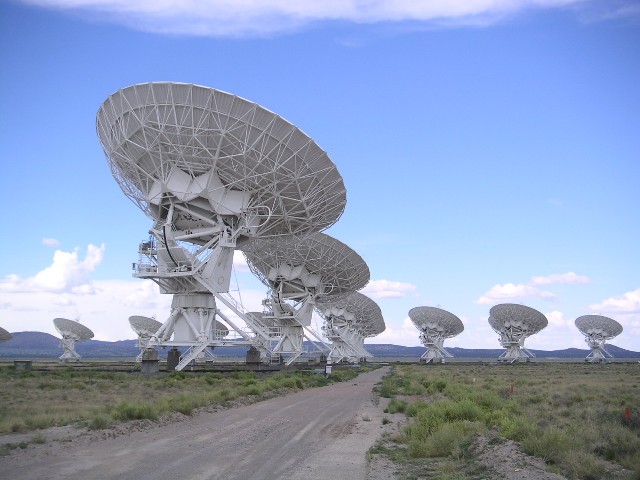 On September 27, 1918, English radio astronomer and Nobel Laureate Sir Martin Ryle was born. Ryle developed revolutionary radio telescope systems and used them for accurate location and imaging of weak radio sources. He was Astronomer Royal from 1972 to 1982 and shared the Nobel Prize in Physics in 1974 with Antony Hewish, the first Nobel prize awarded in recognition of astronomical research.

“I think that the event which, more than anything else, led me to the search for ways of making more powerful radio telescopes, was the recognition, in 1952, that the intense source in the constellation of Cygnus was a distant galaxy—1000 million light years away. This discovery showed that some galaxies were capable of producing radio emission about a million times more intense than that from our own Galaxy or the Andromeda nebula, and the mechanisms responsible were quite unknown. … [T]he possibilities were so exciting even in 1952 that my colleagues and I set about the task of designing instruments capable of extending the observations to weaker and weaker sources, and of exploring their internal structure.”
— Sir Martin Ryle, From his Nobel Lecture (12 Dec 1974)

Martin Ryle was born in in Brighton/Sussex, UK, the son of John Alfred Ryle, a highly respected professor of medicine, social medical doctor and extraordinary doctor to the King of England, and Miriam Ryle as well as the nephew of Oxford University Professor of Philosophy Gilbert Ryle. In the first years of his life, a governess was responsible for his upbringing and care. First he studied at Galdstone’s preparatory school in Eaton Square in London. Then, in 1931, he attended Breadfield College in the old family tradition. During his school years, he received regular home instruction in craftsmanship from a master carpenter. From 1936 he attended Christ Church in Oxford and during this time he was able to show exemplary learning achievements. His interest in radio technology and electronics was very obvious. After completing his physics studies at the University of Oxford in 1939, he worked on the development of radar during the Second World War. 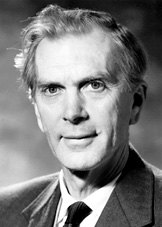 During his earlier years in Cambridge, he was head of the radio astronomy group, where catalogs of cosmic radio sources were produced. The most important achievement of this activity was the creation of the Third Cambridge Catalogue (3C), which was an important tool in the discovery of the first quasars (quasars) 3C 273. In the early 1960s, Ryles’ work at the Mullard Observatory supported the theory of the Big Bang. His counting of weak radio sources in the universe with Peter Scheuer spoke against a homogeneous distribution. This led to fierce controversies and hostility from his group, since in Great Britain the representatives of the steady-state theory (such as Fred Hoyle,[5] Hermann Bondi)[6] were very influential at the time. The observation methods of the group were also questioned.

In order to observe distant cosmic radio sources such as quasars, Ryle developed aperture synthesis, first realized in the One Mile Telescope of the Mullard Observatory (completed in 1964). An important contributor to this, as in the big bang controversy of the mid 1950s, was Peter Scheuer. The basis for this was provided by an interferometer arrangement that had already been used for astronomical purposes by Albert A. Michelson in 1891. Ryle’s aperture synthesis worked according to the following principle: The resolution depends on the baseline, i.e. on a distance between the telescopes. More precise information about the structure of a radio source is obtained when observations are made with different distances between the antennas. By the interconnection of different spatially separated telescopes and the thereby increased angular resolution it became possible to localize exactly the radio sources on the sun, radio galaxies, quasars and other cosmic radio sources. Due to this arrangement developed by Ryle, the localization of the first pulsar succeeded in Cambridge.

For these groundbreaking achievements, he was awarded the Nobel Prize in Physics in 1974, together with Antony Hewish, the first time a Nobel Prize was awarded in recognition of astronomical research. Ryle served as lecturer in physics at Cambridge for more than a decade, he became director of the Mullard Radio Astronomy Observatory in 1957 and professor of radio astronomy in 1959. He further succeeded Sir Richard Woolley as Astronomer Royal from 1972–1982. In 1968, Sir Martin Ryle served as professor of astronomy at Gresham College, London.

In the 1970s, Ryle turned the greater part of his attention from astronomy to social and political issues which he considered to be more urgent. With publications from 1976 and continuing, despite illness until he died in 1984, he pursued a passionate and intensive program on the socially responsible use of science and technology.