You are here: Home › medical science › Archibald Hill and the Discipline of Biophysics 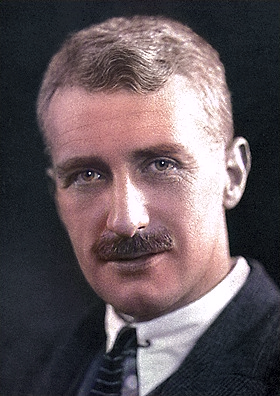 On September 26, 1886, English physiologist and Nobel Laureate Archibald Vivian Hill was born. Hill is one of the founders of the diverse disciplines of biophysics and operations research. He shared the 1922 Nobel Prize in Physiology or Medicine for his elucidation of the production of heat and mechanical work in muscles.

“One knows that after violent exercise one breathes heavily for some time: the more violent the exercise, the longer one’s respiration is laboured.”,
– Archibald Hill

Archibald Hill was born in Bristol, England in 1886. At Trinity College, Cambridge, he studied mathematics and took the Mathematical Tripos. After graduation, Hill was supported by his teacher Walter Morley Fletcher to take up physiology. Archibald Hill began studying the nature of muscular contraction in 1909 and was influenced by John Newport, back then Head of the Department of Physiology. Langley worked on the problem of lactic acid in muscle, particularly in relation to the effect of oxygen upon its removal in recovery. At the beginning of his studies, Archibald Hill used the Blix’ apparatus and gained knowledge through the papers of the works by the Swedish scientist Magnus Blix. Influenced by the latter’s works, Hill began to study the dependence of heat production on the length of muscle fibre.

Travel to Germany and World War I

During the early 1910s, Archibald Hill traveled to Germany in order to work and study with Bürker and Paschen. At Cambridge, Hill continued his work until the beginning of World War I. Hill worked on the nervous impulse along with Keith Lucas, he studied haemoglobin with Joseph Barcroft, and researched on calorimetry of animals with T. B. Wood. With the beginning of the war, Archibald Hill was appointed University Lecturer in Physical Chemistry at Cambridge. He served as captain and brevet-major, and as Director of the Anti-Aircraft Experimental Section, Munitions Inventions Department during World War I.

By 1919, Archibald Hill was able to continue his study of the physiology of muscle, and began collaborating with Otto Fritz Meyerhof through personal contact and through correspondence. Also the mathematician and engineer William Hartree helped with the myothermic investigations. In 1920, Hill was appointed Brackenburg Professor of Physiology at Manchester University where he continued the work on muscular activity and began to apply the results obtained on isolated muscles to the case of muscular exercise in man. At University College, London, Archibald Hill later became Jodrell Professor of Physiology and was was appointed the Royal Society’s Foulerton Research Professor and was in charge of the Biophysics Laboratory at University College until 1952.

Archibald Hill’s achievements on muscle function, especially the observation and measurement of thermal changes associated with muscle function, was later extended to similar studies on the mechanism of the passage of nerve impulses. Hill managed to discover the phenomenon that heat was produced as a result of the passage of nerve impulses. His best known books include Muscular Activity, published in 1926, and Muscular Movement in Man, published one year later. He was awarded the Nobel Prize for the elucidation of thermodynamic processes in muscle, while his colleague Otto Fritz Meyerhof was honored for his research into the relationship between oxygen turnover and lactic acid production. By combining the results of both researchers, a comprehensive view of muscle work with its physical and chemical side effects became possible.

In 1933, he became with William Beveridge and Ernest Rutherford [5] a founder member and vice-president of the Academic Assistance Council (which in 1936 became the Society for the Protection of Science and Learning). By the start of the Second World War, the organisation had saved 900 academics (18 of whom went on to win Nobel Prizes) from Nazi persecution.

In 1945 he served with Patrick Blackett and Henry Tizard on the committee that gave birth to radar.[4]  When the war came Hill led a campaign to liberate refugee scientists who had been interned. He served as an independent Member of Parliament (MP) for Cambridge University from 1940 to 1945. In 1940 he was posted to the British Embassy in Washington to promote war research in the still neutral United States. After the war he rebuilt his laboratory at University College and vigorously carried on research.

In 1967 he retired to Cambridge where he gradually lost the use of his legs. Archibald Hill died on 3 June 1977 in Cambridge, at age 90.