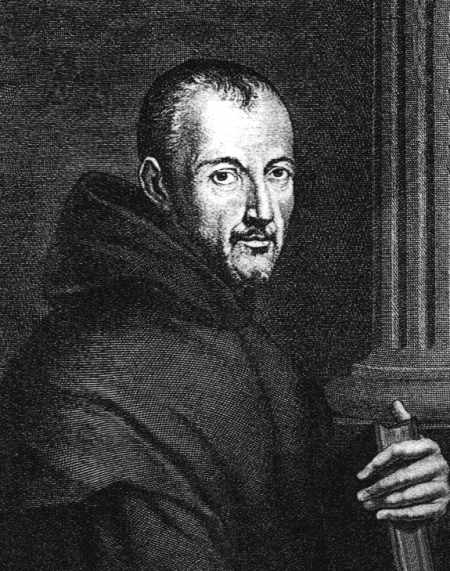 On September 8, 1588, French polymath Marin Mersenne was born. He is perhaps best known today among mathematicians for Mersenne prime numbers. He also developed Mersenne’s laws, which describe the harmonics of a vibrating string.

“Philosophy would long ago have reached a high level if our predecessors and fathers had put this into practice; and we would not waste time on the primary difficulties, which appear now as severe as in the first centuries which noticed them. We would have the experience of assured phenomena, which would serve as principles for a solid reasoning; truth would not be so deeply sunken; nature would have taken off most of her envelopes; one would see the marvels she contains in all her individuals. …”
— Marin Mersenne, Les Préludes de l’Harmonie Universelle (1634),

Mersenne was born of Jeanne Moulière, wife of Julien Mersenne, peasants who lived near Oizé, County of Maine (present-day Sarthe, France). He was educated at Le Mans and at the Jesuit College of La Flèche. On 17 July 1611, he joined the Minim Friars and, after studying theology and Hebrew in Paris, was ordained a priest in 1613. The Order of the Minims, having been set up by St Francis of Paula in 1436, was thriving at this time. They believed they were the least (minimi) of all the religions on earth, and devoted themselves to prayer, study, and scholarship. They wore a habit made of coarse black wool with broad sleeves and girded by a thin black cord (as seen in the portraits of Mersenne). Charles VIII introduced the Order into France and, due to their great simplicity, the monks were named ‘les bons hommes’.[5] Mersenne taught philosophy and theology at the convent of the Minims of Nevers, where one of his students, Hilarion de Coste, became his confidant and biographer. In 1619, he was appointed “corrector” of the College of Nevers, but towards the end of the year he obtained a professorship at the Convent of the Annunciation in Paris (Place Royale). Two years later, he became superior of his monastery, where he remained, except for brief journeys, until his death in 1648.  It is believed that the Church supported him for most of his life, although in later years a fellow monk, Jacques Hallé, helped out with money and granted him access to his library.[5]

From Scholasticism to Modern Sciences

While he initially followed a narrow-minded scholasticism, he changed sides in the middle of his life. As a vehement opponent of Aristotelism and mystical teachings (alchemy, astrology, Kabbalah, Rosicrucians), he supported the modern natural sciences, the astronomical theories of Galileo and the philosophy of René Descartes.[1] From 1623 he visited Galileo and Descartes personally, and corresponded intensively with other leading scholars such as Pierre Gassendi, Gilles Personne de Roberval, Blaise Pascal [2] and Pierre de Fermat.[3] This made him an important mediator of information and contacts between contemporary scientists. It was said that to inform Mersenne of a discovery was as much as to publish it in print. He encouraged Gassendi to respond to Descartes’ meditations; he drew Huygens‘ attention to the usefulness of the pendulum in timekeeping (which led to the invention of the pendulum clock).[5] Mersenne edited works of Euclid, Apollonius, Archimedes, and other Greek mathematicians. But perhaps his most important contribution to the advance of learning was his extensive correspondence (in Latin) with mathematicians and other scientists in many countries. At a time when the scientific journal had not yet come into being, Mersenne was the centre of a network for exchange of information.

From the beginning of his time in Paris, mathematical problems played an important role in his life. Mersenne made important contributions not only as a mediator but also as a researcher. In 1626 he published a collection of texts Synopsis mathematica on mathematics and mechanics and made contributions to acoustics and music theory as well as to optics. He also investigated cycloids. Famous is his list of – according to his conjecture – prime numbers Mp, which contains the form Mp = 2p-1, where p is also a prime number. Numbers with this property are now called Mersenne prime numbers. However, his list contained errors and was not complete. Nevertheless, it inspired generations of number theorists to continue their research. In 1644 Mersenne claimed that n is prime if p = 2, 3, 5, 7, 13, 17, 19, 31, 67, 127 and 257 but composite for the other 44 primes p smaller than 257.

The Speed of Sound

However, Mersenne was not primarily a mathematician; he wrote about music theory and other subjects. He also measured the first value for the speed of sound in air by measuring the time between the sighting of a muzzle flash and the perception of the shot. He obtained the (too high) value 448 m/s. In the Traité de l’harmonie universelle of 1636 he tried again to measure with a different method: He measured the time until the direct sound came back as an echo from a wall standing at a known distance and thus obtained the value 316 m/s. The correct value is about 342 m/s. 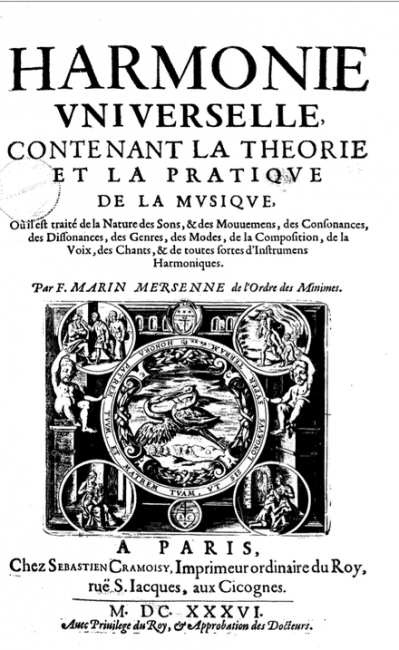 Title page of the Treaty of Marin Mersenne, Universal Harmony, 1636.

In Traité de l’harmonie universelle, perhaps Mersenne’s most influential work, he also dealt with the music theory and practice of his time – a valuable source of information on the history of music in the 17th century, including detailed descriptions and illustrations of the musical instruments known to him at the time. The work contains the earliest formulation of what has become known as Mersenne’s laws, which describe the frequency of oscillation of a stretched string. This frequency is:

Among his contributions is his proposal for the tempered semitone, which was more precise than that of the composer Vincenzo Galilei. Among his better known publications are Quaestiones celeberrimae in Genesim (1623), a pamphlet against mystical teachings, and La Vérité dans les sciences (1625, The Truth in the Sciences). During the final four years of his life, Mersenne spent a lot of time investigating the barometer.  Blaise Pascal [2] had already proved that air was not weightless and it was Mersenne who found the density of air to be approximately 1/19th of that of water.

Mersenne’s philosophical works are characterized by wide scholarship and the narrowest theological orthodoxy. His greatest service to philosophy was his enthusiastic defence of Descartes,[1] whose agent he was in Paris and whom he visited in exile in the Netherlands. He submitted to various eminent Parisian thinkers a manuscript copy of the Meditations on First Philosophy, and defended its orthodoxy against numerous clerical critics. In Paris, Mersenne was Descartes’s assiduous correspondent, auxiliary, and representative. Mersenne also asked that, after his death, an autopsy be made on his body, so as to serve to the last the interests of science.[6] He died on September 1, 1648, through complications arising from a lung abscess.

After Mersenne’s death, letters in his cell were found from 78 different correspondents including Fermat,[3] Huygens, Pell, Galileo and Torricelli. Also several physics instruments were found in his cell and a lot of Mersenne’s library was retrieved from which L’optique et la catoptrique  was published in 1651. Later all the letters he sent and received from other scholars were accumulated and published in several volumes. These letters read like an international review of mechanics in the early 17th century.