You are here: Home › explorer › John McDouall Stuart and the Exploration of Australia’s Mainland 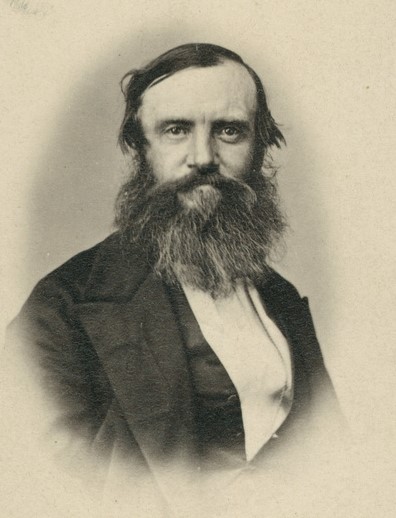 On September 7, 1815, Scottish explorer John McDouall Stuart was born. McDouall Stuart became known as one of the most accomplished of all Australia‘s inland explorers. He led the first successful expedition to traverse the Australian mainland from south to north and return, through the centre of the continent.

McDouall Stuart was born in Dysart near Kirkcaldy on the north side of the Firth of Forth, the fifth of nine children of William Stuart, an army captain who had already retired at his birth, and his wife Mary, a born McDouall. His parents died when he was a teenager. Relatives enabled him to study at the Scottish Naval and Military Academy in Edinburgh, where he graduated as a civil engineer in 1838. Afterwards he decided to emigrate to Australia. In 1839, he arrived at the frontier colony of South Australia, at that time little more than a single crowded outpost of tents and dirt-floored wooden huts. He was employed with the colony‘s Surveyor-General, working in the semi-arid scrub of the newly settled districts marking out blocks for settlers and miners and later became a Freemason.

In 1844, the Surveyor-General, Captain Sturt embarked on an expedition into the arid interior, and engaged Stuart as a draughtsman. The expedition penetrated further north than any previous attempt, at the cost of great hardship. Instead of the hoped-for inland sea, the explorers found two of the most fearsome arid areas anywhere in Australia: Sturt Stony Desert and the Simpson Desert. The the second-in-command James Poole died of scurvy and Sturt and Stuart became sick as well. While Sturt had to return to Enland, McDouall was unable to work for a whole year. However, Stuart became private surveyor, spending more and more time in remote areas, and moving to Port Lincoln for several years before moving again to the northern Flinders Ranges where he worked for the wealthy pastoralists William Finke, James Chambers, and John Chambers, exploring, prospecting for minerals, and surveying pastoral leases.

In 1858, McDouall Stuart set out for his first expedition which was financed by William Finke. He wanted to find minerals, a land which the Aborigines called Wingillpinin, and new grazing land in the north-west of South Australia. He reached the vicinity of Coober Pedy before shortage of provisions and lack of feed for the horses forced him to turn towards the sea 500 kilometres to the south. The expedition increased Stuart’s reputation and Stuart received a gold watch from the Royal Geographical Society.

In the following year, Stuart set off for his second expedition with a party of three men and 15 horses. They again explored the north, aiming to reach the border between South Australia and what is now the Northern Territory, but had to turn back about 100 kilometres short of the border because they had no more horse shoes. Still, they had found another reliable water supply for future attempts by the then-unknown Great Artesian Basin.

Back then the Victorian Exploring Expedition, to be led by Robert O’Hara Burke sett off as the biggest and most lavishly equipped expedition in Australia’s history. The South Australian government offered a reward of £2,000 to any person able to cross the continent through the centre and discover a suitable route for the telegraph from Adelaide to the north coast. Stuart’s friends and sponsors, James & John Chambers and Finke, asked the government to put up £1,000 to equip an expedition to be led by Stuart. The South Australian government, however, ignored Stuart and instead sponsored an expedition led by Alexander Tolmer, which failed. McDouall Stuart however had other issues. Some of the land he had claimed and surveyed in the Chambers Creek district on his second trip had in fact already been explored and claimed by people attracted to the area by reports of Stuart’s first trip. Stuart needed to return to Chambers Creek to re-survey his claims. He left Adelaide with a small party in August 1859. Having surveyed his own claim and several new claims on behalf of his sponsors, Stuart spent the spring and summer exploring the area west of Lake Eyre, finding several more artesian springs.

In 1860, Benjamin Head, William Kekwick and John McDouall Stuart set off for another expedition with the goal to find the center of Australia. They found Finke River and followed it north-west over the South Australian border to the MacDonnell Ranges, which he named after Sir Richard Graves MacDonnell, Governor of South Australia, on 12 April 1860. According to Stuart, the men reached the centre of the continent on 22 April 1860. The progress traveling further north was slow. At first the party did not have enough water and suffered from scurvy. Later, they were raided by hostile Aboriginals and the explorers decided it was too unsafe to continue. Stuart reached Adelaide in October 1860. Although he had narrowly failed to cross the continent, his achievement in determining the centre was immense.

In 1861, John McDouall Stuart and another expedition party set off to to return north with about 12 men and 49 horses. When they reached Attack Creek in April 1861, there was no sign of hostile tribesmen this time.The party planned to march north-west towards the known region of Victoria River, which had been mapped by A.C. Gregory in 1858. Stuart found and named Newcastle Water where they stayed for a few weeks. In September, they reached the settled regions of South Australia. As soon as McDouall Stuart learned that Burke and Wills were missing [4] he immediately offered to join the search for them. The first rescue teams had left some time earlier, however, and soon returned with the news that no less than 7 members of the largest and best-equipped expedition in Australia’s history had died.

By then the South Australian government was initially reluctant to back a sixth effort. However, the prospect of establishing a route for an overland telegraph line became a significant factor. Stuart’s sixth expedition was officially launched at James Chambers’ home at North Adelaide in October 1861. The party comprised 10 men and 71 horses. The party made good time to Newcastle Waters, reaching that point on 5 April, and experiencing conflict with the local Aborigines once again. Stuart led a scouting party north, finding good water for the main body to move up to. However, the explorers faced some difficulties: Five times Stuart and his scouts tried to find a route towards Victoria River without success. Finally he headed north rather than north-west and was rewarded with a series of small waterholes leading to Daly Waters, about 150 kilometres north of Newcastle Waters. On 24 July 1862 Stuart reached the beach at Chambers Bay (east of present-day Darwin). He and his Companions had crossed the continent from south to north.

At yovisto academic video search, you may join Shane Carmody, Director, Collections and Access, State Library of Victoria, in conversation with leading historians and researchers Professor Geoffrey Blainey, Robyn Annear and David Phoenix to find out what the rich collection of records and artefacts tells us about the Victorian Exploring Expedition.