You are here: Home › art › Maria Sibylla Merian and her Love for Nature’s Details 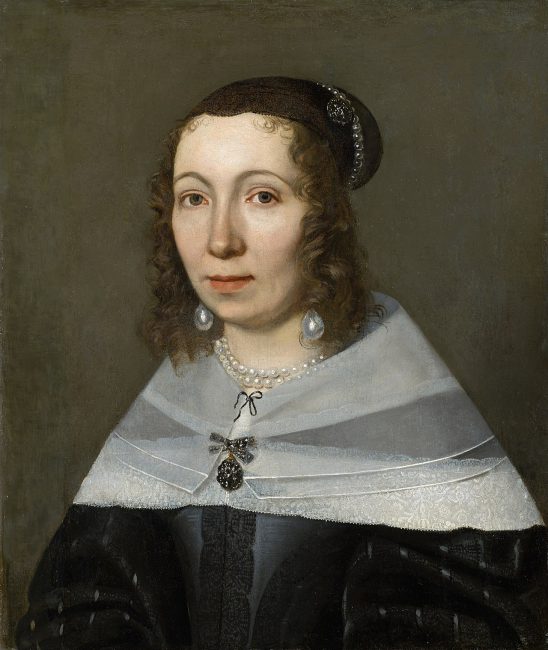 On April 2, 1647, the German naturalist and scientific illustrator Maria Sibylla Merian was born. Even though she is not very well known for her achievements, she made significant contributions to entomology through the observation and documentation of the metamorphosis of the butterfly.

“Art and nature shall always be wrestling until they eventually conquer one another so that the victory is the same stroke and line: that which is conquered, conquers at the same time.”
– Maria Sibylla Merian, as quoted in [9]

The Birth of Entomology

The fact that Maria Sibylla Merian is not well known throughout the scientific community is probably caused by the fact that the study of nature and entomology in general only slowly developed after the medieval era. During the middle ages, insects were seen as organisms that evolved from lazy mud and were unworthy of being studied scientifically. It was Francesco Redi in the 1660’s, who was able to disprove this general opinion. Until then, only about two known books concerning insects existed and they probably laid the foundations of entomology.

Maria Sibylla Merian was born in 1647 as the daughter of Matthew Merian the Elder and his second wife Johanna Catharina Sibylla Home. Her father was a publisher and engraver in Frankfurt, editor of the Theatrum Europaeum and the topographies, and well known for his frequently reproduced views of the city.  He died only three years later. In the following year the widow married the flower painter Jacob Marrel, a pupil of the Flemish School of Painting, who set up a studio in Frankfurt but continued his flourishing art trade in Utrecht and rarely stayed with his family. Maria Sibylla Merian succeeded to convince her step father to study arts in early years and at age 11, she was already able to make her own copperplate engravings. She started to cultivate silk worms and other insects at her home. Merian began to create very detailed drawings of the studied organisms in a scientific, but also religious sense, since insects were seen as devilish vermins (“Teufelsgeziefer“) by most Christians back then. 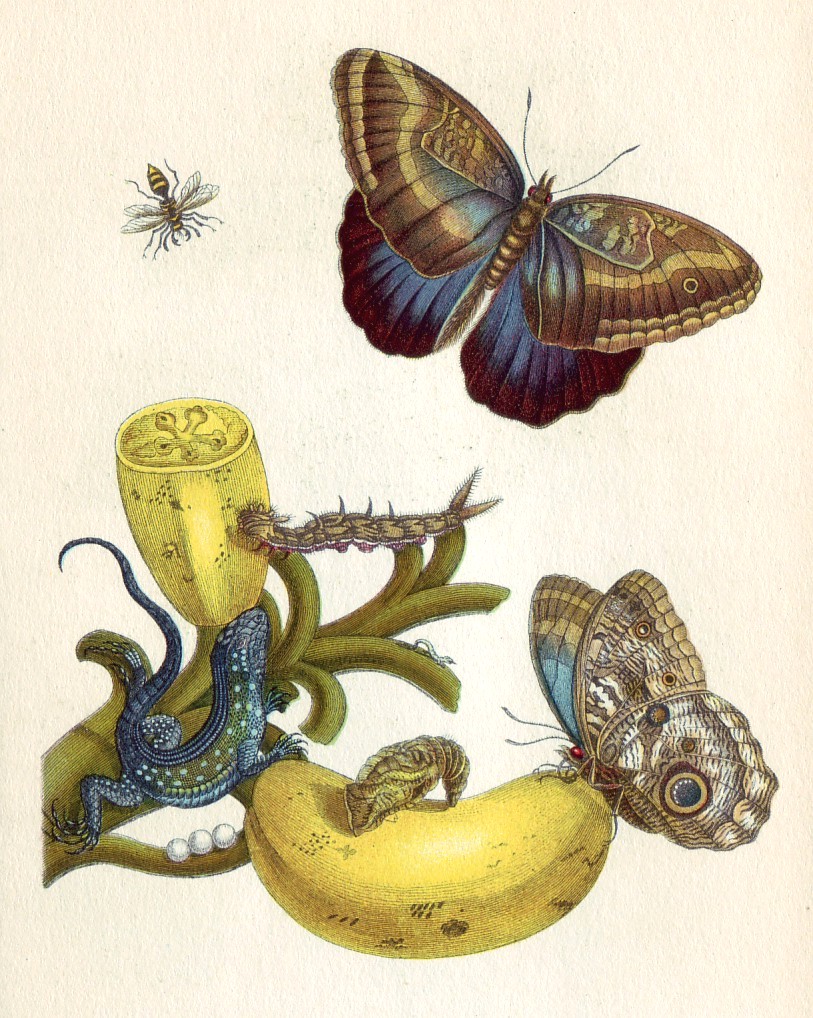 In 1670 the family moved to Graff’s birthplace Nuremberg. Maria Sibylla had to contribute to securing their livelihood through a variety of activities. During her time in Nuremberg, Merian taught women how to paint and draw plants. To support these lessons, Merian made copper engravings as models, which became the basis of her first book publication. The New Flower Book was intended as a model book for embroidering ladies. One of the books, and her most influential at this time contained her long time observations of nature and its plants and insects. It was seen as a significant contribution to entomology but Merian really intended to continue the search for God especially in the most “insignificant” animals on Earth. A little later she published her caterpillar book in two parts (1679 and 1683): The caterpillar’s wonderful transformation and strange flower food contained the results of her many years of observations. Here we find the principle of composition that she also applied to her later works: each sheet shows the developmental stages of the insects in connection with the plants that serve them as food.

In 1685, after twenty years of marriage at the age of 38, Merian decided, together with her mother and her two daughters (then 17 and 7 years old), to go for an indefinite period to Walta-State Castle near Wieuwerd in Friesland, the Netherlands. Her stepbrother Caspar had been there since 1677 and had asked her to do so. The castle belonged to three sisters of the Governor of Suriname, Cornelis van Aerssen van Sommelsdijk. During this time she began to create her “study book”. In it she collected small watercolours on parchment and noted down observations of the caterpillars and butterflies depicted from earlier years. In 1699, Maria Sibylla Merian  sold a large part of her collections and paintings to finance the journey to Suriname for two years, since she was impressed by the many insects people from Europe had discovered coming from the hot and humid country. Although friends and acquaintances urgently advised her not to travel to Surinam because of the extreme climate there, Maria Sibylla Merian did not let her plans change her mind. She traveled through the jungles where she observed, drew and arranged each butterfly in the superfamilies of Papilionoideae and Hedylidae, which still are valid up to this day. She took their plant names from the language of the Indians. After a two-year stay, the now 54-year-old Merian was no longer able to cope with the efforts and fell seriously ill with malaria.

Back in Amsterdam, Merian’s observations were revised and exhibited. She also published a book with carefully drawn plants and insects with an amazing level of detail. Despite her scientific success and her well deserved reputation, she could not afford living from her achievements, wherefore she continued teaching. Maria Sibylla Merian was one of the first researchers to study insects systematically, knowing and writing about their metamorphosis. She was known for her unusual life style, especially the fact that a woman in 1700 traveled without a man’s protection through the jungle shocked society. Two years before her death, she suffered a stroke and could only move in a wheelchair afterwards. Even though, Merian passed away as a rather poor person on January 17, 1717, she was honored numerous times posthumously for her scientific and artistic works.

Maria Sibylla Merian was one of the first researchers to systematically observe insects and find out about their actual living conditions. She was able to show that each species of butterfly as a caterpillar depends on a few forage plants and lays its eggs only on these plants. In particular, the metamorphosis of the animals was largely unknown. Although some scholars knew about the transformation of caterpillars into adult butterflies, further circles of the population, but also many more educated, the process was foreign. Merian made a decisive contribution to changing this process.