You are here: Home › engineering › Apple 1 and the Homebrew Computer Club 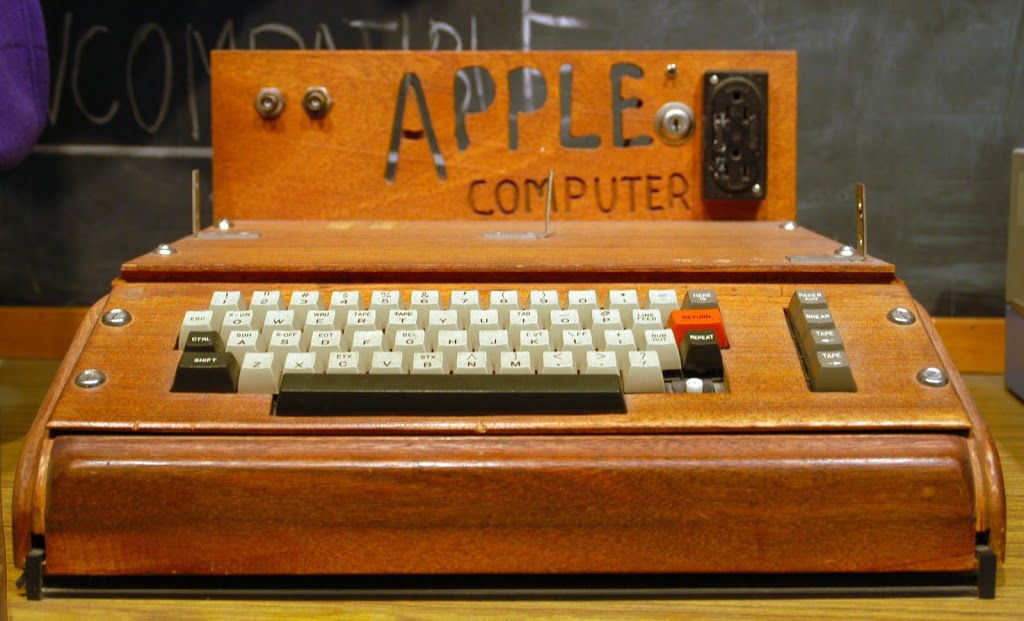 Apple I on Display at the Smithsonian (© Ed Uthman)

On April 1, 1976, Steve Jobs, Steve Wozniak and Ron Wayne (who dropped out shortly after) founded the Apple Computer Company. The company’s first product, the Apple I was demonstrated for the first time at the Homebrew Computer Club in Palo Alto, California.

Steve Wozniak met Steve Jobs became friends already in 1970, when Jobs worked for the summer of 1975 at Hewlett-Packard (HP), where Wozniak was working on a mainframe computer. While working for Hewlett-Packard, Wozniak wanted to build his own computer. He couldn’t afford the Intel 8080 CPU (this CPU was very popular then, as it was used in the Altair 8800, but was pretty expensive). Finally he decided to build his computer around the $25 MOS 6502. The costs for the required components had fallen to such an extent that even inexpensive home applications should be possible. Overall, the Apple I was the result of the development efforts of Steve Wozniak, Steve Jobs, and also Ron Wayne. The computer itself was developed, not in a garage, but in the bedroom of Steve Wozniak’s home in Los Altos. While Steve Wozniak built the printed circuit-board and programmed the operating system, Ron Wayne wrote the Apple-1 Operation Manual at his home and Steve Jobs did what he always did best, advertising the Apple I to friends and family.

With the Apple I design, Wozniak and Jobs were largely working to impress other members of the Palo Alto-based Homebrew Computer Club, a local group of electronics hobbyists interested in computing, which Jobs and Wozniak visited since 1975. The Club was one of several key centers which established the home hobbyist era, essentially creating the microcomputer industry over several years. Unlike other Homebrew designs, the Apple had an easy-to-achieve video capability that drew a crowd when it was unveiled.

Wozniak succeeded in developing a particularly inexpensive computer thanks to a clever design and the economical and unusually efficient use of the chips. Thanks to the typewriter keyboard and screen (initially in the form of a converted TV set), it was easy to use for the conditions of the time and at the same time affordable for private households, making it available to a completely new market. The Apple I was the world’s first mass-produced personal computer (PC for short). According to Wozniak’s autobiography, iWoz, Jobs had the idea to sell the Apple I as a fully assembled printed circuit board. Wozniak, at first skeptical, was later convinced by Jobs that even if they were not successful they could at least say to their grandkids they had had their own computer company. Together they sold some of their most precious possessions, such as Wozniak’s HP scientific calculator and Jobs’ Volkswagen van, raised $1,300, and assembled the first boards in Jobs’ bedroom. On April 1, 1976, Jobs, Wozniak and Wayne formed Apple Computer. Wozniak quit his job at Hewlett-Packard and became the vice president in charge of research and development at Apple.

The Apple I Design

The Apple I, was similar to the Altair 8800, the first commercially available microcomputer, except it had no provision for internal expansion cards. The Apple I was purely a hobbyist machine, a MOS 6502 microprocessor on a single-circuit board with 256 bytes of ROM, 4K or 8K bytes of RAM and a 40-character by 24-row display controller. It lacked a case, power supply, keyboard, or display, which had to be provided by the user. The only peripheral device available was a cassette interface, which, in combination with a conventional cassette recorder, could be used to store programs on audio cassettes and load them again. Only with this interface was it possible to use the Integer BASIC programming language, which at that time was still called Apple BASIC, because the interpreter had to be loaded from the cassette because it was not yet in the ROM. Without the interface the computer could only be programmed via a machine language monitor. The Apple I was priced at $666.66 – because Wozniak “liked repeating digits” – and it was an immediate success. At least when you consider that they sold their first 50 system boards to Paul Terrell, who was starting a new computer shop, called the Byte Shop, in Mountain View, California. In April 1977 the price was dropped to $475. It continued to be sold through August 1977, despite the introduction of the Apple II in April 1977, which began shipping in June of that year.

The Computer Chronicles on ‘Computer Entrepreneurs‘.