You are here: Home › archeology › Maria Reiche – Keeper of the Nazca Lines 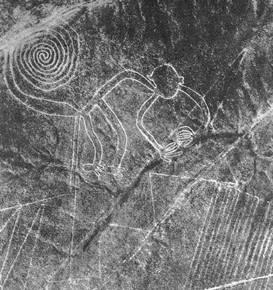 Nazca Monkey, This aerial photograph was taken by Maria Reiche, one of the first archaeologists to study the lines, in 1953.

On May 15, 1903, German-born Peruvian mathematician and archaeologist Maria Reiche was born. Reiche was the self-appointed keeper of the Nazca Lines, a series of desert ground drawings over 1,000 years old, near Nazcain in southern Peru. For 50 years the “Lady of the Lines” studied and protected these etchings of animals and geometric patterns in 60 km of desert. In 1995 the Nazca Lines were declared a UNESCO World Heritage Site.

Maria Reiche was born in Dresden as the eldest of three children of Felix Reiche-Grosse and his wife Elisabeth. After attending the Städtische Studienanstalt für Mädchen in Dresden, she studied mathematics, physics and geography at the Technische Hochschule Dresden and passed her state examination in 1928. In 1932 she accepted a position as a house teacher at the German Consul in Cusco, Peru. Before the end of her contract she went to the capital Lima. There she lived from casual jobs, language lessons and translations.

In 1934, she lost one of her fingers to gangrene. That same year, she became a teacher in Lima and made scientific translations. When World War II broke out, German citizens were detained in Peru. Since 1937 she has helped to restore historical fabrics at the National Museum Lima. In 1939 she first heard from the US scientist Paul Kosok about the Nazca lines discovered in 1924.  In 1940, Reiche became an assistant to Paul Kosok, an historian from Long Island University in Brooklyn, New York. Making field studies from 1939–1941 and 1948–49, Kosok is credited as the first Westerner of European descent to seriously investigate the Nazca Lines. The Nazca Lines are a series of large ancient geoglyphs in the Nazca Desert, in southern Peru. The largest figures are up to 370 m long. There are about 300 figures among them including geometric shapes, animal like figures, straight continuous lines, humans and plants. The creation of the Nazca Lines is attributed to the pre-Inca Nazca culture that flourished in the area between 200 and 600 AD.[1]

The first mention of the Nazca Lines in print was by Pedro Cieza de León in his book of 1553, where he mistook them for trail markers.[6] Although partially visible from the nearby hills, the first to distinguish them were Peruvian military and civilian pilots. In 1927 the Peruvian archaeologist Toribio Mejía Xesspe spotted them while he was hiking through the foothills.

What is their Purpose?

Kosock originally studied them in connection with field work on ancient irrigation systems, but quickly concluded they had another purpose. He flew over the lines and realized one was in the shape of a bird. Another chance helped him see how lines converged at the winter solstice in the Southern Hemisphere. He began to study how the lines might have been created, as well as to try to determine their purpose.

The spider, one of the large petroglyphs of the Nazca plane is 47 m long

The Benefit of having a Mathematical Background

Together he and Reiche began to map and assess the lines for their relation to astronomical events. Later Reiche found lines converging at the summer solstice. Around 1946, Reiche began to map the figures represented by the Nazca Lines and determined there were 18 different kinds of animals and birds. After Kosok left in 1948, she continued the work and mapped the area. She used her background as a mathematician to analyze how the Nazca may have created such huge-scale figures. She found these to have a mathematical precision that was highly sophisticated. But determining how they were made has been easier than figuring why they were made. On the ground, most of the lines are formed by a shallow trench with a depth between 10 and 15 cm. Such trenches were made by removing the reddish-brown iron oxide-coated pebbles that cover the surface of the Nazca Desert. When this gravel is removed, the light-colored clay earth which is exposed in the bottom of the trench produces lines which contrast sharply in color and tone with the surrounding land surface. Reiche theorized that the builders of the lines used them as a sun calendar and an observatory for astronomical cycles.

The Mystery on the Dessert

Because the lines can be best seen from above, she persuaded the Peruvian Air Force to help her make aerial photographic surveys. She worked alone from her home in Nazca. Reiche published her theories in the book The Mystery on the Desert (1949), which had a mixed response from scholars. Eventually scholars concluded that the lines were not chiefly for astronomical purposes, but Reiche’s and Kosok’s work had brought scholarly attention to the great resource. It is widely believed that they were used as part of worship and religious ceremonies related to the “calling of water from the gods.” The extremely dry, windless, and constant climate of the Nazca region has preserved the lines well. This desert is one of the driest on Earth and maintains a temperature around 25 °C all year round. The lack of wind has helped keep the lines uncovered and visible. At the age of 52 Maria Reiche had herself tied to the runners of a helicopter outside the pulpit in order to take better aerial photos of the giant pictures. The close-ups made them world-famous.

Reiche used the profits from the book to campaign for preservation of the Nazca desert and to hire guards for the property and assistants for her work. Wanting to preserve the Nazca Lines from encroaching traffic, after one figure was cut through by the Pan American Highway government development, Reiche spent considerable money in the effort to lobby and educate officials and the public about the lines. After paying for private security, she convinced the government to restrict public access to the area. She sponsored construction of a tower near the highway so that visitors could have an overview of the lines to appreciate them without damaging them.

Maria Reiche died on 8 June 1998 at the age of 95,  after contributing 40 years of her life to the study and conservation of the lines. Reiche was buried in Nazca next to the hut where she had lived for over 25 years.

Anthony Aveni, “Patterns on the Pampa: Secrets of the Nazca Lines“, [7]