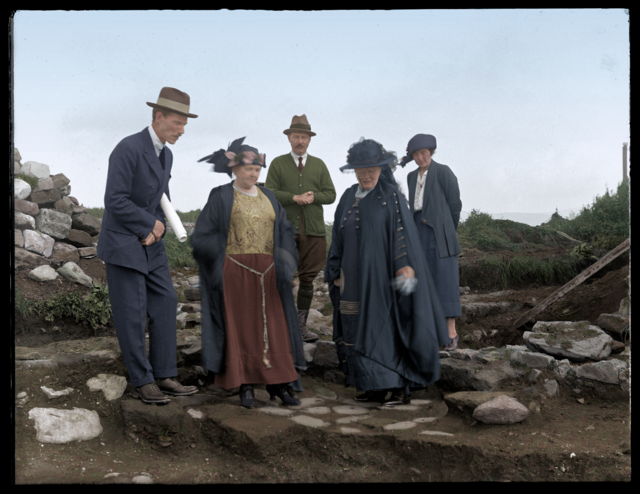 On July 22, 1976, British archaeologist Sir Robert Eric Mortimer Wheeler passed away. Wheeler is recognised as one of the most important British archaeologists of the twentieth century, responsible for successfully encouraging British public interest in the discipline and advancing methodologies of excavation and recording. Further, he is widely acclaimed as a major figure in the establishment of South Asian archaeology.  However, many of his specific interpretations of archaeological sites have been discredited or reinterpreted and he was often criticised for bullying colleagues and sexually harassing young women

“Archaeology is not a science, it’s a vendetta.” (Sir Mortimer Wheeler, as quoted, without citation, in [6])

Inspired By the Moors

Mortimer Wheeler was born on 10 September 1890 in the city of Glasgow, Scotland, as the first child of the journalist Robert Mortimer Wheeler and his second wife Emily. At age of four, Wheeler’s father was appointed chief leader writer for the Bradford Observer and the family relocated to Saltaire, a village northwest of Bradford, Yorkshire. Wheeler was inspired by the moors surrounding Saltaire and fascinated by the area’s archaeology. After education at Bradford Grammar School, in 1907 Wheeler passed the entrance exam on his second attempt and was awarded a scholarship to read classical studies at University College London (UCL). He continued his studies with a Master of Arts degree in classical studies, which he attained in 1912. During his studies, Wheeler had developed his love of archaeology, having joined an excavation of Viroconium Cornoviorum, a Romano-British settlement in Wroxeter, in 1913.

Excavations of Roman Remains in England

After the United Kingdom’s entry into World War I in 1914, Wheeler volunteered for the armed forces, first as instructor in the University of London Officer Training Corps and later at the Royal Field Artillery, which in 1917 was stationed in Belgium. After the German surrender, he moved back to London in July 1919. Wheeler directed excavations of Roman remains in Essex in 1919–20. He received a Ph.D. from the University of London in 1920. In the same year he became a lecturer in archaeology at the University of Wales. In 1922, he was made a Fellow of University College, London, which he held until his death.[2] Then he conducted excavations in Wales (1921–27) and in Hertfordshire (1930–33), where he unearthed a pre-Roman settlement near St. Albans. Excavating at Maiden Castle in Dorset (1934–37), he found evidence of a settlement dating from the Neolithic Period, prior to 2000 bce. He conducted further excavations in Brittany and Normandy (1938–39).[1] Between 1920 and 1926, Wheeler was Director of the National Museum of Wales, and from 1926 to 1944, Keeper of the London Museum at Lancaster House. In 1934, he was made lecturer of the London University’s new Institute of Archaeology.[2] 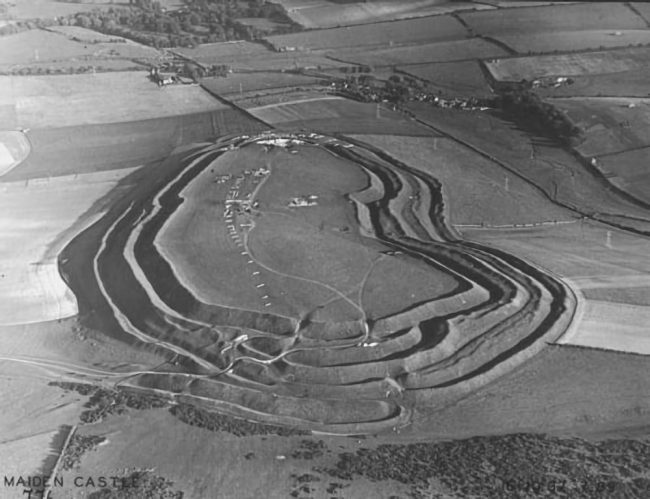 An aerial view of Maiden Castle in Dorset from the west. Wheeler led excavations at the Iron Age hill fort of Maiden Castle. Photograph by Major George Allen, October 1937

The excavation methods he used, for example the “grid system” (later developed further by Kathleen Kenyon, and known as the Wheeler-Kenyon method), represented significant advances in archaeological methodology. It involved the digging of 5×5-meter-square series, set within a larger grid. [2]. Each square clearly separated by a narrow baulk that was never excavated. This method permitted an area to be excavated yet preserved a vertical cross-section that revealed the strata of the site as the trench was dug. Wheeler’s box-grid system has been used universally in modern archaeology and although less popular in Europe it is still the most simple method to ensure a systematic approach.[3]

Retirement from the Army

In 1944, at 54 years old, Wheeler retired from the Army to become Lecturer in Archaeology at the University College of Cardiff. He was also named Director-General of the Archaeological Survey of India, exploring in detail the remains of the Indus Valley Civilization at Mohenjo-Daro. He trained the first group of Indian archaeologists after India became independent.[2]

Wheeler became Professor of Roman Archaeology at the University of London’s Institute of Archaeology in 1948. He was named secretary of the British Academy in 1949, which he held until 1968. Beginning in 1952, Wheeler used this position to make radio and television appearances (among the earliest to do so), popularizing archaeology to the public. His television shows included the hugely popular “Animal, Vegetable, Mineral?” (running 1952-1960), featured another art historian, Thomas Bodkin (q.v.). This was followed by “Buried Treasure” (running 1954-1959), and “Chronicle” (1966). He was knighted in 1952. He retired from the University of London in 1955. In 1964 he authored a book on Roman art for Praeger publishers, Roman Art and Architecture.[4]

Wheeler is recognised as one of the most important British archaeologists of the twentieth century, responsible for successfully encouraging British public interest in the discipline and advancing methodologies of excavation and recording. Furthermore, he is widely acclaimed as a major figure in the establishment of South Asian archaeology. However, archaeologist Max Mallowan, husband of famous author Agatha Christie, spoke with great respect of Wheeler, who, however, had other character weaknesses besides his infidelity. He used people and dropped them when he no longer needed them and was often merciless in his judgment. He was a notorious self-promoter to the press. Nevertheless, his merit lies above all in making archaeology part of the consciousness of large sections of the population, while the practical work was probably done more by his wife. After suffering a stroke, Robert Eric Mortimer Wheeler died on 22 July 1976 at age 85.