You are here: Home › archeology › The Venus of Willendorf and its Controversial Interpretation 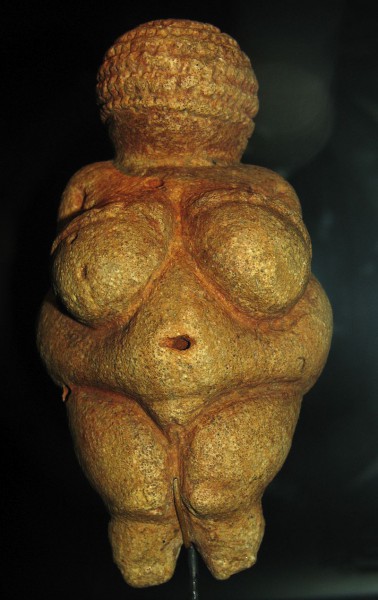 On August 7, 1908, among railway construction work on the Donauuferbahn in Lower Austria, a lime stone figure was discovered, the Venus of Willendorf. The high statuette of a female figure estimated to have been made between about 28,000 and 25,000 BCE.

The Willendorf hamlet is located near today’s Aggsbach, a small wine-growing town in the Krems-Land district of Lower Austria. Wilendorf had already been known as a Palaeolithic site for over 20 years when, in 1908, systematic excavations of the Natural History Museum of the Imperial Court in Vienna led by Josef Szombathy, the curator of the anthropologic-prehistoric collection of the museum, and two young scientists Hugo Obermaier and Josef Bayer began. Local collectors had been investigating at the sites Willendorf for many years. Already in the late 1870s, the owner of the Brunner brickyard at Willendorf had found flint tools there and initial archaeological investigations had been carried out in 1884. At the end of the 1880s, bones were discovered during digging for a new clay pit on the Ebner property, resulting in a second excavation of this site in 1890. Again, remains of human skeletons were reported to have been discovered while digging for clay between 1904 and 1905.[3] In 1908, when the railroad cut through the loess at Willendorf, seven Palaeolithic layers could be distinguished at first sight. Szombathy, Bayer and Obermaier knew at once that this would be an excellent opportunity to study the cultural development of the Upper Palaeolithic in Central Europe.[1]

The Discovery of a Prehistoric Statuette

Obermaier directed the excavation on behalf of the museum supervised by Szombathy and was responsible for the documentation while Josef Bayer took care of administrational issues. In the morning of the 7th of August Bayer, Obermaier and the employed workers carefully scraped off a horizon with only few stone tools, while Szombathy paid a visit to the excavation in order to control the progress of the works. On that very day, Johann Veran, one of the workers, found the statuette, which is referred to as the “Venus I from Willendorf“.

The earliest notice of its discovery appeared in a report by the Yale anthropologist George Grant MacCurdy (1863-1947) who happened to be in Vienna in the summer of 1908. Although the greater part of the collection of finds from the site had not yet been unpacked, MacCurdy reported excitedly that before he left Vienna Szombathy had very kindly shown him a single remarkable specimen – a human figurine, full length, carved out of stone.[5]

The Venus of Willendorf

The Venus I from Willendorf is a rather realistic representation of an obese woman which combines the natural form with the stylistic scheme of palaeolithic statuettes reflecting past transcendental ideas. The composition of the body is symmetrical, only the head seems to be turned slightly to the right.[1] After a wide variety of proposed dates, following a revised analysis of the stratigraphy of its site in 1990, the figure was estimated to have been carved 24,000–22,000 BCE, but more recent estimates have pushed the date back “slightly” to between about 28,000 and 25,000 BCE. It is believed that the figure was carved during the Paleolithic Period, also known as the “Old Stone Age“, which started around 30,000 BCE.

Very little is known about its origin, method of creation, or cultural significance; however, it is one of numerous Venus figurines or representations of female figures surviving from the Paleolithic period. Archeologists have suggested many different ways of understanding its significance for the nomadic society which made it. The purpose of the carving is the subject of much speculation. Like many figurines, it never had feet and does not stand on its own, though it might have been pegged into soft ground. Parts of the body associated with fertility and childbearing have been emphasized, leading researchers to believe Venus of Willendorf may have been used as a fertility goddess.

Apart from being female, the statue has an enlarged stomach and breasts, its pubic area is greatly emphasized, probably serving as a representative of procreativity, and the red ochre pigment covering it has been thought to symbolize or serve as menstrual blood seen as a life giving agent. The second suggestion is that the figurine may have served as a good luck charm. Its diminutive size led archaeologists to assume that it may have been carried by the men during their hunting missions in which it served not only as a reminder of their mate back at home but also as a charm to bring them success in their hunting.[4]

The figure has no visible face, her head being covered with circular horizontal bands of what might be rows of plaited hair or a type of headdress. Alternatively, the head may have simply been textured for use as a handle. The nickname, urging a comparison to the classical image of “Venus”, is now controversial. According to Christopher Witcombe, “the ironic identification of these figurines as ‘Venus’ pleasantly satisfied certain assumptions at the time about the primitive, about women, and about taste“.