You are here: Home › literature › Marcus Aurelius – the Philosopher on the Emperor’s Throne 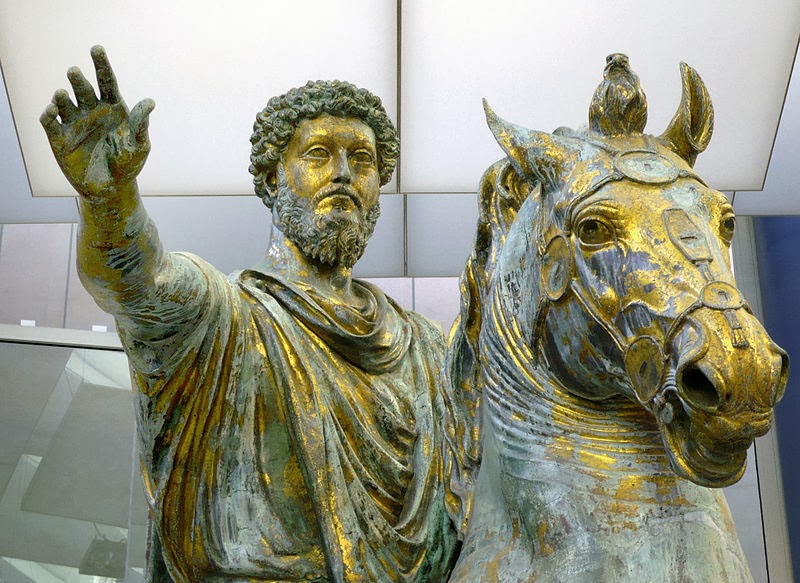 The Statue of Marcus Aurelius in the Musei Capitolini in Rome

On March 17, 180 AD, Roman Emperor Marcus Aurelius passed away. He is often referred to as the philosopher on the emperor‘s throne and considered on of the most important Stoic philosophers.

Taking Up the Dress and Habit of a Philosopher

The young Marcus was probably taught at home, and was highly influenced by the painter Diognetus, who was supposed have introduced Marcus to philosophy. Diognetus even achieved that Marcus took up the dress and habits of the philosopher. It became normal for the young student to study while wearing his rough Greek cloak and to sleep on the floor. Only his mother was then able to convince him to sleep in a regular bed again. In about 136, emperor Hadrian selected Lucius Aelius Verus as his successor, and adopted him as his son, but he became ill and passed away before being able to speak to the senate. Aurelius Antoninus became Hadrian’s successor and was adopted on 25 February in 138. As a result, Antoninus adopted Marcus and Lucius Verus, wherefore Marcus became Marcus Aelius Aurelius Verus. When Marcus learned that he was adopted, he only left his mother’s house with reluctance, moving into Hadrian’s private home. Before turning 24, Marcus became a quaestor and served under consul Antonius. When Hadrian passed away, Antonius’ succession went by peaceful, since he kept Hadrian’s nominees in office and appeased the senate, which asked him to accept the name ‘Pius’.

In 140, Marcus was made consul and was appointed as a seviri, one of the knights’ six commanders, at the order’s annual parade on 15 July 139. After becoming princeps iuventutis, Marcus took the name Caesar and at the senate’s request, Marcus joined all the priestly colleges. Still, the philosopher had to take his duties as consul very seriously and it is assumed that he felt drowned in paperwork and oratorical practices. When Marcus married Faustina, coins were issued with the heads of the couple.

“You will find rest from vain fancies if you perform every act in life as though it were your last.”
– Marcus Aurelius, Meditationes (161-180)

To improve his oratory practice, Marcus worked together with three tutors in Greek and another in Latin. Even though one of his tutors, Atticus, thought of stoicism as foolish, Marcus would become a Stoic. Between his Latin coach Fronto and Marcus, an important relationship evolved and an important correspondence between the two survived. Marcus is supposed to have written: “Farewell my Fronto, wherever you are, my most sweet love and delight. How is it between you and me? I love you and you are not here“. However, it is assumed that Fronto warned Marcus against studying philosophy, looking down on Marcus for turning to philosophy to escape the constant exercises of oratorical training. Furthermore, historians believe that Apollonius may have introduced Marcus to Stoic philosophy. 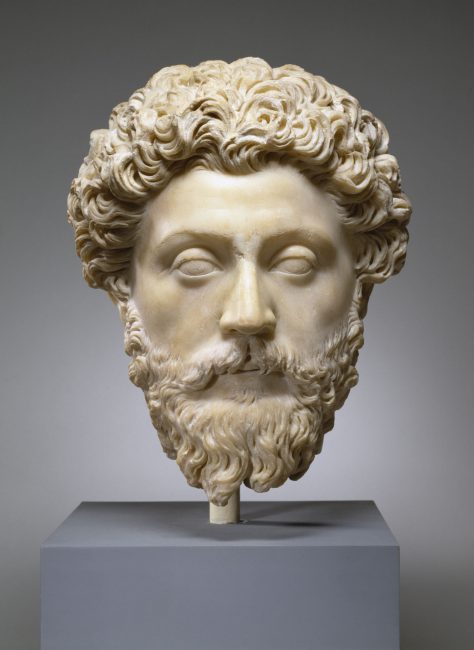 As Antonius aged, Marcus had to take over more and more administrative duties and he was along with Lucius designated joint consuls. At one night, the sick Antonius ordered that the golden statue of Fortune, which had been in the bedroom of the emperors, should go to Marcus’ bedroom. It is reported that shortly after, that he turned over and passed away. Marcus became effectively sole ruler of the Empire and the senate would soon grant him the name Augustus and the title imperator, and he would soon be formally elected as Pontifex Maximus. However, Marcus was not really thrilled to take imperial power since he always preferred the life of a philosopher. Marcus insisted, that Lucius received equal powers even though the senate wanted him to rule by himself, which was quite rare. It was then the first time, that Rome was ruled by two emperors. It is believed, that the two emperors permitted free speech and the first period of Marcus’ reign went by smoothly. He was even able to continue studying philosophy.

Both emperors were confronted within a short time with a situation that had changed in comparison to the previous decades of external peace, when from 161 onwards the Parthians questioned the eastern border of the Roman Empire and the Germanic tribes in the Danube region seriously pushed the northern border from 168 onwards. The division of tasks between the two emperors revealed that Mark Aurel actually ruled the empire, while his adoptive brother Lucius Verus was responsible for important military operations until his death. Already in the initial phase of the reign of Mark Aurelius, internal burdens for the Roman Empire resulted from a devastating Tiber flood and above all from a plague epidemic (so-called Antoninian plague), which had been introduced in 166/7 by the troops returning from the east and afflicted almost the entire Roman Empire as well as the densely populated capital Rome. 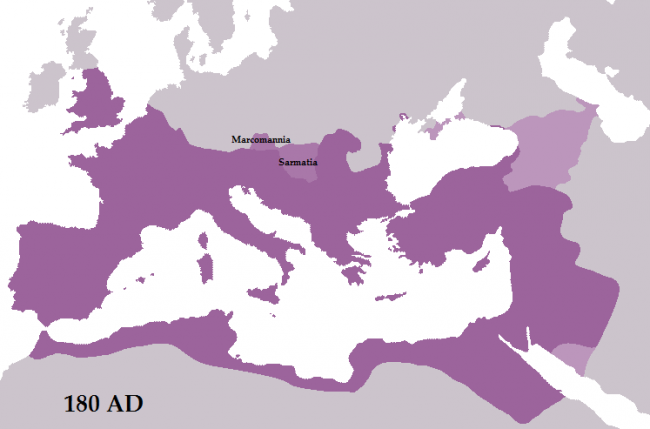 The Roman Empire during the reign of Marcus Aurelius. His annexation of lands of the Marcomanni and the Jazyges – perhaps to be provincially called Marcomannia and Sarmatia – was cut short in 175 by the revolt of Avidius Cassius and in 180 by his death. The light pink territory to the east is Roman dependencies – the Kingdoms of Armenia, Colchis, Iberia, and Albania.

According to his self-portrayal as Stoic on the imperial throne, Mark Aurel concentrated his governmental action, as long as it was possible for him, on the inner structures of the empire. Particular attention was paid to the weak and disadvantaged of Roman society, slaves, women and children, whose situation he sought to alleviate. Only with significant efforts also with regard to war financing (see above) and with a temporary expansion of the recruiting base of the army, e.g. to gladiator slaves, were the Romans subsequently able to regain a foothold in the Germanic apron beyond the Danube, to repulse the attackers and to play off the various Germanic tribes against each other, depending on their assessment of reliability, by giving them different preferential treatment when concluding contracts.

The Death of a Philosopher

On August 3, 178, Mark Aurel and Commodus set out for the second Markoman War. On this campaign the emperor died on 17 March 180, either according to Aurelius Victor in Vindobona, today’s Vienna, or following his contemporary Tertullian in the camp Bononia near Sirmium of an illness not known to us. However, some scientists assume that the Antoninian plague was the cause of death, others suspect cancer. He was immediately deified and his ashes were returned to Rome, and rested in Hadrian’s mausoleum (modern Castel Sant’Angelo) until the Visigoth sack of the city in 410. Marcus Aurelius was succeeded by his son Commodus, whom he had named Caesar in 166 and with whom he had jointly ruled since 177. He was always and still is referred to as a philosopher king. The historian Herodian once wrote, that “Alone of the emperors, he gave proof of his learning not by mere words or knowledge of philosophical doctrines but by his blameless character and temperate way of life“.

“The universe is change; our life is what our thoughts make it.”
– Marcus Aurelius, Meditationes (161-180)