You are here: Home › explorer › Around the World with Steam Power – The HMS Driver 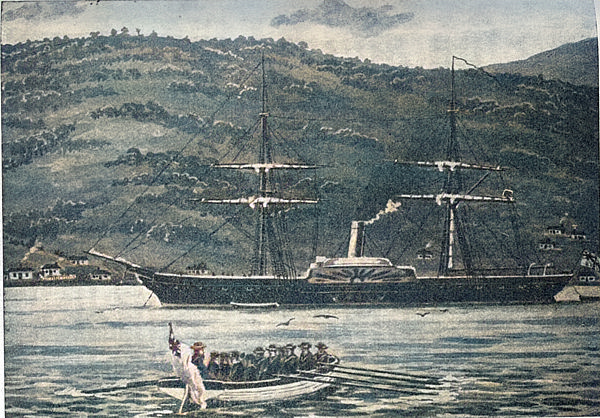 On March 16, 1842, the HMS Driver started the first voyage around the Earth for a steamship, finally arriving back home in Portsmouth, England, again on Friday 14 May 1847.

A Circumnavigation of the Globe

The first single voyage of global circumnavigation was that of the ship Victoria, between 1519 and 1522, known as the Magellan–Elcano expedition. It was a Castilian (Spanish) voyage of discovery, led initially by the Portuguese Ferdinand Magellan between 1519 and 1521, and then by the Spanish Juan Sebastián Elcano from 1521 to 1522.[7,8] In 1577, Elizabeth I sent Francis Drake to start an expedition against the Spanish along the Pacific coast of the Americas.[9] Drake set out from Plymouth, England in November 1577, aboard Pelican, which Drake renamed Golden Hind mid-voyage. In September 1578, he passed through the southern tip of South America, named Drake Passage, which connects the southwestern part of the Atlantic Ocean with the southeastern part of the Pacific Ocean. In June 1579, Drake landed somewhere north of Spain’s northern-most claim in Alta California, which is known as Drakes Bay, California. Drake completed the second circumnavigation of the world in September 1580, becoming the first commander to lead an entire circumnavigation.

HMS Driver was a Driver-class wooden paddle sloop of the Royal Navy of 1.058 tons with machines performing about 280 horsepower. It was equipped with four big guns, two of them weighing 68 pounds and the others about 34. However, there are resources stating that the ship was equipped with two further canons, but this is not quite proven. The crew consisted of about 175 commissioned officers and lower ranked crew members. The ship‘s figurehead caused quite a scandal back then, since it depicted a coachman of the post, carrying a whip and wearing only a large coat.

HMS Driver was designed by the Surveyor of the Navy Sir William Symonds, who gained his first experiences in naval architecture in the 1820s and devoted much time of his life to royal yacht building. In 1840, Driver was ordered from Portsmouth Dockyard. Her hull cost £19,433, with the machinery costing another £13,866.

Australia and the Lack of Coals

In its early years, the HMS Driver was part of suppressing piracy in the waters of Eastindia and was stationed in China for quite a while. On 4 December 1845, the ship arrived as the very first steam ship the city of Fremantle on Australia’s westcoast. When the Australian’s sighted the smoke on the far horizon, they first mistook the Driver for a burning ship. They only realized what happened when the ship came closer and closer to the port. In January of the following year, Driver reached Sydney, where the crew intended to refill fuel and provisions. Unfortunately, the needed amount (500 tons) of coal was not available in Sydney and smaller ships had to organize coal from smaller ports nearby.

New Zealand and the Maori Uprise

Driver left the city on 15 January and supply ships had to bring more coal to Auckland for another refill. Auckland was reached five days later where it was used for military purposes. Again, HMS Driver was the very first steam ship arriving at Auckland. In New Zealand, the HMS Driver was used for military tasks before and during the Māori uprise. On 3 February 1846, the steamer, together with the frigates Castor and Calliope, the government brig HMS Victoria and Bark HMS Slains Castle, transported almost 600 soldiers from Auckland to Wellington. The furore caused by the arrival of such a large corps of British soldiers – the colonial army increased to almost eight hundred men in Wellington as a result – was exacerbated by the spectacle of the steamship. The HMS Driver was the first steamer in the harbour. For many colonists it was a wonderful vehicle. She surprised the Māori, who gathered to marvel at the strange ship of the foreigners, which was sailing with fire inside and fought easily and quickly against wind and tides.

A decisive factor in the pacification of the Wellington district was the capture of the highest Māori chieftain Te Rauparaha. Under a directive from Governor Grey, a group of HMS Driver sailors committed a secret midnight raid on Taupo Pa near Porirua on July 22, 1846, and Te Rauparaha was arrested on charges of treason. He was kept under guard at the HMS Calliope to the delight of the colonial government, but treated more as a guest than as a prisoner of war. After a few months of peace in the district, he was released.

Driver set off east from New Zealand for her return journey to England via Cape Horn on 28 January 1847. She stopped for six days in Argentina to pick up more coal, finally arriving in Portsmouth, England on Friday 14 May 1847, 105 days after starting from New Zealand. Probably also noteworthy to mention about the HMS Driver, a man named Ingwood, who served as a sailor on board the HMS Driver, was the first European to be hanged in Hong Kong for murder. He had thrown another European, his former drinking buddy, from a sampan into the water and watched him drown.

From Sail to Steam: London’s Role in a Shipbuilding Revolution – Elliott Wragg, [9]