You are here: Home › mathematics › Jakob Steiner and Analytical Geometry 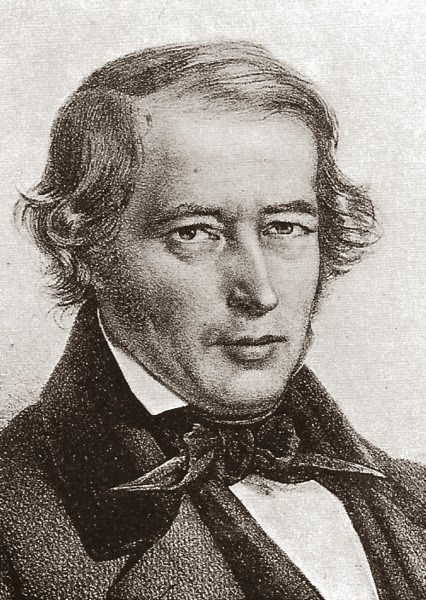 On March 18, 1796, Swiss mathematician Jakob Steiner was born. Steiner‘s work was mainly confined to geometry. Moreover, he has been considered the greatest pure geometer since Apollonius of Perga.

Steiner was the son of a small farmer, attended the local village school, where he learned to write only at the age of fourteen, and at the age of seventeen went to Yverdon to Johann Heinrich Pestalozzi, at whose institution he later worked as an assistant teacher for some time. When this was closed, he moved to Heidelberg in 1818 to study mathematics with Ferdinand Schweins (1780-1856), among others, but due to the poorness of the lectures there he was almost entirely dependent on self-study. He financed his living by private lessons. The lectures on algebra, differential and integral calculus stimulated investigations into mechanics, which he recorded in his compendia in 1821, 1824 and 1825. From the winter of 1820/21 he lived in Berlin, initially as a private teacher of mathematics, and was soon regarded as the best private teacher in the city.

During this time Steiner published some papers on geometrical problems in Crelles Journal für die reine und angewandte Mathematik. Then he was a teacher at the Plamann educational institution, which was influenced by Pestalozzi’s pedagogy. From 1827 Steiner worked at the Gewerbeakademie (Oberlehrer, from 1833 with professor title). Steiner became acquainted with several influential scientists, who supported his career like A. L. Crelle [6] or N. H. Abel.[7] In 1832, he published his Systematische Entwickelungen and earned himself a great reputation. Through the influence of Carl Gustav Jacob Jacobi [8] and of the brothers Alexander and Wilhelm von Humboldt a new chair of geometry was founded for him at the University of Berlin in 1834. He held this position for the rest of his life as a full member of the Prussian Academy of Sciences. He spent the last years of his life in Switzerland, tormented by severe physical ailments.

Steiner devoted most of his mathematical work to geometry and tried to avoid analysis as much as he could, since he hated it. His research became known for its great generality, the fertility of his resources, and for the rigour in his proofs. Jakob Steiner was soon widely considered as the greatest pure geometer since Apollonius of Perga. In his work “Systematische Entwickelung der Abhängigkeit geometrischer Gestalten von einander“, he laid the foundation of modern synthetic geometry and introduced what are now called the geometrical forms. Between their elements, Steiner managed to establish a one-to-one correspondence, or, made them projective, as he referred to it. Furtherly, he gave by aid of these projective rows and pencils a new generation of conics and ruled quadric surfaces, which leads quicker and more directly than former methods into the inner nature of conics and reveals to the organic connection of their innumerable properties and mysteries. Also, for the first time the principle of duality introduced from the very beginning as an immediate outflow of the most fundamental properties of the plane, the line and the point can be seen.

Geometric Constructions and the Poncelet-Steiner Theorem

Another important work by Steiner was “Die geometrischen Constructionen ausgeführt mittels der geraden Linie und eines festen Kreises“, which was published in 1833. The work was influenced by J V. Poncelet [9] and in it, Steiner showed how all problems of the second order can be solved by aid of the straight edge alone without the use of compasses as soon as one circle is given on the drawing-paper. Another famous result is the ‘Poncelet-Steiner theorem’ which shows that only one given circle and a straight edge are required for Euclidean constructions. [10] A posthumously published work was his “Vorlesungen über synthetische Geometrie“. However, next to his scientific books, Steiner authored numerous papers, which were later published in Crelle’s Journal. Especially the one’s concerning algebraic curves and surfaces were the most influential to later mathematicians. Futher very important research, published by the Swiss mathematician was his work on maxima and minima, which surpassed contemporary scientists significantly. Known is his geometric solution of the isoperimetric problem (to show that the circle is the curve that encloses the largest content at a given circumference).

Steiner as a Teacher

In his lectures Steiner attached great importance to the formation of geometric views, which was also an important topic of Pestalozzi pedagogy. In order to promote this view, Steiner refrained from using geometric figures in his lectures. A further characteristic, which came from the school of Pestalozzi, was the responsiveness to the needs of the pupils, who were supposed to discover mathematical knowledge as far as possible by themselves, whereby the teacher only indicates the direction, similar to the Socratic method or the Moore method later influential in the USA. Steiner demanded a lot from his students, there was often a harsh tone and he was not easily satisfied, yet he could gather a circle of loyal students around him.

The last ten years of Steiner’s life were increasingly difficult through illness. Kidney problems caused him to spend most of the year in his native Switzerland, only going to Berlin in the winter to deliver his lectures. Eventually he became totally bedridden and was unable to carry out any teaching duties. Jakob Steiner passed away on  April 1, 1863, at age 67.