You are here: Home › art › Not Simply a Piece of Marble – Michelangelo’s David 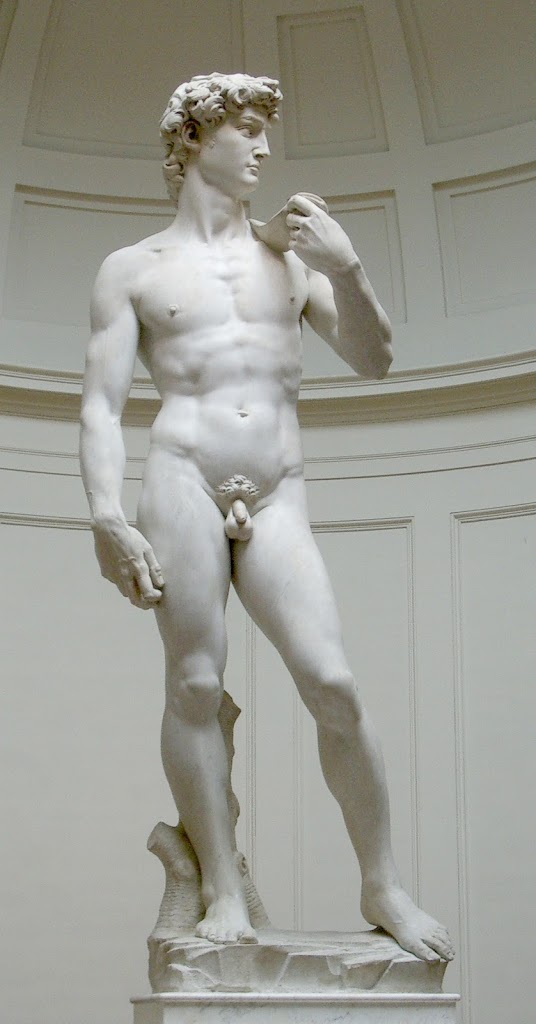 On September 8, 1504 Michelangelo‘s David, a masterpiece of Renaissance sculpture, was unveiled in the city of Florence. The 5 metres high and 6 tons heavy marble statue depicts the Biblical hero David, right before his fight with the enormous Philistine warrior Goliath with the slingshot already on his shoulder, which is special because previous sculptures or art works, like the one’s by Andrea del Castagno or Donatello show David after the famous battle with Goliath’s head in David’s arms.

David’s body appears in a relaxed contrapost position, carelessly carrying the sling over his left shoulder. The battle-ready tension becomes recognizable in the protruding veins of the right hand, that encloses the projectile, above all however in the neck and face-part: in the taut neck-tendons, the tense lips and nose-wings, the wrinkled forehead. David’s gaze is on a point in the distance. Michelangelo, in contrast to the artists before him, no longer draws the observer’s attention to the battle that has come to an end, but to the imminent victory.

Young Michelangelo and a large Block of Marble

The young Michelangelo, who was just 25 when he was assigned to built the sculpture has not been the first choice artist though. Already in 1464, the Italian Agostino di Duccio was supposed to built the David and 12 years later it was up to Antonio Rossellino, but both gave up the work. In 1501, Michelangelo finally began his work on the sculpture that now counts as his greatest piece, finished in 1504. He had at his disposal a huge block of Carrara marble, or more precisely a statuary block, which had been stored in the cathedral garden since 1468 after an elaborate two-year journey. This block was over five meters long, about twelve tons in weight and also had small holes and veins.  Michelangelo was now to complete the plan drawn up almost forty years earlier by the Domopera to add a David to the figure programme of the outer buttresses of Santa Maria del Fiore. The proportions of the figure, which at first sight seemed inadequate, were adapted to the strong underside view of the planned site at great height outside the cathedral choir.

Where to Put it…?

But just before it was finished, a commission including artists such as Sandro Botticelli or  Leonardo da Vincidecided to locate the masterpiece on the plaza in front of the Palazzo Vecchio, the town hall of Florence.[1] After long years the sculpture had to fight against weathering, David was relocated to the Accademia, where the architect Emilio Fabris built a room with a dome just for the statue and it has remained there up to this day.

The artist Michelangelo was born in 1475 and soon after his birth, the family moved to Florence where he was raised. As a not even 10 year old boy, he discovered his passion for art and showed no interest in the schooling of grammar, which his father had enabled for him. At only 13, he apprenticed to the painter Domenico Ghirlandaio, who recommended him to Lorenzo de’ Medici, the leader of the Florentine Republic. Michelangelo was able to attend the Humanist academy, where he studied sculpture and became one of the most talented students of Bertoldo di Giovanni. However, after the death of the Lorenzo de’ Medici, the passionate Michelangelo left Florence due to the political unrest and worked from then on in Venice, later Bologna, and ended up in Rome at the age of 21. Due to the assignment on the sculpture of David, he came back to Florence in 1501.

The David became for a short time the landmark of the free citizens of Florence. In 1512 the Medici, who had been banished from the city in 1494, forced their return to Florence, in the course of which there were serious conflicts. A bench flew out of a window of Palazzo Vecchio and smashed the left arm of the statue. The young Giorgio Vasari collected the fragments and kept them. After the Medici domination was finally secured, he handed it over to Cosimo I in 1543, who had the figure restored.[4] In the 19th century, the surface of the marble sculpture was so badly damaged by the weather and centuries of bird droppings that it had to be given a closed place. After long negotiations – we are talking about thirty years – in 1873 it was given a cupola room specially built for it in the Florentine Accademia, the Tribuna designed by the Italian architect Emilio de Fabris, where it has become a tourist attraction, cleaned of all traces of its history. In 1991, the statue was damaged by a person who could knock some pieces of marble out of the toes of the left foot with a hammer before being overwhelmed by security forces.

The expulsion of the Renaissance – Michelangelo’s David with fig leaf. Stereo photograph by Anton Hautmann, Florence, between 1858 and 1862. Unlike paintings or photographs, stereo photographs could not be retouched unnoticed at that time. So the fig leaf was really there, probably since the end of the Renaissance. Shown is the original statue, which was moved to the building only 20 years later. Then, at the beginning of the 20th century, a copy was placed in this place.

After the famous sculpture of David, Michelangelo completed the painting of the Sistine Chapel’s ceiling in 1512 [3] and a fresco of ‘The Last Judgment’ on the altar wall of the Chapel in 1514. His last major work was the design of the dome of St. Peter’s Basilica, but unfortunately he passed away before it was finished, at the age of 88.