You are here: Home › mathematics › Girard Desargues and Projective Geometry 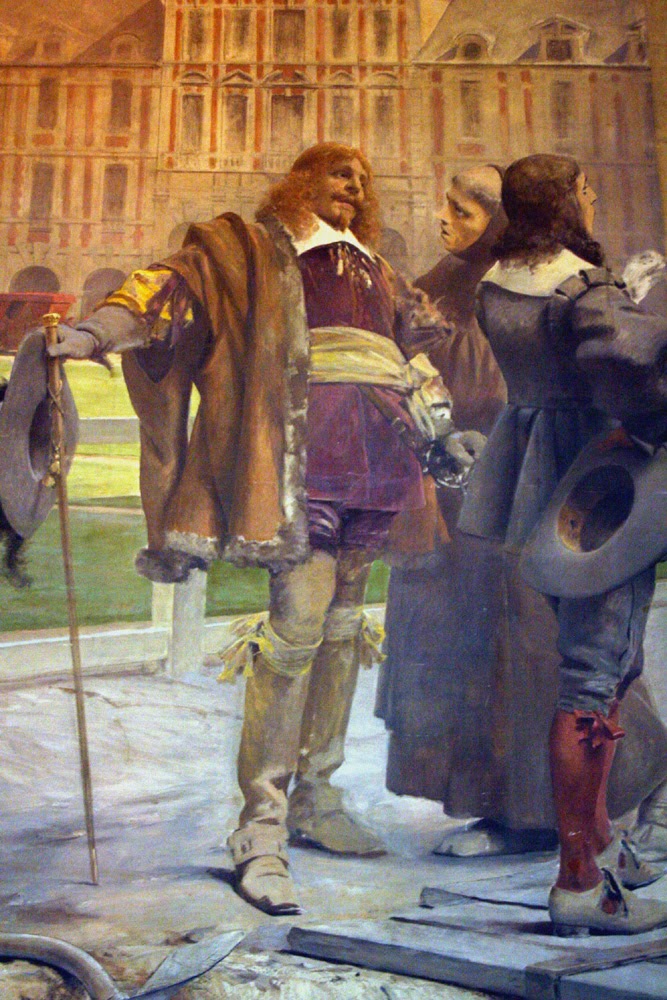 On February 21, 1591, French mathematician and engineer Girard Desargues was born. Desargues is considered one of the founders of projective geometry. Desargues‘ theorem, the Desargues graph, and the crater Desargues on the Moon are named in his honor. In his later years, he designed an elaborate spiral staircase, and an ingenious new form of pump, but the most important of Desargues‘ interests was Geometry. He invented a new, non-Greek way of doing geometry, now called ‘projective’ or ‘modern’ geometry. As a mathematician he was highly original and completely rigorous. However, he was far from lucid in his mathematical style.

“I freely confess that I never had taste for study or research either in physics or geometry except in so far as they could serve as a means of arriving at some sort of knowledge of the proximate causes… for the good and convenience of life, in maintaining health, in the practice of some art,… having observed that a good part of the arts is based on geometry, among others that cutting of stone in architecture, that of sundials, that of perspective in particular.”
– Girard Desargues, (ca. 1640) as quoted in [12]

Little is known about Girard Desargues’ personal life. Born in Lyon, Desargues came from a wealthy family devoted to service to the French crown. His father was a royal notary, an investigating commissioner of the Seneschal’s court in Lyon (1574), the collector of the tithes on ecclesiastical revenues for the city of Lyon (1583) and for the diocese of Lyon, then the second most important city in France. Desargues seems to have made several extended visits to Paris in connection with a lawsuit for the recovery of a huge debt. Despite this loss, the family still owned several large houses in Lyon, a manor house at the nearby village of Vourles, and a small chateau surrounded by the best vineyards in the vicinity. Thus, it is clear that Desargues had every opportunity of acquiring a good education, could afford to buy what books he chose, and had leisure to indulge in whatever pursuits he might enjoy.

In the Entourage of Richelieu

Girard Desargues worked as an architect from 1645. Prior to that, he had worked as a tutor and may have served as an engineer and technical consultant in the entourage of Richelieu. As an architect, Desargues planned several private and public buildings in Paris and Lyon. As an engineer, he designed a system for raising water that he installed near Paris. It was based on the use of the at the time unrecognized principle of the epicycloidal wheel. When in Paris, Desargues became part of the mathematical circle surrounding Marin Mersenne, which also included Rene Descartes,[4] Étienne Pascal and his son Blaise Pascal.[5] It was probably essentially for this limited readership of friends that Desargues prepared his mathematical works, and had them printed.

A Natural Extension of Euclidian Geometry

“Parallel lines have a common end point at an infinite distance.”
– Girard Desargues, Brouillion project (1639) as quoted in [14]

Desargues wrote on ‘practical’ subjects such as perspective (1636), the cutting of stones for use in building (1640) and sundials (1640). His writings are, however, dense in content and theoretical in their approach to the subjects concerned. His research on perspective and geometrical projections can be seen as a culmination of centuries of scientific inquiry across the classical epoch in optics that stretched from al-Hasan Ibn al-Haytham (Alhazen) to Johannes Kepler,[6] and going beyond a mere synthesis of these traditions with Renaissance perspective theories and practices. Desargues conceived projective geometry as a natural extension of Euclidean geometry [7] in which parallel lines at infinity, sizes can vary as long as proportions are kept, and shapes are considered to be one with the totality of shadows they can cast. This is exactly what is needed in perspective design, where each object appears deformed according to the point of observation. Thus the plane sections of a cone are nothing but the different images projected by a light source on a wall when its inclination varies. In this framework, a circle is equivalent to an ellipse, which becomes a parabola as soon as the intersection point of the axis of the light cone with the wall ends up in infinity. 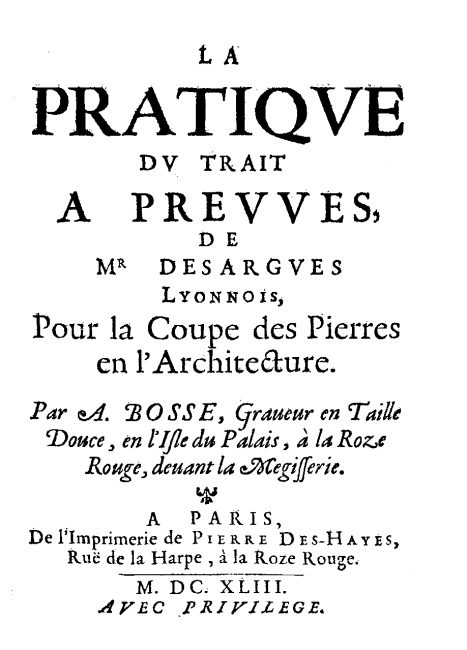 Desargues’ most important work, the one in which he invented his new form of geometry, Rough draft for an essay on the results of taking plane sections of a cone was published in 1639 only in a small number. Just one is now known to survive. The theorem of Desargues of projective geometry states that the intersection points of corresponding sides of two triangles lie on a straight line when the connecting lines of corresponding vertices intersect in one point (and vice versa). The painter Laurent de La Hire and the engraver Abraham Bosse found Desargues’s method attractive. Bosse, who taught perspective constructions based on Desargues’s method at the Royal Academy of Painting and Sculpture in Paris, published a more accessible presentation of this method in 1648. 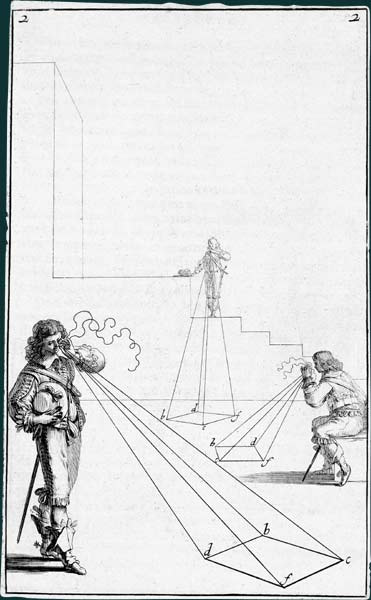 In the 17th century Desargues’s new approach to geometry, i.e. studying figures through their projections, was appreciated by a few gifted mathematicians, such as Blaise Pascal and Gottfried Wilhelm Leibniz,[8] but it did not become rather influential. Rene Descartes’s algebraic way of treating geometrical problems, published in Discours de la méthode (1637) came to dominate geometrical thinking and Desargues’s ideas were forgotten. Desargues’ work, however, was rediscovered and republished in 1864. Late in his life, Desargues published a paper with the cryptic title of DALG. The most common theory about what this stands for is Des Argues, Lyonnais, Géometre (proposed by Henri Brocard). He died in Lyon in 1661.