You are here: Home › mathematics › Lodovico Ferrari and the quartic equations 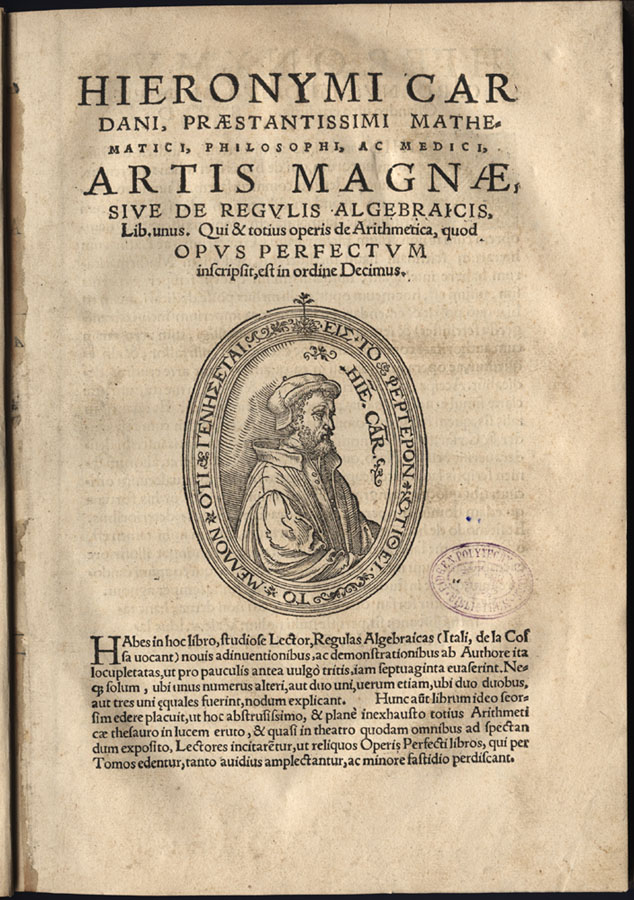 On February 2, 1522, Italian mathematician Lodovico Ferrari was born, who was the first to find an algebraic solution to the biquadratic, or quartic equation.

Born in Bologna, Italy, Lodovico’s grandfather, Bartholomew Ferrari, was forced out of Milan to Bologna. Lodovico settled in Bologna, Italy and by chance, he was able to start his career as servant of one of the most famous mathematicians of the time, Gerolamo Cardano [2]. Initially brought up in his father’s house, Lodovico went to live with his uncle Vincent after his father was killed. This Vincent Ferrari had an own son named Luke, a difficult young man, who decided to run away from home and seek employment in Milan. There discovered that famous mathematician Gerolamo Cardano was looking for a servant. Work did not suit Luke much and after working for Cardano for a while he decided that things were better back home and, without telling Cardano, just left his house. Cardano contacted Vincent Ferrari requesting that he send his son back to continue his employment as a servant in his house. Vincent, however, saw his chance to keep his own son at home and offload the responsibility of supporting his cousin Lodovico, so instead of sending Luke back to Cardano in Milan, he sent Lodovico.[1]

The Secretary of Cardano

At age 14, Lodovico arrived at Cardano’s house in Milan to take over his cousin Luke’s position. Cardano, upon the discovery that the boy could read and write appointed Ludovico as his secretary, who turned out to be an exceptionally gifted young man and he decided to teach him mathematics. By attending Cardano’s lectures, Ferrari learned Latin, Greek, and mathematics. Ferrari aided Cardano on his solutions for quadratic equations and cubic equations, and was mainly responsible for the solution of quartic equations that Cardano published. While still in his teens, Ferrari was able to obtain a prestigious teaching post at the Piatti Foundation in Milan after Cardano resigned from it and recommended him in 1540.[1]

The Solution to the Cubic and Quartic Equation

Ferrari discovered the solution of the quartic equation in 1540 with a quite beautiful argument but it relied on the solution of cubic equations so could not be published before the solution of the cubic had been published. However, there was no way to make this public without the breaking the sacred oath made by Cardano to Niccolò Fontana Tartaglia, a famous fellow mathematician. While Cardano was preparing the publication of his Practica arithmetice (1539), news reached Cardano that a method of solving the cubic equation of the form x3 + ax = b, where a and b are positive, was known to Tartaglia of Brescia. Until then Cardano had accepted Luca Pacioli’s statement in the Summa de arithmetica, geometria, proportioni et proportionalita (1494) that the cubic equation could not be solved algebraically.[5] Cardano had contacted Tartaglia, through an intermediary, requesting that Tartaglia’s method to solve the cubic equation could be included in his book. Tartaglia declined this opportunity, stating his intention to publish his formula in a book of his own that he was going to write at a later date. Cardano, accepting this, then asked to be shown the method, promising to keep it secret. Tartaglia, however, refused.[4]

Would they ever Publish?

Despairing of ever publishing their ground breaking work, Cardano and Ferrari travelled to Bologna to call upon their mathematical colleague, Annibale della Nave, who had been appointed there on the death of Scipione del Ferro. Cardano and Ferrari satisfied della Nave that they could solve the ubiquitous cosa and cube problem, and della Nave showed them in return the papers of the late del Ferro, proving that Tartaglia indeed was not the first to discover the solution of the cubic.[2]

Thus, Cardano and Ferrari decided to include the solution of the quartic equation in Cardano’s Ars magna (1545; “Great Art”). The publication of Ars magna brought Ferrari into a celebrated controversy with Tartaglia over the solution of the cubic equation. After six printed challenges and counterchallenges, Ferrari and Tartaglia met in Milan on Aug. 10, 1548, for a public mathematical contest, of which Ferrari was declared the winner. This success brought him immediate fame, and he was deluged with offers for various positions. He accepted that from Cardinal Ercole Gonzaga, regent of Mantua, to become supervisor of tax assessments, an appointment that soon made him wealthy.[3]

Lodovico Ferrari eventually retired young and quite rich. He then moved back to his home town of Bologna where he lived with his widowed sister Maddalena to take up a professorship of mathematics at the University of Bologna in 1565. Shortly thereafter, he died on 21 September 1576 of white arsenic poisoning, according to a legend – because of his sister.