You are here: Home › mathematics › Gerolamo Cardano and Physician, Mathematician, and Gambler 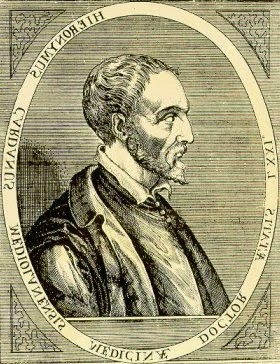 On September 24, 1501, Italian Renaissance mathematician, physician, astrologer and gambler Gerolamo Cardano was born. He wrote more than 200 works on medicine, mathematics, physics, philosophy, religion, and music. But, he is best known for his gambling that led him to formulate elementary rules in probability, making him one of the founders of probability theory.

“The greatest advantage in gambling lies in not playing at all.”
– Gerolamo Cardano (around 1560). Liber de ludo aleae.

Gerolamo Cardano was born in Pavia in 1501 as the probable illegitimate son of the Milan law scholar Fazio Cardano (a universally and mathematically educated friend of Leonardo da Vinci,[4] who gave lectures in Pavia and Milan) and the much younger widow Chiara Micheria. Before they met, she already had three children to look after. When she expected Gerolamo, the plague broke out in Milan and she went to Pavia, but after her return she found out that her three other children had died of the plague. Later she married Fazio Cardano, but they also lived separated for a while. As a child he was often sickly and unhappy. He was an assistant to his father and learned mathematics from him, which made him want to become a scholar. Cardano studied law, natural sciences and medicine in Pavia from 1520 (following his father’s wishes) and in Padua after the University of Pavia was closed due to the war. He was an excellent star, but also created enemies for himself, because he did not mince his words. In 1526 he was awarded a doctorate in medicine in Padua. After the death of his father, he quickly got his small inheritance through and subsequently financed his life mostly through games (cards, chess, dice). However, since this also became an obsession, it later led to his financial distress. He had a very eventful life, in which phases of great poverty and modest wealth alternated.

Marriage and Professor for Medicine

From 1526 to 1532 he worked as a doctor in Saccolongo (near Padua), where he married Lucia Bandarini in 1531. This marriage produced two sons and one daughter. From 1534 he was a doctor at the urban poor and hospital in Milan and received lectureships at the Academy for Lectures in Mathematics, Astrology and Architecture. In 1539, after long disputes, he was admitted to the College of Milanese Doctors and became Rector of this College in 1541. From 1543 he gave lectures on medicine in Milan. In 1544 he accepted a professorship in medicine in Pavia.

His works, printed from 1539 by the Nuremberg publisher Johannes Petreius and partly reprinted in France and Switzerland, made him famous throughout Europe. In 1546 he received offers from Pope Paul III, in 1547 from King Christian III of Denmark and from the Scottish Archbishop John Hamilton (St. Andrews) for highly endowed positions as personal physician. He rejected the offers, but in 1552 travelled via Lyon and Paris to Edinburgh. There he cured Hamilton, who had been treated in vain by the body doctors of King Henry II and then by doctors of Emperor Charles V. The return journey took him via England, the Netherlands, Germany and Switzerland with numerous encounters with scientists, rulers and bishops. He subsequently received offers as a personal physician to the Scottish King, the French King Henry II, the German Emperor Charles V and the Duke of Mantua, and as an engineer to the French Viceroy Brissac, all of whom he rejected. From 1560 to 1562, he resumed his professorship in Pavia after having worked as a writer and as a medical practitioner in the meantime, which he then finally discontinued due to the insolvency of the small university. In 1563 he took over a professorship for medicine at the University of Bologna and was later honoured with the honorary citizenship of Bologna.

Imprisoned by the Inquisition

In 1570 he was imprisoned by the Inquisition without warning and released after three months in prison under conditions. The decisive factor for the arrest was probably an expert opinion on his De rerum varietate. An anonymous inquisitor accused him of heretical statements. In the older literature and among contemporaries, the exact reason for his imprisonment was not known – according to the usual practices of the Inquisition, those arrested did not necessarily know the reason – and gave rise to speculation. Cardano had to remain silent about this as one of the Inquisition’s conditions. Cardano’s writings offered points of attack in various places, even if Cardano himself categorically denied any deviation from the teachings of the Catholic Church. Thus he created a horoscope for Jesus, wrote a benevolent book on the persecutor Nero, and there are passages on astrology that could be interpreted as heretical, since he presents the fate of the individual as determined by the stars, contrary to the doctrine of the Church. In his book De rerum varietate, which, according to the Vatican’s archives, had been the main trigger, the Swiss printer had inserted a derogatory passage about the Dominicans, but Cardano had immediately distanced himself from it and had a correction in a later edition enforced.

Eventually he obtained a partial rehabilitation. He was advised to give up his professorship in Bologna, stop publishing and move to Rome with a papal pension. At the same time, the Vatican ensured his admission to the Roman medical college. Some of his astrological writings, however, were now listed on the index of forbidden books with the addition donec corrigantur (as long as they were not corrected).

Gerolamo Cardano died six years later in Rome on Sept 21, 1576. A legend about Cardano that is frequently heard but not supported by any evidence says that he claimed to be able to predict his own death accurately to the hour. When the predicted hour came, he was embarrassed to find that he was in the best of health. Since he did not want to admit his own mistake, he is said to have caused his own death by starvation. This is a typical example of the hostilities and slander to which Cardano was exposed throughout his life and which even after his death led to such scurrilities.

“Since this art surpasses all human subtelty and the perspecuity of mortal talent and is truly a celestial gift and a very clear test of the capacity of man’s minds, whoever applies himself to it will believe that there is nothing that he cannot understand.”
– Girolamo Cardano, Artis Magnae, sive de Regulis Algebraicis (1545)

Gerolamo Cardano is regarded as one of the last great universal scholars of the Renaissance with an astonishing international fame during his lifetime, which at that time could otherwise be observed among prominent artists and literary figures. The many fields of knowledge that he worked on in the form of lectures and writings range from medicine, mathematics, philosophy, comparative religious studies, physics, chemistry, engineering sciences, pharmacy, psychology and dream interpretation, astronomy and astrology to architecture and the history of science. With this abundance, the enormous volume of his writings cannot be surprising. An essential merit of Cardano lies in the integration of Renaissance humanism with the new orientation of science in the 16th century, with a focus on the natural sciences. This required such a universally educated scholar, who was as proven in philosophy as he was in the natural sciences. In his dealings with others he was considered difficult. As he himself writes in his memoirs, he was often very harsh, sharp-tongued, and also liked to provoke intellectual debate. This earned him not only obvious admiration but also many enemies who envied his fame and did not even shy away from attempting murder. According to his own statements, he had extremely few friends, but there were many patrons, supporters and patrons.

Cardano made important discoveries both in probability theory and combinatorics and in complex numbers. At old age he completed The Book of Games of Chance (Liber de Ludo Aleae) (first published in his Opera Omnia 1663), which contained the foundations of mathematical probability theory, about a hundred years before Pascal and Fermat. He was interested in binomial coefficients and gave, for example, sum formulae for them. He had already found these laws earlier, but had only used them himself at first. With his knowledge, he earned the money from gambling that he needed to support himself in times of unemployment, i.e. when the university in Pavia could not pay his salary. He was probably one of the first to calculate with complex numbers. He came across them while trying to solve cubic equations. Furthermore, he proved that negative numbers can be calculated in a similar way to ordinary numbers. Until then, the usual doctrine among mathematicians was that all numbers must be greater than zero.

In 1545 his book Ars magna sive de Regulis Algebraicis appeared, in which he gave methods for the explicit solution of equations of the third and fourth degree. However, Cardano also created an enemy for himself. Already in 1535 the Venetian mathematician and politician Tartaglia had used the solutions of a special case of cubic equations, which Scipione del Ferro had discovered around 1530, in public competitions, but had kept them to himself, since he used this knowledge to solve corresponding problems against payment. However, he had communicated this solution to Cardano in encrypted form. But Cardano’s solution was more general, it included all cubic equations (and the solutions of 4th degree equations, which he himself attributed to his pupil Lodovico Ferrari)[5]. Nevertheless, Tartaglia accused him of theft and perjury, for Cardano had sworn never to publish this solution. Cardano no longer felt bound by the promise after learning of the earlier solution of del Ferro. Tartaglia was then sentenced by a Milanese court to publicly revoke his accusations.