You are here: Home › art › Liberty enlightening the World 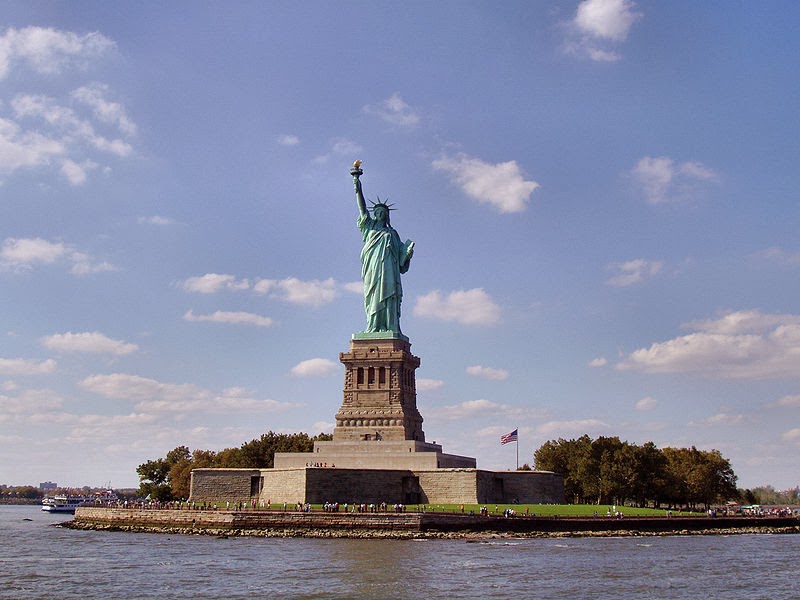 The Statue of Liberty

On October 28, 1886, U.S. president Grover Cleveland, the former New York governor, presided the dedication ceremony of the Statue of Liberty, a gift to the United States from the people of France.

It is not really clear, what the origins of the Statue of Liberty really were. Sculptor Frédéric Bartholdi once stated that he got inspired while staying at a dinner party with Édouard René de Laboulaye, who was back then a famous author, politician, professor and anti-slavery activist. He is supposed to have said that “if a monument should rise in the United States, as a memorial to their independence, I should think it only natural if it were built by united effort—a common work of both our nations.” Bartholdi immediately started drawing sketches but did not show them to Laboulaye right away. With the ending of the Franco-Prussian War however, Laboulaye and Bartholdi decided to gather some ideas and travel to the U.S. in order to discuss it with the government.

The next step was the design of the statue. The two Frenchmen tried to inspire themselves from earlier symbols of liberty in France and the United States. Both preferred a fully dressed female, since a previous half-clothed Liberty figure stood as a symbol during the french Revolution. It was clear that the statue was supposed to look peaceful and the torch would represent progress. The crown with its seven rays would stand for “sun, the seven seas, and the seven continents”. The sculptor planned simple and bold contours, rather classical. In the statue’s left hand, Bartholdi decided to place a keystone-shaped tablet to emphasize the the role of law. It was inscribed with “JULY IV MDCCLXXVI” he date of the Declaration of Independence in the U.S. 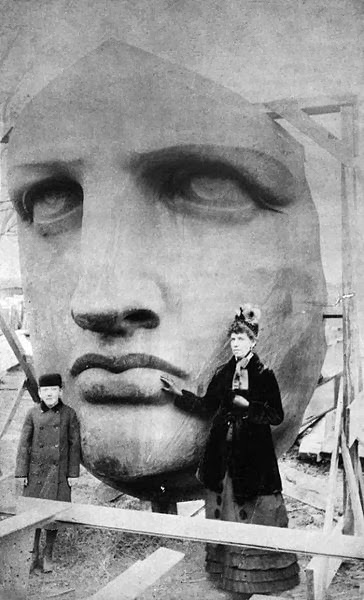 The statue’s head was delivered in 1885

In 1875, the project was officially announced with the title “Liberty Enlightening the World” and in France the project was met with a great support that also became financial. Even schools and ‘regular’ people started fundraisers instead of just the expected elites. In May 1876, construction work started and Bartholdi began with the arm carrying the torch as well as the head. As soon as the arm was finished, it was transported to the Centennial Exhibition in the United States where it was a popular exhibition object. The arm stayed in the U.S for several years until it came back to France where it joined the rest of the statue. The statue’s head was exhibited at the 1878 Paris World’s Fair and in 1880, Gustav Eiffel joined the project. With the help of the famous engineer, the statue became one of the earliest curtain wall constructions that is mostly supported by the interior framework. In 1885, the statue was finally ready to be disassembled and made ready to travel across the ocean.

In the U.S. the building of the statue faced some criticism at first. It was not designed by an American and it did not show a realistic heroic symbol from the American history, but later on the people of America turned out to be quite supportive. Once the American fundraisers were finally successful and the pedestal was built, the statue began to rise. On the afternoon of October 28, 1886, President Grover Cleveland presided the dedication ceremony of the Statue of Liberty. Ironically, during the ceremony, only two women were allowed since organizers feared, women may be injured in the masses of people.

At yovisto academic video search, Professor Joanne Freeman talks about the event that has inspired Bartholdi’s design so much, the Declaration of Independence. She sets the document itself in a historical context and explains it importance to the American Revolution.