You are here: Home › physics › Leo Szilard and the Atomic Bomb 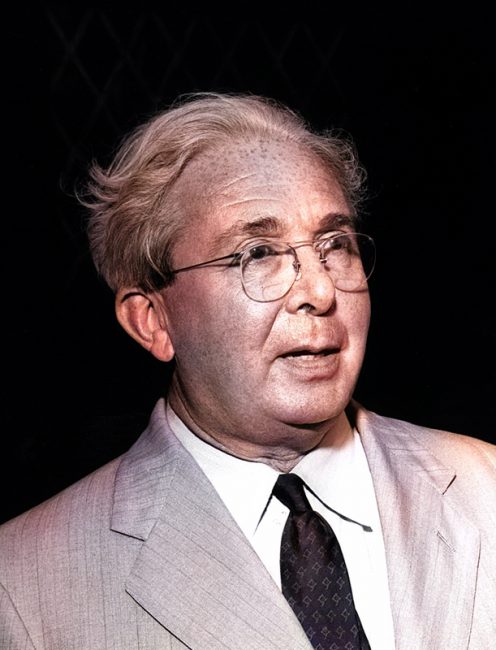 On February 11, 1898, Hungarian-American physicist and inventor Leo Szilard was born. He conceived the nuclear chain reaction in 1933, patented the idea of a nuclear reactor with Enrico Fermi, and in late 1939 together with Albert Einstein wrote the letter that resulted in the Manhattan Project that built the atomic bomb. He also conceived the electron microscope, the linear accelerator, and also the cyclotron.

“A scientist’s aim in a discussion with his colleagues is not to persuade, but to clarify”
– Leo Szilard, [15]

Szilárd was born in Budapest, Hungary, as son of Louis Spitz, a Jewish civil engineer, and Thekla Vidor [1]. Already while attending high school, Leo showed an early interest in physics and a proficiency in mathematics. In 1916, he enrolled as an engineering student at Budapest Technical University. The following year he was drafted, but before his regiment was sent to the front lines, Szilárd fell ill with Spanish Influenza and he was returned home for hospitalization. In 1919 he resumed engineering studies at Budapest Technical University but soon decided to leave Hungary due to the chaotic political situation and continued engineering studies at Technische Hochschule (Institute of Technology) in Berlin-Charlottenburg. He soon changed to physics there and took physics classes from Albert Einstein[12] Max Planck, and Max von Laue. With his dissertation on thermodynamics Über die thermodynamischen Schwankungserscheinungen (On The Manifestation of Thermodynamic Fluctuations), praised by Einstein, he was awarded a doctorate in physics from Humboldt University of Berlin in 1922 [4].

He was appointed as assistant to Max von Laue at the University of Berlin’s Institute for Theoretical Physics in 1924 , where he finished his habilitation in 1927 to become a Privatdozent (private lecturer) in physics. Throughout his time in Berlin he worked on numerous technical inventions. In 1928 he submitted a patent application for the linear accelerator and, in 1929, he applied for a patent for the cyclotron. Szilárd’s 1929 paper, “Über die Entropieverminderung in einem thermodynamischen System bei Eingriffen intelligenter Wesen” (On the reduction of entropy in a thermodynamic system by the intervention of intelligent beings), introduced the thought experiment now called Szilárd’s engine and became important in the history of attempts to understand Maxwell’s demon. This work also is the first equation of negative entropy and information.

“The most important step in getting a job done is the recognition of the problem. Once I recognize a problem I usually can think of someone who can work it out better than I could.”
– Leo Szilard, [15]

Szilard went to London in 1933 where he read an article where Ernest Rutherford rejected the feasibility of using atomic energy for practical purposes.[14] Rutherford remarked specifically on the recent 1932 work of his students, John Cockcroft and Ernest Walton, in “splitting” lithium into alpha particles, by bombardment with protons from a particle accelerator they had constructed. Although the atom had been split and energy released, nuclear fission had not yet been discovered. Szilard was reportedly so annoyed at Rutherford’s dismissal that he conceived of the idea of nuclear chain reaction (analogous to a chemical chain reaction), using recently discovered neutrons. The idea did not use the mechanism of nuclear fission, which was not then known, but Leo Szilárd realized that if neutrons could initiate any sort of energy-producing nuclear reaction, such as the one that had occurred in lithium, and could be produced themselves by the same reaction, energy might be obtained with little input, since the reaction would be self-sustaining. The following year he filed for a patent on the concept of the neutron-induced nuclear chain reaction.

In 1938 Szilard accepted an offer to conduct research at Columbia University in Manhattan, and moved to New York. After learning about the successful nuclear fission experiment conducted in 1939 in Germany by Otto Hahn, Fritz Strassmann and Lise Meitner [11], Leo Szilard and Enrico Fermi [10] concluded that uranium would be the element capable of sustaining a chain reaction. Szilárd and Fermi conducted a simple experiment at Columbia and discovered significant neutron multiplication in uranium, proving that the chain reaction was possible and enabling nuclear weapons. At around that time the Germans and others were in a race to produce a nuclear chain reaction. German attempts to control the chain reaction sought to do so using graphite, but these attempts proved unsuccessful. Szilard realized graphite was indeed perfect for controlling chain reactions, and fostered by his attempts, the first human-controlled chain reaction occurred on December 2, 1942.

Szilárd was directly responsible for the creation of the Manhattan Project. In August 1939, together with his old friend Albert Einstein he drafted a confidential letter to Franklin D. Roosevelt explaining the possibility of nuclear weapons, warning of Nazi work on such weapons and encouraging the development of a program which could result in their creation [5]. The Einstein–Szilárd letter resulted in the creation of the Manhattan Project. Leo Szilárd relocated to the University of Chicago to continue work on the project. As the war continued, Szilárd became increasingly dismayed that scientists were losing control of their research to the military. His resentment towards the U.S. government was exacerbated by his failure to prevent the destructive use of the atomic bomb through having a test explosion that could be witnessed by Japanese observers who would then have the opportunity to surrender and spare lives. However, the new U.S. President Harry Truman agreed with advisers and chose to use atomic bombs against Hiroshima and Nagasaki over the protestations of Szilárd and other scientists.

In 1947, Leo Szilárd switched his field of study from physics to molecular biology. There, he gave essential advice to Theodore Puck and Philip I. Marcus for their first cloning of a human cell in 1955. In February 1950 Leo Szilárd publicly warned of the possibility of a so-called cobalt bomb, a new kind of nuclear weapon using cobalt as a tamper, designed to produce enhanced amounts of radioactive fallout to contaminate a large area with radioactive material. Szilárd suggested that an arsenal of cobalt bombs would be capable of destroying all human life on Earth [6]. In 1961 Szilárd published a book of short stories, The Voice of the Dolphins, in which he dealt with the moral and ethical issues raised by the Cold War and his own role in the development of atomic weapons. In 1960, Szilárd was diagnosed with bladder cancer. He spent his last years as a fellow of the Salk Institute in San Diego until his death in May 1964.

Leo Szilard: The Man Behind the Bomb with William Lanouette, [13]