You are here: Home › history › The Knights Templar and their Most Inglorious End 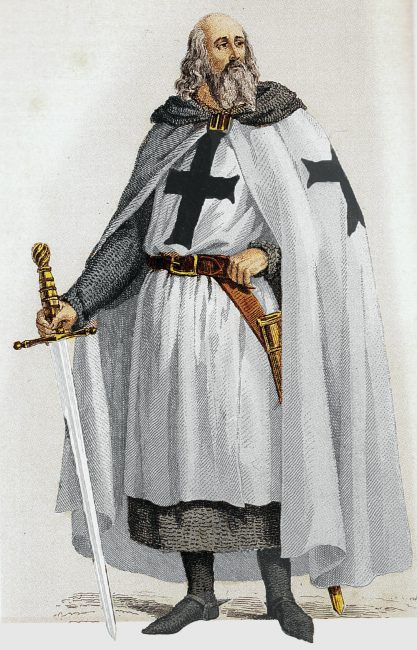 On Friday, October 13, 1307, King Philip IV of France ordered the Knights Templar grandmaster Jacques de Molay and scores of other French Templars to be simultaneously arrested under the accusation of various heredities. It is said that this very date sometimes spuriously is linked with the origin of the Friday the 13th superstition, because it was the beginning of the end of the powerful Knights Templar.

The Origins of the Knights Templar

The Poor Fellow-Soldiers of Christ and of the Temple of Solomon (in Latin: Pauperes commilitones Christi Templique Solomonici) as the Knights Templar are called by full name, were among the most famous of the Western Christian military orders during the Middle Ages. Their organisation existed for nearly two centuries while they were able to establish fortifications throughout Europe and the Holy Land as well as a large economic infrastructure.

After the First Crusade recaptured Jerusalem in 1099, many Christian pilgrims travelled to visit their Holy Places. Though the city of Jerusalem now was under relatively secure control, the rest of the country was ruled by bandits, where pilgrims were routinely robbed or even slaughtered. At about 1119, the French knight Hugues de Payens proposed King Baldwin II of Jerusalem the installation of a new monastic order responsible for the protection of the pilgrims. The headquarters of the newly founded order was the wing of the royal palace on the Temple Mount in the captured Al-Aqsa Mosque, which was believed to be on the ruins of the ancient Temple of Solomon. This was, how the ‘Templars’ received their name. First, the order had few financial resources and relied on donations to survive, which was resembled in their emblem of two knights riding on a single horse, emphasizing the order’s poverty. 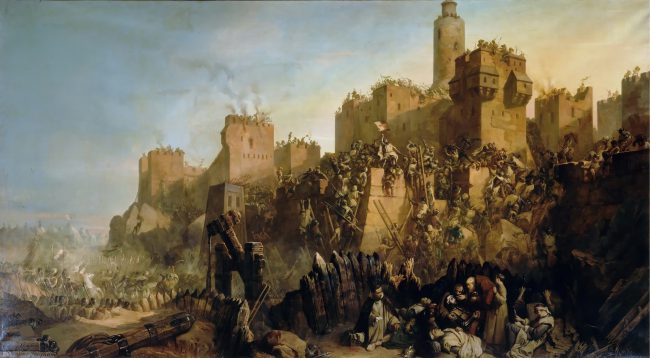 Jacques Molay prend Jérusalem 1299, A depiction of a battle of Jerusalem that never was. The painting was commissioned in 1846 following French rumors that depicted Jacques Molay as having captured Jerusalem in 1299. In reality, after Jerusalem was lost in 1244, it wasn’t under Christian control till 1917, date at which the British Empire took it from the Ottomans. Claude Jacquand (French, 1803-1878)

But over the years, based on a mix of donations and business dealing, the Templars were able to establish financial networks across the whole of Christendom. They acquired large tracts of land, both in Europe as well as the Middle East. They bought and managed farms and vineyards, they built churches and castles, they were involved in manufacturing, import and export, they had their own fleet of ships and at one point they even owned the entire island of Cyprus. The Order of the Knights Templar arguably qualifies as the world’s first multinational corporation. 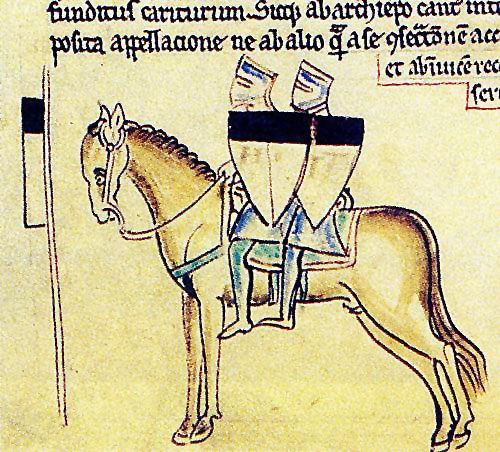 In 1305, Pope Clement V, came up with the idea to merge the two orders of the Templars and the Hospitaller, but both Grand Masters of the orders, the Templar Jacques de Molay and the Hospitaller Fulk de Villaret did not really like the idea. While waiting for Fulk de Villaret to arrive at the Papal court, De Molay and Pope Clement discussed charges that had been made two years prior by an ousted Templar. It was generally agreed that the charges were false, but Clement sent King Philip IV of France a written request for assistance in the investigation. King Philip was already deeply in debt to the Templars from his war with the English and decided to seize upon the rumors for his own purposes. He began pressuring the Church to take action against the order, as a way of freeing himself from his debts.

Thus, on Friday, October 13, 1307 King Philip ordered de Molay and scores of other French Templars to be simultaneously arrested. The arrest warrant started with the phrase: “God is not pleased. We have enemies of the faith in the kingdom“[1]. The Templars were charged with numerous offences, including apostasy, idolatry, heresy, obscene rituals and homosexuality, financial corruption and fraud, and secrecy. Many of the accused confessed to these charges under torture, and these confessions, even though obtained under duress, caused a scandal in Paris. After further bullying from Philip, Pope Clement then issued the papal bull Pastoralis Praeeminentiae on November 22, 1307, which instructed all Christian monarchs in Europe to arrest all Templars and seize their assets [2].

The End and Aftermath

As for the leaders of the Order, the Grand Master Jacques de Molay, who had confessed under torture, retracted his confession. Geoffroi de Charney, Preceptor of Normandy, also retracted his confession and insisted on his innocence. Both men were declared guilty of being relapsed heretics, and they were sentenced to burn alive at the stake in Paris on March 18, 1314. De Molay reportedly remained defiant to the end. According to legend, he called out from the flames that both Pope Clement and King Philip would soon meet him before God.  Pope Clement died only a month later, and King Philip died in a hunting accident before the end of the year.

Although according to official sources almost all Templars had been arrested in France, in fact only a few death sentences were carried out and this only in France. For example, in Avignon, the seat of the Pope at the time, not a single death sentence was carried out. Outside the immediate sphere of influence of King Philip IV, the Templars were only partly persecuted, sometimes even left completely alone. According to tradition, the last Knights Templar in the Rhineland fell in a heroic battle at Lahneck Castle. However, the power of the Templars was broken by the loss of the intellectual and economic leadership elite and the order’s headquarters in Paris. Their activities were only of a local or regional nature. In Cyprus and elsewhere, the dignitaries remained imprisoned until death, and in Spain many Templars were acquitted. It is acknowledged, including by the Pope, that the indictment of the Templars as a whole lacked any basis. Misconduct had only been committed by individuals. Some speak of the “most monstrous judicial murder in history”. 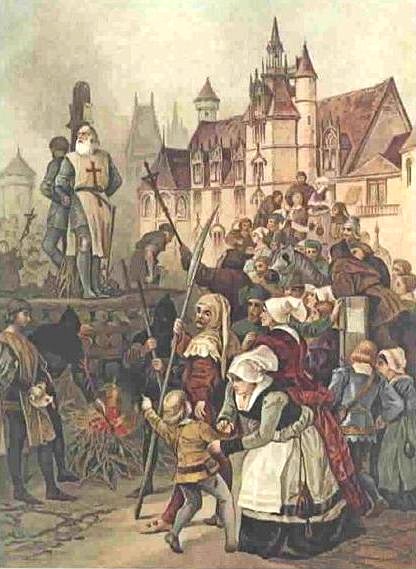 The Source of Myths and Legends

The sudden arrest of the Templars, the conflicting stories about confessions, and the dramatic deaths by burning, generated many stories and legends about both the Order, and its last Grand Master. Moreover, it has drawn many other groups to use alleged connections with them as a way of enhancing their own image and mystery. The Knights Templar were dismantled in the Rolls of the Catholic Church in 1309 with the death of Jacques de Molay; there is no clear historical connection between them and any modern organization, the earliest of which emerged publicly in the 18th century.

The Knights Templar have become associated with legends concerning secrets and mysteries handed down to the select from ancient times. Rumours circulated even during the time of the Templars themselves. Masonic writers added their own speculations in the 18th century, and further fictional embellishments have been added in popular novels such as Sir Walter Scott‘s Ivanhoe, Umberto Eco‘s Foucault’s Pendulum, and Dan Brown‘s The Da Vinci Code,[1,6] modern movies such as National Treasure, The Last Templar, and Indiana Jones and the Last Crusade, as well as video games such as Broken Sword and Assassin’s Creed.