You are here: Home › philosophy › Karl Popper and the Philosophy of Science 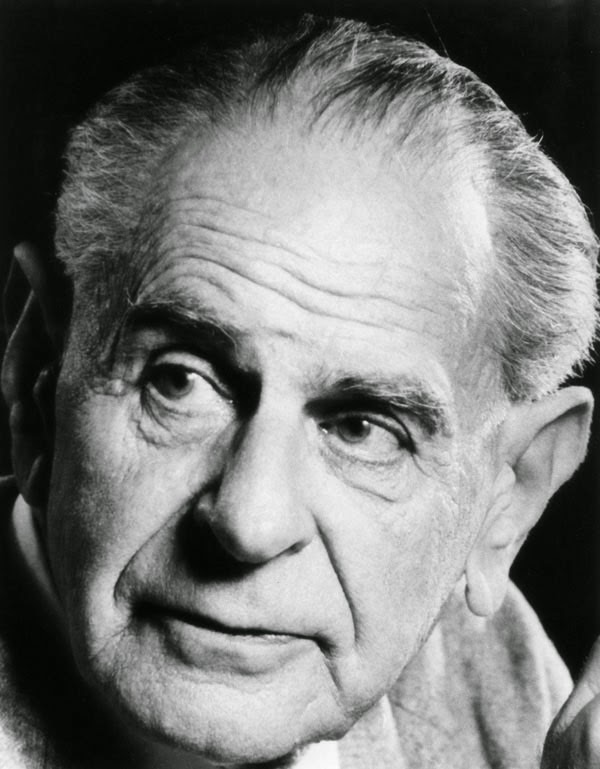 On July 28, 1902, Austrian-British philosopher Sir Karl Raimund Popper was born. He is generally regarded as one of the greatest philosophers of science of the 20th century. Popper is known for his rejection of the classical inductivist views on the scientific method, in favour of empirical falsification: A theory in the empirical sciences can never be proven, but it can be falsified, meaning that it can and should be scrutinized by decisive experiments.

Whenever a theory appears to you as the only possible one, take this as a sign that you have neither understood the theory nor the problem which it was intended to solve. – Karl Popper in Objective Knowledge: An Evolutionary Approach (1972)

Karl Raimund Popper was born in Vienna to Simon Siegmund Carl Popper, a lawyer from Bohemia and Jenny Schiff Popper, who was of Silesian and Hungarian descent. All of Karl Popper’s grandparents were Jewish, but the Popper family converted to Lutheranism before Karl was born. They understood this as part of their cultural assimilation, not as an expression of devout belief. Karl’s father was a bibliophile who had 12,000–14,000 volumes in his personal library. By the time, Vienna claimed to be the cultural epicentre of the western world.

Popper attended the local Realgymnasium, where he was unhappy with the standards of the teaching, and, after an illness which kept him at home for a number of months, he left to attend the University of Vienna in 1918. However, he did not formally enrol at the University by taking the matriculation examination for another four years. In 1919 he became heavily involved in left-wing politics, joined the Association of Socialist School Students, and became for a time a Marxist. However, he was quickly disillusioned with the doctrinaire character of the latter, and soon abandoned it entirely. He also discovered the psychoanalytic theories of Siegmund Freud [6] and Alfred Adler,[4] and listened entranced to a lecture which Albert Einstein [5] gave in Vienna on relativity theory. The dominance of the critical spirit in Einstein, and its total absence in Marx, Freud and Adler, struck Popper as being of fundamental importance: the pioneers of psychoanalysis, he came to think, couched their theories in terms which made them amenable only to confirmation, while Einstein’s theory, crucially, had testable implications which, if false, would have falsified the theory itself [1].

The Philosophy of Science

Popper had a rather melancholic personality and took some time to settle on a career; he obtained a primary school teaching diploma in 1925, took a Ph.D. in philosophy in 1928 and qualified to teach mathematics and physics in secondary school in 1929. The dominant philosophical group in Vienna at the time was the Wiener Kreis, a circle of ‘scientifically-minded’ intellectuals including Rudolf Carnap,[7] Otto Neurath, Viktor Kraft, and Hans Hahn with the principal objective to unify the sciences. For his part, Popper became increasingly critical of the main tenets of logical positivism. He articulated his own view of science, and his criticisms of the positivists in “Logik der Forschung” in 1934 (translated by Popper himself twenty-five years later under the title The Logic of Scientific Discovery), which gained him an enormous reputation and had a tremendous impact on the scientific community.

“In point of fact, no conclusive disproof of a theory can ever be produced; for it is always possible to say that the experimental results are not reliable or that the discrepancies which are asserted to exist between the experimental results and the theory are only apparent and that they will disappear with the advance of our understanding. If you insist on strict proof (or strict disproof) in the empirical sciences, you will never benefit from experience, and never learn from it how wrong you are.” (Karl Popper)

Due to the rise of fascism in Austria as well as in Germany and the steady growth of anti-Semitism, Popper was forced to leave Austria. In 1937, he went to New Zealand and taught philosophy as a senior lecturer at the University of Canterbury. After the Second World War, he went to London, first as reader in logic and scientific method, then in 1949 became a professor of logic and scientific method at the London School of Economics, a post which he held until 1969. Many visits as a guest professor in the United States followed, among them the William James Lectures at Harvard in 1950.[2]

Popper’s relations with many of his most devoted students were now often stormy and, with the exception of one or two cases, tended to end in open hostility. Popper had become intolerant of dissent and also inclined to misunderstand the nature of his own contribution to the philosophy of science. He believed that he had solved the problem of how scientific knowledge is generated and established. In reality he had merely moved the problem one step forward and so opened an entirely new problem. In demonstrating that all scientific knowledge is only provisional and hypothetical, he had invited doubts as to the degree to which it genuinely corresponded to reality. These doubts were pursued by Thomas Kuhn and led him to a relativism which never gained Popper’s approval.[3,8]

He had public debates with Ernst Bloch and Theodor Adorno, two of the most popular luminaries of Continental philosophy in the 1950s and 1960s, and in 1972 he published his third major book, Objective knowledge, in which he established a close link between his philosophy of science and the development of neo-Darwinism. He was knighted in 1965. Popper continued to think and write until the very last years of his life. He died on 17 September 1994 in Croydon, Surrey.