You are here: Home › engineering › Karl Nessler and the Invention of Permanent Waves

Advertisement for Nesslers permanent hair wave, from ‘The Ladies Field‘

Karl Nessler was the son of the shoemaker Bartholomäus Nessler and his wife Rosina (née Laitner) from the Black Forest town of Todtnau below the Feldberg. The idea for the permanent wave allegedly came to him already in his youth. It is reported that as a child he occasionally worked as a shepherd and noticed that sheep’s hair was permanently curly, in contrast to human hair. At first he began an apprenticeship in nearby Fahrnau with the village barber Busam, which he stopped after a few months. He extended his experience by stays in Basel, Milan and Geneva, where he learned Italian and French. In Geneva he found employment with a distinguished hairdresser and continued his training. Adapting to the French-speaking environment, he called himself now and for the rest of his life Charles Nessler, and partly Charles Nestle.

The first known practical thermal method was invented by Marcel Grateau around 1872. Grateau applied a pair of specially manufactured tongs (hair iron) which were heated over a gas or alcohol flame. However, due to the high temperatures, the hair tended to degrade. When women became more independent and self-determined, their hair also tended to become shorter. Also, electricity began to be used for heating and the application of the electric motor at the small business and domestic level. As shorter hair was improved in appearance by waving even more than long hair, it was only a matter of time before an improved form of waving appeared.

German inventor Karl Nessler invented an alternative method in 1905. A few years he had moved to Paris, where he met Katharina Laible, who came from the Ulm area and who agreed to let Nessler try the first perm on her. Nessler wrapped the hair in a spiral around rods connected to a machine with an electric heating device. Sodium hydroxide was applied and the hair was heated to 100 °C or more for an extended period of time. The process used about twelve brass rollers, each weighting almost a kilo, and it took six hours to complete. These hot rollers were kept from touching the scalp by a complex system of countering weights which were suspended from an overhead chandelier and mounted on a stand.

The first two attempts resulted in completely burning Katharina’s hair off and some scalp burns, but the method was improved and his electric permanent wave machine was used in London in 1909 on the long hair of the time. Already in 1901, Nessler moved to London. In 1902 he received his first patent for the production of artificial eyebrows and eyelashes. He continued to use his perming apparatus in his own salon in the exclusive Oxford Street. On October 8, 1906, he invited the “Leading Hairdressers” for a demonstration. But the demonstration turned out to be a failure. The reason for this was probably less a reluctance on the part of the experts to recognize the method as new than their fear of losing permanent customers. 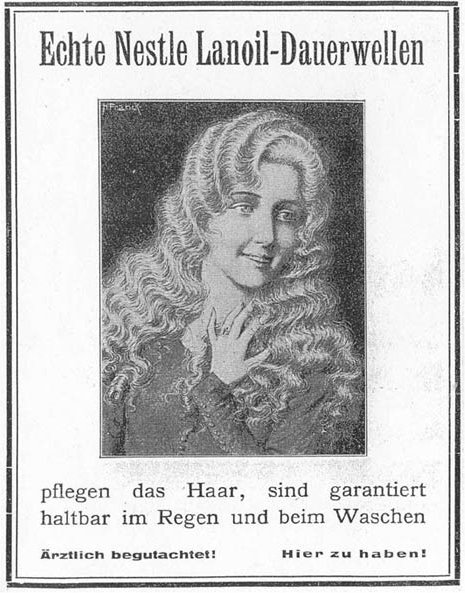 World War I and Emigration to the USA

However, during World War I, the British jailed Nessler because he was German and forced him to surrender his assets. After escaping to New York City in 1915, Nessler realized that numerous of his machines were in use, but most did not work well and were unreliable. Nessler opened a shop on East 49th Street, and soon had salons in Chicago, Detroit, Palm Beach, Florida and Philadelphia. In April 1919, his improved Hair Curler was filed at the United States Patent and Trademark Office. Then, he was already an American citizen. The concept worked, and he soon occupied the front of houses no. 8 to 14 on East 49th Street with his stores. He developed a home appliance that cost only $15. He continued to work on improving the process, from 1919 to 1939 he registered four more patents in the U.S. In 1927 he already had 500 employees in New York, Chicago, Detroit, Palm Beach and Philadelphia, his company empire was worth millions.

In 1928 he sold his hairdressing business, the production facilities and the sales organization to the Nestlé-Le Mur Company, and invested the proceeds mainly in shares. As a result, he lost a large part of his assets on Black Thursday in 1929.[3] His wife Katharina died in 1935. While Nessler was occupied in the following years with methods of skin regeneration (reduction of wrinkles, stimulation of hair growth), his permanent wave technique was gradually replaced by more recent developments. Karl Nessler died on 22 January 1951 in Harrington Park (New Jersey, USA).