You are here: Home › mathematics › Joseph Fourier and the Greenhouse Effect 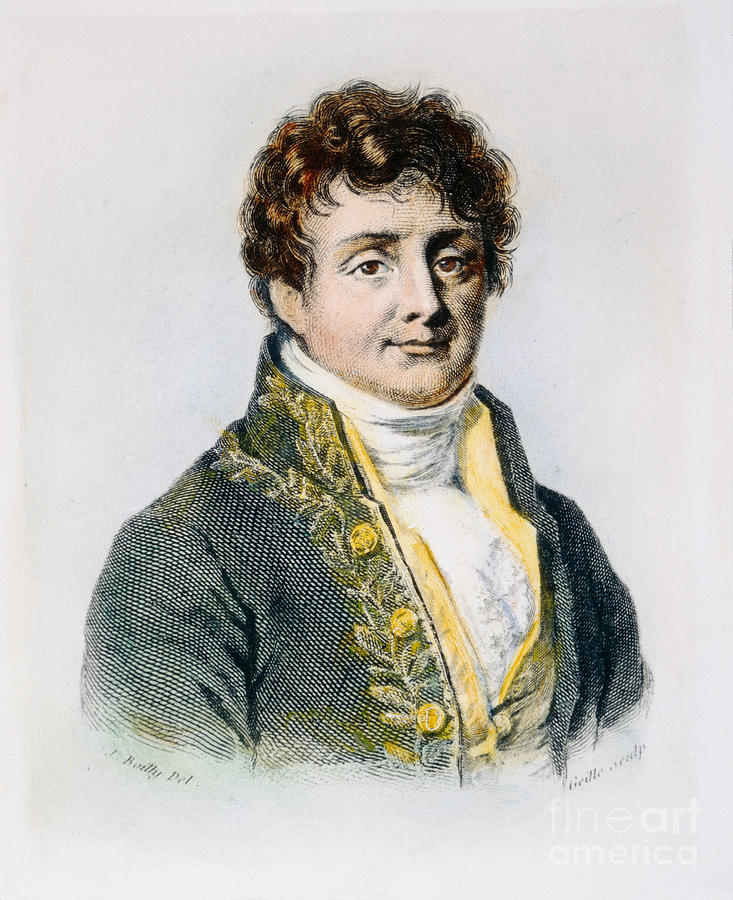 On March 21, 1768, French mathematician and physicist Jean Baptiste Joseph du Fourier was born. He is probably best known for his work in thermodynamics, where he introduced the concept of the Fourier Analysis, named in honor after him. There, he claimed that every mathematical function of a variable can be expanded to a sum of sines of multiples of that variable. What people most likely don’t know is that Fourier also was the first to describe the greenhouse effect, which is responsible also for global warming.

“Profound study of nature is the most fertile source of mathematical discoveries.”
– Joseph Fourier, The Analytical Theory of Heat (1878), ch.1, p.7

Jean Baptiste Joseph Fourier was born on March 21, 1768, in a modest family at Auxerre, France, as the son of a tailor. Orphaned already at age nine, Fourier was recommended to the Bishop of Auxerre, and through this introduction, he was educated by the Benvenistes of the Convent of St. Mark. While he showed an aptitude and flair for literature, this was overshadowed by mathematics, a subject he found himself really interested in at age thirteen. He proceeded to the École Royale Militaire, followed by taking admission in the Benedictine abbey of St Benoit-sur-Loire to prepare for priesthood. However, simultaneously he achieved first merits in mathematics and became rather uncertain, whether to continue his efforts towards priesthood. Military commissions in the scientific corps of the army on the other hand were reserved for those of good birth, and being thus ineligible, he accepted a military lectureship on mathematics at the Benedictine college, École Royale Militaire. Now, he also became involved in politics by taking a prominent part in his own district in promoting the French Revolution, serving on the local Revolutionary Committee. He was imprisoned briefly during the Terror in 1794, but in 1795 was appointed to study at the École Normale Supérieure, a teacher-training school set up for training teachers, and subsequently succeeded Joseph-Louis Lagrange at the École Polytechnique.

Fourier went with Napoleon Bonaparte on his Egyptian expedition in 1798 as scientific advisor, and was made governor of Lower Egypt and secretary of the Institut d’Égypte. Through the help of Fourier, Napoleon set up French type political institutions and administration. Cut off from France by the English fleet, Fourier organized the workshops on which the French army had to rely for their munitions of war. He also contributed several mathematical papers to the Egyptian Institute which Napoleon founded at Cairo, with a view of weakening English influence in the East. After the British victories and the capitulation of the French in 1801, Fourier returned to France with the remains of the expeditionary force and resumed his post as Professor of Analysis at the École Polytechnique. However Napoleon had other ideas about how Fourier might serve him. He wrote

“... the Prefect of the Department of Isère having recently died, I would like to express my confidence in citizen”  – Joseph Fourier by appointing him to this place.

The Mathematical Theory of Heat

Fourier was not happy at the prospect of leaving the academic world in Paris, but could not refuse Napoleon’s request. He went to Grenoble where his duties as Prefect were manifold. His two greatest achievements in this administrative position were overseeing the operation to drain the swamps of Bourgoin and supervising the construction of a new highway from Grenoble to Turin. He also spent much time contributing to the monumental ‘Description de l’Égypte‘ which was not completed until 1810 when Napoleon made changes, rewriting history in places, to it before publication. It was during his time in Grenoble that Fourier did his important mathematical work on the theory of heat. His work on the topic began around 1804 and by 1807 he had completed his important memoir On the Propagation of Heat in Solid Bodies. Besides the derivation of the equations, it contained a solution approach using Fourier series.

The Fourier series is the series development of a periodic, continuous function in sections into a series of functions consisting of sine and cosine functions. Fourier now claimed in his work Théorie analytique de la chaleur that such series developments existed for all functions. This claim was initially rejected by leading mathematicians such as Cauchy [5] and Abel.[6] Based on Newton’s law of cooling, Fourier interpreted that the flow of heat between two adjacent molecules is directly proportional to the extremely small difference of their temperatures. Somehow, Fourier was obsessed with heat, keeping his rooms uncomfortably hot for visitors, while also wearing a heavy coat himself. Some as it is said trace back this eccentricity to his 3 years in Egypt.

In 1814, Fourier was placed in a tricky position, when Napoleon abdicated and set out for Elba with every likelihood of passing southward through Grenoble. To greet his old master would jeopardize his standing with the new king Louis XVIII and thus, Fourier influenced the choice of a changed route and kept his job. Unfortunately, Napoleon reappeared in France again in the very next year, this time marching north through Grenoble where he fired Fourier. However, 3 days later Fourier was appointed Prefect of the Rhone, thus surviving two changes of regime – but of course only for 100 days before the king was back in control and Napoleon was on his way to St. Helena, never to return.

Finally, Fourier moved back to Paris and back to enter scientific life again, being elected to the Académie des Sciences in 1817. In 1823, he became its permanent secretary and in 1826 also for the Académie Francaise. But, Fourier’s health started deteriorating in 1830. While he had already experienced attacks of aneurism of the heart when he was in Egypt and Grenoble, it was in Paris that the problem of suffocation became worse. A fall from the stairs on May 4, 1830, further aggravated the malady and a few days later, on May 16, 1830 Fourier passed away.

One of his lesser known legacies is the discovery of the greenhouse effect. In the 1820s Fourier calculated that an object the size of the Earth, and at its distance from the Sun, should be considerably colder than the planet actually is if warmed by only the effects of incoming solar radiation. He examined various possible sources of the additional observed heat. But, while he ultimately suggested that interstellar radiation might be responsible for a large portion of the additional warmth, his alternative consideration of the possibility that the Earth’s atmosphere might act as an insulator of some kind is widely recognized as the first proposal of what is now known as the greenhouse effect. Fourier referred to an experiment by Saussure that lined a vase with blackened cork. He used several panes of transparent glass in the corks, separated by sections of air. The midday sunlight could penetrate through the glass panes at the top of the vase. The temperature has been raised in the interiors of this unit. Fourier came to the conclusion that gases in the atmosphere would have to form a stable barrier like the glass panes for this.

…and the Rosetta Stone

Also, when Fourier returned from Egypt in 1801 with many artifacts found on the Napoleon expedition, he also had an ink pressed copy of the Rosetta Stone with him, which he happened to introduce to Jean Francois Champollion,[4] who should become the man who deciphered the Egyptian hieroglyphs with the help of the Rosetta stone. But this is already another story…..