You are here: Home › medical science › Ida Henrietta Hyde and the Microelectrode 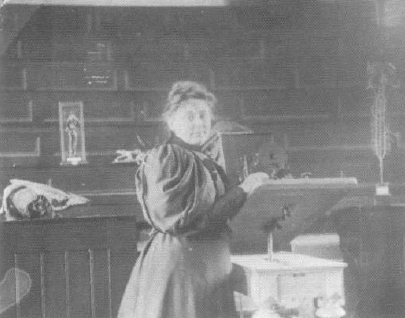 On September 8, 1857, American physiologist Ida Henrietta Hyde was born. Hyde is known for developing a micro-electrode powerful enough to stimulate tissue chemically or electronically, yet small enough to inject or remove tissue from a cell. The microelectrode has been said to have revolutionized neurophysiology.

Ida Henrietta Hyde grew up in Chicago, where she was sent to a public school. In 1871, the family home was destroyed in the Great Fire of Chicago, which destroyed the family business as well. Since Ida was the oldest daughter, she apprenticed at a milliner’s. She brought in a large portion of the family income, and even paid for her only brother’s education at the University of Illinois. Hyde was able to rise to the position of a saleslady.

Hyde began reading Alexander von Humboldt‘s Ansichten der Natur (Views of Nature), which sparked her enthusiasm for biology.[3] She attended night classes and met many women working in the academic field at her brother’s university. Hyde was able to pass the entrance exams for the College Preparatory School and later entered the same university as her brother. When she was 24, Ida Hyde began studying at the University of Illinois but left the university due to financial shortcomings and her brother’s illness. However, after passing the teacher’s exams, Hyde worked as a teacher of second- and third-graders within the Chicago public school system. She was still interested in biology and also wanted to include nature studies in the public school system.

A PhD in Heidelberg

Ida Hyde was able to return to her studies, at Cornell University this time, at the age of 31. She earned the Bachelor of Arts degree and was offered a biology scholarship at Bryn Mawr College. From then on, Hyde worked under Jacques Loeb and Thomas Hunt Morgan.[4] She further assisted at Woods Hole Biological Laboratory and conducted research on the nervous system of jellyfish. In 1893, Hyde received a European Fellowship from the Association of Collegiate Alumnae, which would later become the American Association of University Women. In 1893, Ida Hyde became the first woman to work with Dr. Goette at the University of Strasbourg and received her Ph.D. at Heidelberg University, Germany at age 39. Her thesis project examined the physiological development of jellyfish (Hydromedusa). Hyde worked at several institutions before going to the University of Kansas.

Research on Vertebrates and Invertebrates

Throughout her career, Hyde researched on the nervous, circulatory, and respiratory systems of vertebrates and invertebrates, and explored the effects of narcotics, caffeine, and alcohol on the body. She further noted the differences in the effects of music on the cardiovascular system in athletes, musicians, and farmers and caffeine being the cause of decreased efficiency in physical work. However, one of the aspects, Hyde was best known for, was her work on the microelectrode.

Hyde developed instruments for monitoring physiological parameters in a marine animal that could be used in seawater, her best known invention being the intracellular micropippette electrode. Dr. Hyde had observed that electrolytes in high concentrations affect processes of cell division, leading to her noting of the minute differences in electrical potential within cells. In order to understand how these nerve and muscle cells work, she needed to be able to stimulate the cells properly and be able to record the results of the change in the currents of the individual cells occurring. Ida’s microelectrode can be used for stimulating cells at the micro level while recording electrical activity within the cell without disturbing the cellular wall. This device was a revolutionary invention in neurophysiology and the study of contractile nerve tissue, however, the micro electrode was never officially attributed to Ida as being its first inventor.

In 1898 Ida Hyde got a permanent position at the University of Kansas. Thanks to her excellent qualifications and references and the University’s urgent need for physiologists for the Medical School under construction, she was immediately hired as Assistant Professor of Zoology. The following year, she became Assistant Professor of Physiology and finally, in 1905, Full Professor and Head of the Faculty of Physiology. This position was also a novelty for a woman in the natural sciences and at a co-educational university. She led the further expansion of the Medical School, advocated for technical, structural and sanitary equipment that corresponded to the current state of the art and continued to give lectures. She attended the Rush Medical School in Chicago for three summers and attended lectures in surgery and clinical medicine. Her goal was M.D., but she did not graduate due to formalities. In 1916 the Faculty of Physiology was restructured, merged with another department and led by a committee instead of an individual. At the same time, Ida Hyde was encouraged to resign. Possible reasons for this were her lack of M.D., her membership of the Society for Ethical Culture, but also the collegiate desire for a man in her position.[4] In 1918 she finally took a break, which she justified with war duties, and did not return to the university.

Ida Hyde officially retired in 1920. Two years later, starting from Heidelberg, she travelled through Germany, Switzerland and Austria. Later she settled in California, first in San Diego, then in Berkeley. There she died in 1945 from intracerebral hemorrhage.