You are here: Home › physics › John Wheeler and the Golden Age of General Relativity 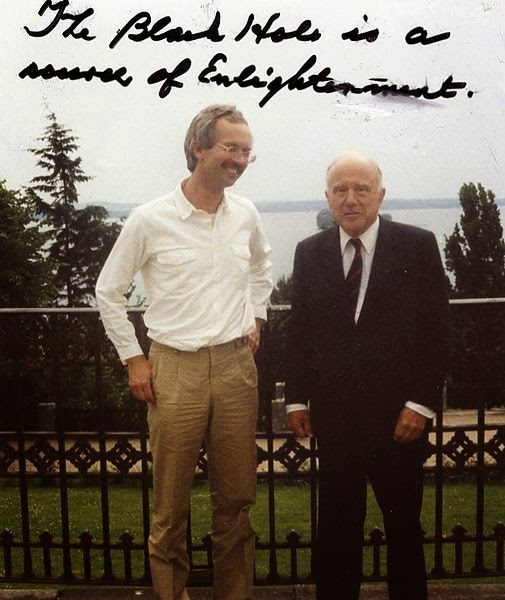 On July 9, 1911, American theoretical physicist John Archibald Wheeler was born. Wheeler worked with Niels Bohr in explaining the basic principles behind nuclear fission as well as with Albert Einstein, with whom he tried to achieve Einstein’s vision of a unified field theory. He is also known for popularizing the term black hole, and for coining the terms quantum foam, and wormhole.

John Archibald Wheeler grew up in a Unitarian home where his early interest in the natural sciences was particularly encouraged. John Wheeler earned his doctorate degree from the John Hopkins University in 1933 and his dissertation was on the theory of the dispersion and absorption of helium. In his early years as a scientist, Wheeler worked at the University of North Carolina until he moved to Princeton University. He became the director of the Center for Theoretical Physics at the University of Texas in 1976 and kept this position until retiring in 1986. However, Wheeler eventually returned to Princeton as a professor emeritus. The scientist supervised more PhD as well as senior undergraduate theses than any other professor in the Princeton physics department.

Collaboration with Niels Bohr and the Manhattan Project

In 1937, Wheeler introduced the S-matrix, which relates the initial state and the final state of a physical system undergoing a scattering process and became an important tool in particle physics. Also, the scientist collaborated with Nils Bohr on the liquid drop model of nuclear fission. He interrupted his academic career to participate in the development of the atomic bomb during the Manhattan Project, working at the Hanford Site in Washington, where several large nuclear reactors were constructed to produce the element plutonium for atomic bombs. In later years, Wheeler also worked on the development of the more powerful hydrogen bomb under the nuclear weapons program.

The Golden Age of General Relativity

John Wheeler returned to Princeton and increased his interest in mathematical extensions to the Theory of General Relativity. He introduced the concept and the word wormhole to describe hypothetical “tunnels” in space-time. Unfortunately, the subject of general relativity was not very much respected, being detached from experiment. However, Wheeler made great efforts in the revival of the research field and his as well as his students’ work made significant contributions to the Golden Age of General Relativity. The so called golden age includes many of the concepts and terms which continue to inspire the imagination of gravitation researchers and the general public. At the same time, in a closely related development, the study of physical cosmology entered the mainstream and the Big Bang became well established. Major research topics included the role of curvature in general relativity, the importance of black holes, and “precision tests” of gravitation theories. Wheeler’s work in general relativity included the theory of gravitational collapse.

A Quantum Theory of Gravitation

As an approach to the quantum theory of gravitation, he introduced with Bryce DeWitt the Wheeler-DeWitt equation as a wave function of the entire universe. In the late 1960s and early 1970s, he played an important role in the then rapidly developing theory of black holes. Wheeler used the term black hole in 1967 during a talk he gave at the NASA Goddard Institute of Space Studies. He said the term was suggested to him during a lecture when a member of the audience was tired of hearing Wheeler say “gravitationally completely collapsed object.” Wheeler also coined the term “wormholes” for dumbbell-like bridges in spacetime. In 1973, he published the comprehensive and pedagogically well thought-out textbook Gravitation with Misner and Thorne. Wheeler was also interested in the interpretation of quantum mechanics and temporarily supported the “Many-worlds Interpretation” of his student Hugh Everett from 1955 before he distanced himself from it.

A Discussion on General Relativity by Students of John Wheeler and Bob Dicke, [10]