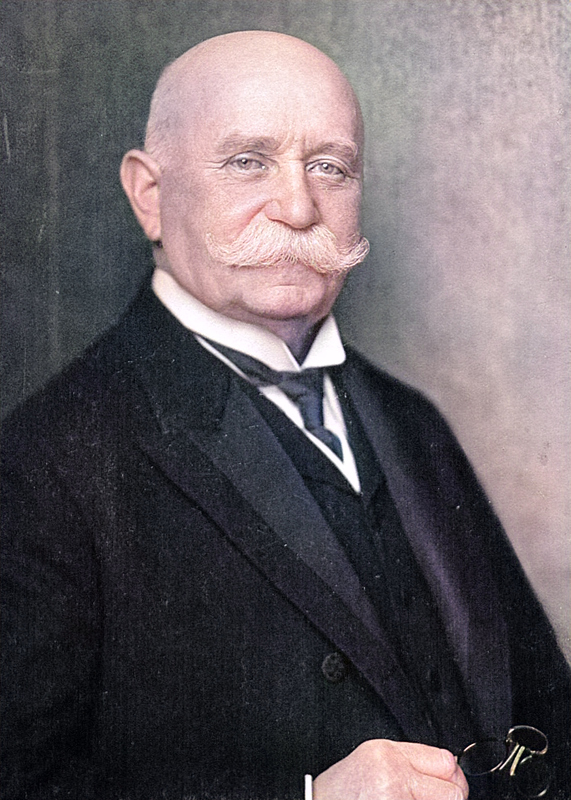 Count Ferdinand von Zeppelin was born on the Dominican Island in Constance in what is now the Inselhotel. He was the son of Count Friedrich Jerôme Wilhelm Karl von Zeppelin (1807-1886), the former court marshal of the Hohenzollern dynasty and cotton manufacturer, and his wife Amélie Françoise Pauline (née Macaire d’Hogguèr) (1816-1852). He attended the military academy at Ludwigsburg near Stuttgart and became an officer in the army of Württemberg. In 1858 he became a lieutenant in the Württemberg Army and in the same year was on leave to study political science, mechanical engineering and chemistry in Tübingen. Due to the precautionary mobilization due to the Austro-Italian conflict, however, he had to discontinue his studies in 1859 and was called up as an engineering corps.

During the American Civil War, Zeppelin traveled to the United States as a military observer and he received a pass signed by President Abraham Lincoln which enabled him to travel with the northern armies.[2] It is assumed however, that he saw his first balloon in St. Paul, Minnesota, far away from the the battlefields of the Civil War. On August 19, 1863, Ferdinand von Zeppelin made his first aerial ascent with balloonist John Steiner and reached 600 to 700 feet in a tethered ascent. He never let go of this experience throughout his life, but he also recognized the weakness of the free balloons: their dependence on the respective wind direction or their uncontrollability.

In the Franco-Prussian War of 1870/71 Zeppelin became famous because of an extensive exploration ride behind enemy lines. Also in this war the use of free balloons, especially on the French side, played a certain role. His diary for April 25, 1874 contains the first entry about the idea of building a steerable airship. In September 1885 he was appointed military commissioner at the Württemberg legation in Berlin and in 1887 was himself appointed Wuerttemberg ambassador. He started developing concepts for a steerable airship and it is assumed that by 1874 he made first entries in his diary describing a rigid-framed, aerodynamically flown ship constructed of rings and longitudinal girders and containing individual gas cells. He sent a message to the King of Württemberg in the mid-1880s explaining the possible use of airships for military purposes. In particular, he explained that unlike balloons, only steerable airships make sense for warfare. Zeppelin began devoting himself completely to the problems of lighter-than-air flight after his retirement from the army and should built his first ‘Luftschiff Zeppelin 1‘ (LZ 1) within 10 years. 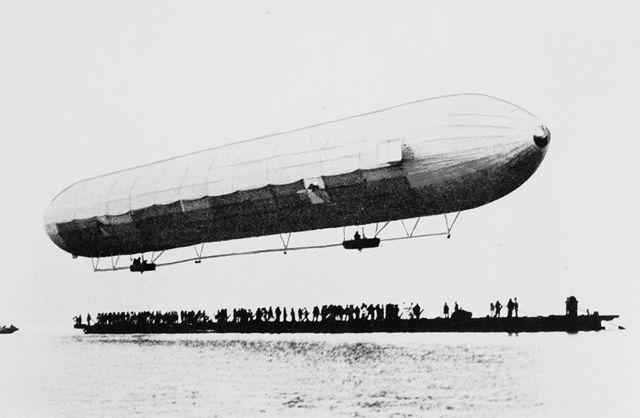 First Zeppelin flight shown above a boat at Lake Constance

A commission of experts appointed by Kaiser Wilhelm, which included professors Hermann von Helmholtz,[3] Richard Aßmann, Adolf Slaby, Heinrich Müller-Breslau and the later designer of semi-rigid military airships, Lieutenant Premier Hans Groß, advised the Ministry of War in two meetings against funding the project. Although Zeppelin fought against the decision and individual members of the Commission, the following years were not very successful for him. From 1895 onwards, the population denounced him as a fool and laughed at him partly in the open street. His attempt to raise on his own initiative the capital of about one million marks required for the construction of an airship failed: The Kaiser subsidized Zeppelin with 6,000 marks. Old friends and members of the Württemberg royal family raised another 100,000 marks. However, most of the required money came from his own funds.

In 1898, Ferdinand von Zeppelin was able to establish the company ‘Gesellschaft zur Förderung der Luftschifffahrt‘. The airships were called zeppelins. Zeppelin’s ideas continued to be largely rejected and mocked by experts and the general public; Kaiser Wilhelm II described the count as the “dumbest of all Southern Germans“. Zeppelin said at that time: “Of course nobody stands up for me because nobody wants to take the plunge into darkness. But my goal is clear and my calculations are correct.” In 1900 there were three ascents of the LZ 1 above Lake Constance. The ever better results led to spontaneous enthusiasm among the population, which contributed decisively to the fact that the count could further develop the technology of the airships and their operation.

A Lack of Confidence

The constructed LZ 1 was designed using a cylindrical framework with 16 wire-braced polygonal transverse frames and 24 longitudinal members covered with smooth surfaced cotton cloth. Propulsion was provided by two 14.2 hp Daimler internal-combustion engines and the airship was steered by forward and aft rudders. During the first trial flight, the LZ 1 carried about five people and reached an altitude of more than 400 m in a distance of almost 6 km. Unfortunately, one of the engines failed and the airship had to do an emergency landing. He was quite frustrated that despite his enthusiasm, military officials still lacked of confidence towards airships for their use and tried to commercialize his ships somehow. After a while, Zeppelin’s airship were more stable and he gained confidence, but Ferdinand von Zeppelin failed to find enough investors. He had to dismantle the airship and liquidate the company.

The Fool of Lake Constance

Despite initial successes, the realization of the second zeppelin was only possible through donations and the proceeds of a kind of money lottery. The financial situation remained difficult. Through a series of accidents with his airships he was popularly referred to as the “fool of Lake Constance.“

However, Ferdinand von Zeppelin still enjoyed the support of the King of Württemberg and a few former business partners and he managed to start the construction of the LZ 2 in 1905. On January 17, 1906, the airship accomplished its only flight. At an altitude of 427m, the airship encountered a stiff breeze and the engines failed. LZ 2 was brought down near Kisslegg in the Allgäu mountains and had to be dismantled afterwards. LZ was a success and the government decided to award Zeppelin 500,000 marks to continue his work.

The Zeppelin Donation of the German People

When the Zeppelin LZ 4 crashed near Echterdingen near Stuttgart on August 5, 1908, a wave of helpfulness was triggered and a turnaround came. The decisive factor was a speech given by a stranger in which he invited the German people to a collection in order to create a new zeppelin. The “Zeppelin donation of the German people“, made as a national donation, raised over six million marks with which Zeppelin was able to found Luftschiffbau Zeppelin GmbH and the Zeppelin Foundation. After the Kaiser‘s brother, Admiral Prince Heinrich flew on board a Zeppelin airship, the LZ 5 was built and accepted into Army service as L II. Until 1914, the German Aviation Association transported 37,250 people on over 1,600 flights without an incident. With the outbreak of World War I, LZ 11, LZ 13 and LZ 17 were then handed over to the German army. From 1914 war airships were built for the First World War. At first, the airships were important components of warfare as bombers and reconnaissance planes. Later on, aircraft increasingly took on the role of zeppelins.

At yovisto academic video search, you may be interested in a video lecture by Randy Friedl on the Opportunities of Airships in Earth Science.