You are here: Home › chemistry › John A. Pople and Computational Methods in Quantum Chemistry 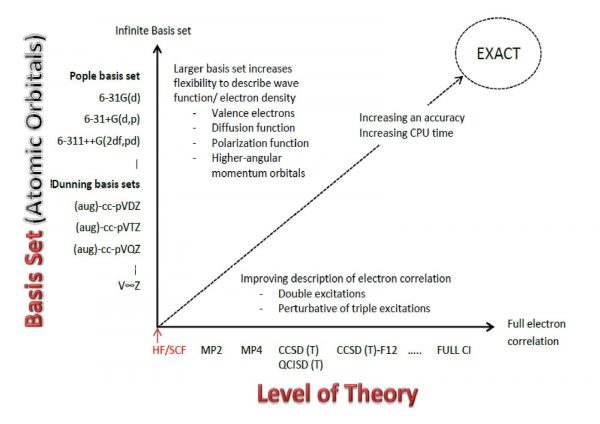 On October 31, 1925, British theoretical chemist and Nobel laureate Sir John Anthony Pople was born. Pople was awarded the Nobel Prize in Chemistry with Walter Kohn in 1998 for his work on computational methodology to study the quantum mechanics of molecules, their properties and how they act together in chemical reactions.

“Sometimes one can improve the theories in the sense of discovering a quicker, more efficient way of doing a given calculation.”
— Sir John Anthony Pople [9]

John A. Pople was born in Burnham-on-Sea, Somerset, UK, to his father Herbert Keith Pople, who, when he returned from service in the army in World War I, owned and managed the principal clothing shop for men in Burnham, and his mother Mary Frances Pople (née Jones). At the age of 12 years, John developed an intense interest in mathematics.[1] After attending the Bristol Grammar School, he won a scholarship to Trinity College, Cambridge, in 1943. Pople completed Part II of the mathematical tripos as the European war was ending in May 1945, and received his Bachelor of Arts degree in 1946. Between 1945 and 1947 he worked at the Bristol Aeroplane Company.

Pople then returned to the University of Cambridge in 1947. During 1947-48 Pople took courses on quantum mechanics, taught by Paul Dirac,[7] fluid dynamics, cosmology and statistical mechanics, taught by Fred Hoyle.[8] He looked for areas of science where he could apply his mathematical skills, and asked Fred Hoyle if he would be his thesis advisor. This did not work out so he next asked John Lennard-Jones who was giving a course on molecular orbital theory. After taking the Part III examinations of the Mathematical Tripos in June 1948, he began undertaking research with Lennard-Jones. He was awarded the Mayhew Prize in 1948.[2] In 1951, Pople completed his doctoral thesis on Lone Pair Electrons and became a fellow of Trinity.

Pople was appointed as a Lecturer in Mathematics at Cambridge in 1954, a position he held until 1958. In 1958, he moved to the National Physical Laboratory, near London as head of the new basics physics division. This did not turn out as well as he had hoped since the heavy administrative burden meant that his time for research was much more limited than he would have wished. He spent a sabbatical year 1961-2 at the Carnegie Institute of Technology in Pittsburgh.[2] Finally, in 1964, he left the National Physical Laboratory to take up an appointment as Professor of Chemical Physics at Carnegie Mellon University in Pittsburgh. It was here that he carried out the work which led to the award of the Nobel Prize for Chemistry in 1998.[2]

Pople pioneered the development of more sophisticated computational methods, called ab initio quantum chemistry methods, that use basis sets of either Slater type orbitals or Gaussian orbitals to model the wave function. While in the early days these calculations were extremely expensive to perform, the advent of high speed microprocessors has made them much more feasible today. He was instrumental in the development of one of the most widely used computational chemistry packages, the Gaussian suite of programs, including co-authorship of the first version, Gaussian 70. One of his most important original contributions is the concept of a model chemistry whereby a method is rigorously evaluated across a range of molecules. His research group developed the quantum chemistry composite methods such as Gaussian-1 (G1) and Gaussian-2 (G2). In 1991, Pople stopped working on Gaussian and several years later he developed (with others) the Q-Chem computational chemistry program.[16] Pople’s departure from Gaussian, along with the subsequent banning of many prominent scientists, including himself, from using the software gave rise to considerable controversy among the quantum chemistry community. The Gaussian molecular orbital methods were described in the 1986 book Ab initio molecular orbital theory by Warren Hehre, Leo Radom, Paul v.R. Schleyer and Pople.

Pople was elected a Fellow of the Royal Society (FRS) in 1961. He was made a Knight Commander (KBE) of the Order of the British Empire in 2003. He was a founding member of the International Academy of Quantum Molecular Science.