You are here: Home › physics › Homi J. Bhabha and the Indian Nuclear Programme 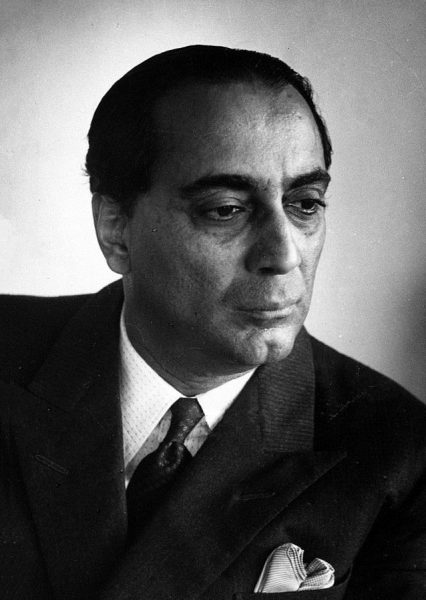 On October 30, 1909, Indian nuclear physicist Homi J. Bhabha was born. Bhabha is often referred to as known as “father of the Indian nuclear programme“. With support from industrialist Dorabji Jamsetji Tata, he established the Tata Institute of Fundamental Research in Bombay (1945) for large scale research in physics, chemistry, electronics and mathematics. He envisioned nuclear power from thorium instead of uranium reserves.

Homi Jehangir Bhabha went to school in Bombay, including Elphinstone College. He attended the Royal Institute of Science before joining the Caius College of Cambridge University. At Cambridge, Bhabha studied under Paul Dirac [4] in order to complete the Mathematics Tripos and meanwhile he worked at the Cavendish Laboratory. During the 1930s he was awarded the Salomons Studentship in Engineering and obtained first class on his Mathematical Tripos.

In 1933, Homi Bhabha earned his doctorate in nuclear physics after publishing his first scientific paper on The Absorption of Cosmic radiation. Bhabha continued to study under Ralph H. Fowler in Cambridge and worked with Niels Bohr in Copenhagen.[5] In 1935 he managed to publish a paper in the Proceedings of the Royal Society, in which he described his calculation to determine the cross section of electron-positron scattering. Electron-positron scattering was later named Bhabha scattering, in honor of his contributions in the field. The Bhabha scattering is a quantum mechanical elementary particle scattering similar to the Møller scattering, in which an electron and a positron interact. This process is used as a monitor reaction in particle accelerators like the LEP: The differential cross section is largest at small angles, so that the luminosity of the accelerator can be monitored with a counter near the beam tube.

He further co-authored the paper The Passage of Fast Electrons and the Theory of Cosmic Showers with Walter Heitler in the Proceedings of the Royal Society. They made numerical estimates of the number of electrons in the cascade process at different altitudes for different electron initiation energies. The calculations supported the experimental observations of cosmic ray showers made by Bruno Rossi and Pierre Victor Auger a few years before.[6] Homi Bhabha concluded that observations of the properties of such particles would lead to the straightforward experimental verification of Albert Einstein‘s theory of relativity. He was awarded the Senior Studentship of the 1851 exhibition, which helped him continue his work at Cambridge until the outbreak of World War II in 1939.

During the year, Bhabha returned to India for a holiday and he decided not to return to England after World War II began. He began working as the Reader in the Physics Department of the Indian Institute of Science, then headed by renowned physicist C. V. Raman. Bhabha established the Cosmic Ray Research Unit at the Institute. In 1941 he was elected Fellow of the Royal Society.

In 1944, Homi Bhabha wrote a proposal to the Sir Dorabji Tata Trust for establishing ‘a vigorous school of research in fundamental physics’ which was accepted. The proposed institute was established in Bombay and was named Tata Institute of Fundamental Research. The institute was inaugurated in 1945 and in 1948 it moved into the old buildings of the Royal Yacht club. Homi J. Bhabha proposed to the government to build a new laboratory entirely devoted to this purpose and 1200 acres of land were acquired at Trombay from the Bombay Government.

The Father of Indian Nuclear Power

At the same time, after Indian independence, he became head of the newly founded Indian Atomic Energy Commission at the behest of Jawaharlal Nehru (who was a friend of Bhabha[4]) in 1948. Bhabha was aware of the use of nuclear energy from an early age and suspected that the lack of publications on nuclear fission (the discovery of which became known during his return to India) during the Second World War would lead to secret research in the industrialised countries. In cooperation with Nehru, he pushed for India’s own participation in nuclear research as early as the mid-1940s and then remained India’s leading personality in this field among his successors. In 1954 the Atomic Energy Establishment Trombay started functioning and the Department of Atomic Energy was also established. Bhabha He represented India in International Atomic Energy Forums, and as President of the United Nations Conference on the Peaceful Uses of Atomic Energy, in Geneva, Switzerland in 1955. In 1958, Homi Bhabha was elected Foreign Honorary Member of the American Academy of Arts and Sciences.

On this day, Homi J. Bhabha is widely recognized as the father of Indian nuclear power. He is further credited with formulating a strategy of focussing on extracting power from the country’s vast thorium reserves rather than its meagre uranium reserves. This thorium focused strategy was in marked contrast to all other countries in the world. The approach proposed by Bhabha to achieve this strategic objective became India’s three stage nuclear power programme.

Homi Jehangir Bhabha died in 1966 in the crash of Air India Flight 101 on Mont Blanc. He was on his way to Vienna for an IAEA meeting via Geneva, where the plane was to stop.