You are here: Home › chemistry › John Dalton and the Origins of the Atomic Theory 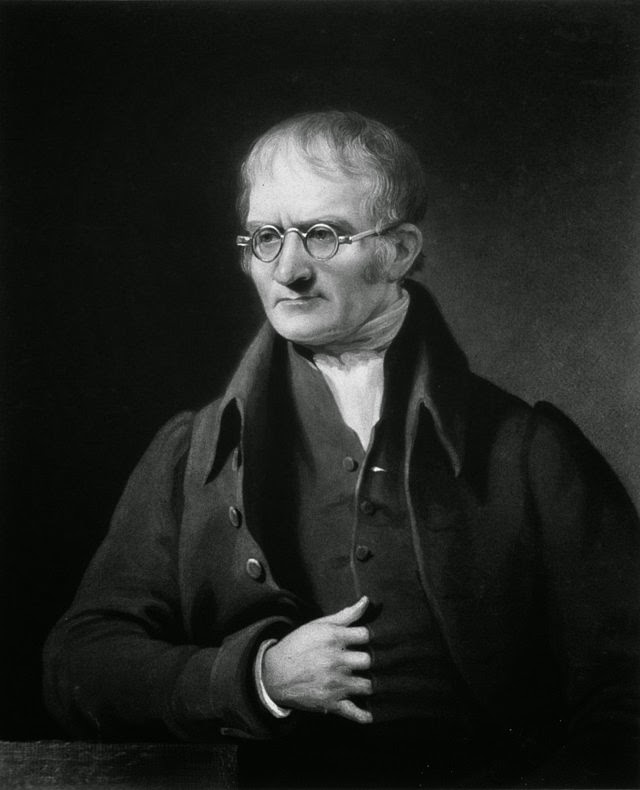 On September 6, 1766, English chemist, meteorologist and physicist John Dalton was born. He is best known for his pioneering work in the development of modern atomic theory, and his research into colour blindness. He also recognised that the aurora borealis was an electrical phenomenon.

“Philosophers are generally persuaded, that the sensations of heat and cold are occasioned by the presence or absence, in degree, of certain principle or quality denominated fire or heat… It is most probable, that all substances whatever contain more or less of this principle. Respecting the nature of the principle, however, there is a diversity of sentiment : some supposing it a substance, others a quality, or property of substance. Boerhaave, followed by most of the moderns, is of the former opinion; Newton, with some others, are of the latter; these conceive heat to consist in an internal vibratory motion of the particles of bodies.”
– John Dalton, Meteorological Observations and Essays, 1834

John Dalton was born into a Quaker family at Eaglesfield, near Cockermouth, Cumberland, England, as son of a handloom weaver. Both he and his brother were born color-blind. After attending a Quaker school in his village in Cumberland, when Dalton was just 12 years old he started teaching there. Around 1790 Dalton seems to have considered taking up law or medicine, but his projects were not met with encouragement from his relatives – Dissenters were barred from attending or teaching at English universities. In 1793, he moved to Manchester and Dalton was appointed teacher of mathematics and natural philosophy at the “New College” in Manchester, a dissenting academy. He remained in that position until 1800, when the college’s worsening financial situation led him to resign his post and begin a new career as a private tutor for mathematics and natural philosophy.

For one of his first research projects, Dalton pursued his avid interest in meteorology. He started keeping daily logs of the weather, paying special attention to details such as wind velocity and barometric pressure—a habit Dalton would continue all of his life.[1] He upheld the view, against contemporary opinion, that the atmosphere was a physical mixture of approximately 80 percent nitrogen and 20 percent oxygen rather than being a specific compound of elements. He measured the capacity of the air to absorb water vapor and defined partial pressure in terms of a physical law whereby every constituent in a mixture of gases exerted the same pressure it would have if it had been the only gas present.[2]

Soon after his arrival at Manchester, Dalton was elected a member of the Manchester Literary and Philosophical Society. His first contribution to this society was a description of the defect he had discovered in his own and his brother’s vision. This paper was the first publication on color blindness, which for some time thereafter was known as Daltonism.[2]

In 1803, he calculated atomic weights of chemical elements and assembled them in a table which consisted of six elements namely hydrogen, oxygen, nitrogen, carbon, sulfur, and phosphorus. In 1803 he set the relative weight for hydrogen to 1, for carbon he came to 4.3, for carbon monoxide to 9.8, for oxygen to 5.5, for nitrogen to 4.2, for water to 6.5, for ethyl alcohol to 15.1. He did not specify how he arrived at these values, but he most likely calculated these weights from percentage compositions of compounds using an arbitrary system to determine the probable atomic structure of each compound.[3] John Dalton’s Atomic theory has three principles that remain relatively unchanged. First, Elements are made of the smallest indivisible particles called atoms. Second, all atoms for a particular element are identical. Third, atoms of different elements can be told apart by their atomic weight. Fourth, atoms of different elements can combine in a chemical reaction to form chemical compounds in fixed ratios. Finally, atoms can not be created, destroyed, or divided as they are the smallest particles of matter.[3] 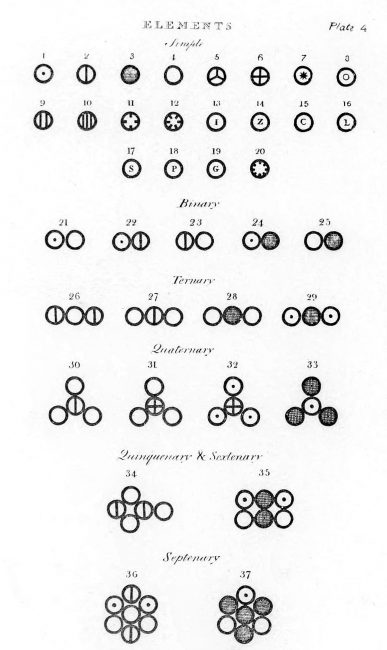 Various atoms and molecules as depicted in John Dalton’s A New System of Chemical Philosophy (1808).

Dalton also hypothesized that the vapor pressures are the same for all liquids at the same temperature distances from the boiling point. He found a constant expansion of the gas volume above the liquid per degree temperature increase – for water and diethyl ether. However, this is not the rule for other liquids. In this context, Dalton (independently of Joseph Louis Gay-Lussac, [4] after whom the law is usually named) found the law of proportional gas expansion of pure gases (oxygen and nitrogen) at an increase in temperature (1801). Here he found the proportionality factor 1/266 ≈ 0.00375, just like Gay-Lussac (the correct value is about 0.365). Due to this relationship, the volume of gases decreases at low temperatures. Dalton coined the term “absolute zero” of a gas, i.e. the temperature at which a gas should be liquid or solid. The following year Dalton investigated the composition of the air and came to quite accurate results regarding the oxygen (21%) and nitrogen (79%) content.

In 1810, Sir Humphry Davy [4] asked Dalton to offer himself as a candidate for the fellowship of the Royal Society, but Dalton declined, possibly for financial reasons. However, in 1822 he was proposed without his knowledge, and on election paid the usual fee. Dalton suffered a minor stroke in 1837, and a second one in 1838 left him with a speech impediment, though he remained able to do experiments. In May 1844 he had yet another stroke; on 26 July he recorded with trembling hand his last meteorological observation. One day later, Dalton fell from his bed and was found lifeless by his attendant.