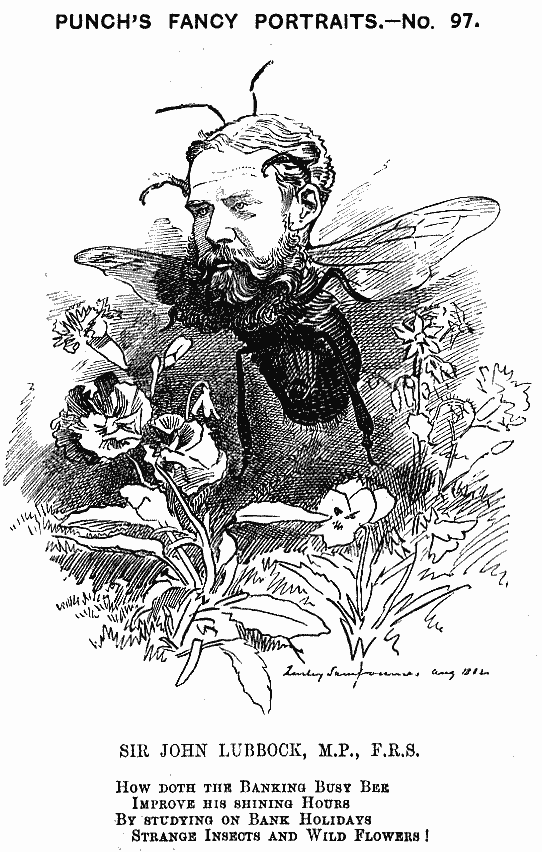 On April 30, 1834, banker, Liberal politician, philanthropist, scientist and polymath John Lubbock, 1st Baron Avebury was born. He was a banker and worked with his family’s company, but also made significant contributions in archaeology, ethnography, and several branches of biology. He helped establish archaeology as a scientific discipline, and was also influential in nineteenth-century debates concerning evolutionary theory. John Lubbock also coined the terms Neolithic and Paleolithic.

“In this world we do not see things as they are. We see them as we are, because what we see depends mainly on what we are looking for.”
– John Lubbock

John Lubbock was born in 1834 and grew up in the family home of High Elms Estate, near Downe in Kent. A story from Lubbock’s childhood is reported in which his father one day came home with a “great piece of news”. Later, Lubbock said that he initially thought his father got him a pony, and was quite disappointed when finding out that it was ‘only’ Charles Darwin moving to Down House in their village. However, the boy became a frequent visitor at Down house and established a close friendship to Darwin, which stimulated Lubbock’s passion for science as well.[2,3]

Lubbock enrolled at Eton College in 1845 and was later employed at his father’s bank where he was announced as a partner at the age of only 22. As his interest in politics evolved, Lubbock was elected Liberal Party Member of Parliament. His goals were the promotion of science and the study of science in primary and secondary schools, national debt as well as free trade, the protection of ancient monuments and the improvements of the working class’ conditions. In 1879, Lubbock was elected the first president of the Institute of Bankers and in 1886 president of the Linnean Society of London.

However, next to working at his father’s bank, Lubbock also had a great interest in archaeology and evolutionary theory. Along with Sir John Evans, he collected Iron Age antiquities at the site of Hallstatt in Austria. The findings are now in the collection of the British Museum. Lubbock also spoke in support of the evolutionist Thomas Henry Huxley at the famous 1860 Oxford evolution debate. During the 1860s, he published many articles in which he used archaeological evidence to support Darwin’s theory. In 1864, he became one of the founding members (along with Thomas Henry Huxley and others) of the elite X Club, a dining club composed of nine gentlemen to promote the theories of natural selection and academic liberalism.

He manage to hold a number of very influential academic positions, including President of the Ethnological Society, and the President of the International Congress of Prehistoric Archaeology in 1868. Lubbock also managed to publish the textbook ‘Pre-Historic Times‘ which became a standard work with seven editions and was illustrated by ancient remains. His major work ‘On the Origin of Civilization‘ was published in 1870. He is known for introducing the terms “Palaeolithic” and “Neolithic” to denote the Old and New Stone Ages respectively. More notably, Lubbock introduced a Darwinian-type theory of human nature and development.

“What was new was Lubbock’s … insistence that, as a result of natural selection, human groups had become different from each other, not only culturally, but also in their biological capacities to utilize culture.”

Lubbock was also an amateur biologist of some distinction, writing books on hymenoptera (Ants, Bees and Wasps: a record of observations on the habits of the social hymenoptera. 1884), on insect sense organs and development, on the intelligence of animals, and on other natural history topics. He discovered that ants were sensitive to light in the near ultraviolet range of the electromagnetic spectrum. The following verse from Punch of 1882 captured him perfectly:

How doth the Banking Busy Bee,
Improve his shining Hours?
By studying on Bank Holidays,
Strange insects and Wild Flowers!

In 1871 Lubbok bought land at Avebury to prevent part of the ancient stone circle from being built on. This, and other threats to the nation’s heritage, persuaded him that some legal protection was needed. In 1874 he introduced a parliamentary bill that would identify a list of ancient sites that deserved legal protection. After several later attempts and against some opposition it was not until 1882 that a much watered down version, The Ancient Monuments Act, came into being. Though restricted to 68 largely prehistoric monuments it was the forerunner of all later laws governing the UK’s archaeological and architectural heritage

“We may sit in our library and yet be in all quarters of the earth”
– John Lubbock, The Pleasures of Life (1887)

In 1900 he was elevated to the peerage as Baron Avebury for his services as a politician and explorer, having been admitted to the Privy Council ten years earlier. The Geological Society of London honoured him with the Prestwich Medal in 1903. In 1858 he became a Fellow of the Royal Society and in 1910 a corresponding member of the Académie des sciences in Paris. John Lubbock died on 28 May 1913, in Broadstairs, Kent, at age 79.