You are here: Home › literature › Dashiell Hammett, the Dean of the Hard-boiled School of Detective Fiction 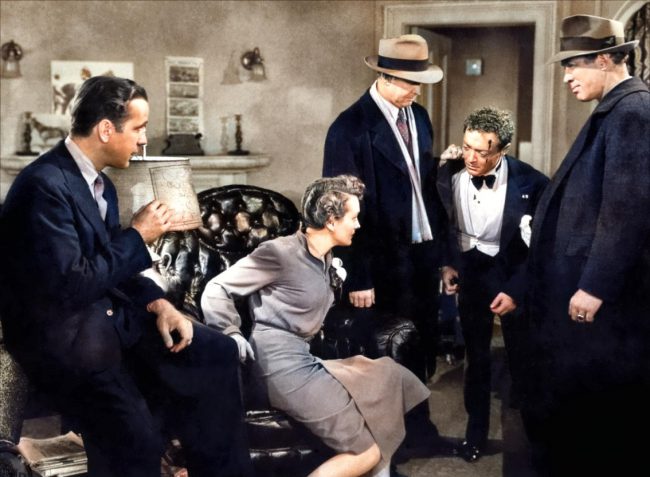 On May 27, 1894, American author Samuel Dashiell Hammett was born. He also published under the pseudonym Peter Collinson. Hammett is considered the founder of the American hardboiled detective novel even before Raymond Chandler.[2] He was also a screenwriter and political activist. Among the enduring characters he created are Sam Spade (The Maltese Falcon), Nick and Nora Charles (The Thin Man), and the Continental Op (Red Harvest and The Dain Curse).

“Samuel Spade’s jaw was long and bony, his chin a jutting v under the more flexible v of his mouth. His nostrils curved back to make another, smaller v. His yellow-grey eyes were horizontal. The v motif was picked up again by thickish brows rising outward from twin creases above a hooked nose, and his pale brown hair grew down-from high flat temples-in a point on his forehead. He looked rather pleasantly like a blonde Satan.”
– Dashiell Hammett, The Maltese Falcon (1931)

Dashiell Hammett was born on a farm in Saint Mary’s County, Maryland. His parents were Richard Thomas Hammett, a vaguely political crook who became a judge, and Annie Bond Dashiell (from the French De Chiel). He left home at the age of 14 in 1908 to lead a bohemian life where he was introduced to the law of the street and kept a strong taste for bourbon. After several small jobs (courier, railway employee, stock exchange clerk, etc.) he became an employee of the Pinkerton National Detective Agency. He claimed that while with the Pinkertons, he was sent to Butte, Montana, during the union strikes, though some researchers doubt this really happened. After participating in the First World War as a member of a motorized hospital unit, he was afflicted during that time with the Spanish flu and later contracted tuberculosis. 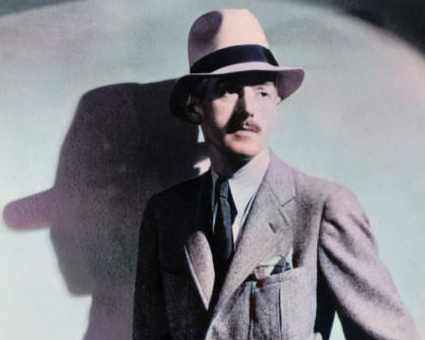 In 1922 he became a writer. Hammett’s first story was published in the magazine The Smart Set. Known for the authenticity and realism of his writing, he drew on his experiences as a Pinkerton operative. He published mainly in the magazine Black Mask of editor Joseph Thompson Shaw. In the early 1920s, Hammett revolutionized the novel with his dry, visual writing and stories in which notions of right and wrong no longer prevail. The archetypes of the characters in the noir novel appeared as early as 1929 in the pulp magazine Black Mask, vamp clinging to her fiancé addict, corrupt industrial magnate and accomplice of the mafia who helped her to break strikes… The break is total with classic, chic and snobby detectives like Miss Marple or Hercules Poirot.[2] He said that “All my characters were based on people I’ve known personally, or known about.“ 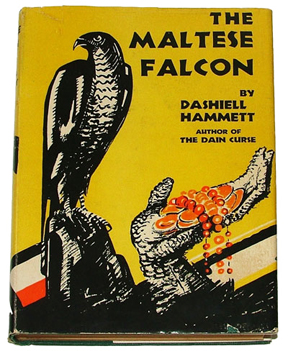 Dashiell Hammett, The Maltese Falcon, Cover of the first edition (1930)

In his crime novels he described the American private detective as an antihero. Hammett’s realistic depiction of the criminal milieu and the combination of criminal and detective set him apart from the classic crime writers who often make a dualistic division of society into “good” and “evil”. In The Maltese Falcon (1930), his detective takes the name of Sam Spade, a hero played on screen by Humphrey Bogart in John Huston‘s The Maltese Falcon (1941). The novel would be adapted three times for the cinema (1931, 1936 and 1941). However, today the 1941 movie adaption is regarded as one of the classics of the crime film and as the best of the three adaptations. Dashiell Hammett reversed the classic role distribution of the crime novel “Rogue” and “Detective” in The Maltese Falcon. In the course of the novel, it becomes increasingly clear that each person primarily seeks his or her own advantage, without observing morals or laws. It is not least this egoism that ultimately leads to the unsuccessful efforts of the characters. In contrast to many other crime thrillers, society here is not divided into the “normal” righteous and the “abnormal” criminals. Everyone appears to be (potentially) corrupt.

In 1920 Dashiell Hammett married Josephine Annas Dolan to whom he later dedicated the novel (“For Jose”) to her. However, Dashiell Hammett’s great love was the playwright Lillian Hellman, with whom he had a relationship since 1931. The relationship lasted until his death. During the Second World War, Hammett volunteered and spent his military service as editor of an army newspaper on the Aleutian Islands. After three years of service, Hammett left the army reserve in 1945 as a staff sergeant. He joined the Communist Party in 1937 and became president of the Civil Rights Congress founded in 1946.

Beside his novels he wrote a number of short stories and was also involved in screenplays. After his last novel The Thin Man (1934) he devoted himself to left political and antifascist activities. He wrote the book after he had not written a novel for about three years due to his alcohol addiction. The story is set in New York City in December 1932, in the last days of Prohibition. The main characters are Nick Charles and Nora, his clever young wife. Nick Charles used to be a detective, but now takes care of his wife’s fortune. Nevertheless, he sets out on a search, always supported by his wife Nora and accompanied by her dog Asta. This constellation results in scenes full of situation comedy, similar to Hollywood’s screwball comedies. The novel also thrives on a multitude of eccentric and bizarre characters, who only gradually find their way to the truth. The novel was filmed in 1934 with William Powell as Nick Charles and Myrna Loy as Nora.

In connection with this political engagement, during the McCarthy era of 1951, Hammett was sentenced to six months in prison for contempt of court, serving five months for exercising his right to refuse testimony under the Fifth Amendment. After Hammett was imprisoned in prison, the U.S. Department of Internal Revenue demanded a back payment of $111,000 from him and confiscated his royalties. According to Hellman’s account, this “ban” was never lifted for the remaining 10 years of his life. Hellman supported him financially. At that time, NBC discontinued Hammett’s Spade series on the radio. The publication of A Man Named Thin was also stopped by the publisher. In 1953 he had to testify before the McCarthy Commission. The interview was broadcast on television.

In 1955 Hammett suffered a severe heart attack and lived a largely withdrawn life ever since. Since 1959 he received a monthly pension of $131 from the Veterans Office. He died of lung cancer as a poor man in 1961 and is buried as a war veteran of both world wars at the Arlington National Cemetery near Washington.