You are here: Home › astronomy › John Dreyer and the New General Catalogue of Nebulae and Clusters

On February 13, 1852, Danish-Irish astronomer John Louis Emil Dreyer was born. Dreyer’s major contribution was the monumental New General Catalogue of Nebulae and Clusters of Stars (based on William Herschels Catalogue of Nebulae)[5], the catalogue numbers of which are still in use today.

Education and Assistant to Lord Rosse

John Louis Emil Dreyer was born in Copenhagen, Denmark, the son of Lieutenant General John Christopher Dreyer, back then the Danish Minister for War and the Navy. From early age, Dreyer became enthusiastic about astronomy and also visited Hans Schjellerup at the Copenhagen observatory. John Dreyer was educated in Copenhagen but moved to Parsonstown, Ireland at the age of 22. From 1874 on he worked on the large reflecting telescope of William Parsons, 3rd Earl of Rosse, in Birr Castle, where he worked intensively with foggy celestial objects.[6]

In 1878, John Dreyer moved to Dunsink, the site of the Trinity College Observatory of Dublin University to work for the Irish astronomer and founder of the screw theory  Robert Stawell Ball. Next, Dreyer began working at the Armagh Observatory, where he was appointed Director until his retirement in 1916. 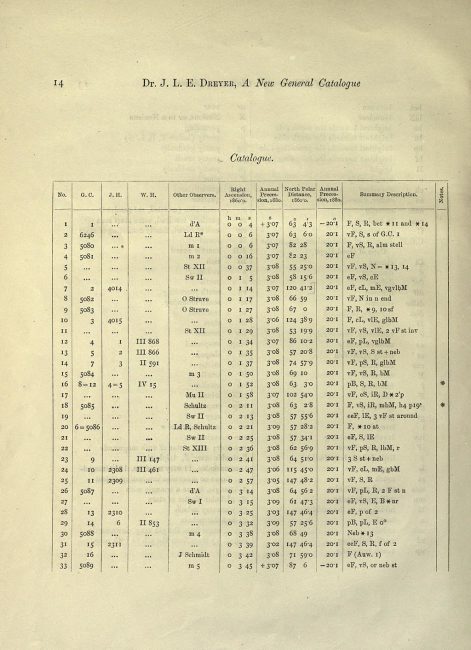 When Dreyer assembled the New General Catalogue of Nebulae and Clusters of Stars, he faced a series of contradicting reports. Dreyer checked some of these himself, but still, the catalogue contained several errors. Fortunately, Dreyer was very careful in his referencing which allowed future astronomers to review the original references and publish corrections to the original NGC. Of the 7840 entries in the NGC catalog, 238 objects have two entries. 16 times an object appears three times. In total, there are 7586 independent entries. Galaxies are most frequently represented in the catalog (79.5%), followed by open star clusters (9%) and emission and reflection nebulae (2%), globular clusters (1.5%), and planetary nebulae (1.2%). A total of 5.2% are single stars or groups of stars, and 0.4% involve parts of other galaxies, these are mostly HII regions. The apparent magnitude of the objects is on average 12.6 mag, the minimum is 16.4 mag 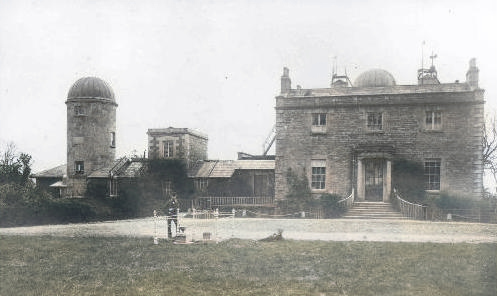 A photo believed to have been taken in 1883 showing the north side of the Armagh Observatory buildings. This is where Johan Dreyer worked.

From the early days of scientific astronomy, he was particularly interested in the work of his compatriot Tycho Brahe. Dreyer and his wife Kate moved to Oxford where he worked on his 15 volume edition of the works of Tycho Brahe,[4] Opera Omnia the last volume of which was published after his death in 1926. Dreyer’s Tycho biography is still the standard biography of this important forerunner of Johannes Kepler. It was supplemented by the comprehensive edition of all Tycho’s works in Latin.[8]  In 1906 he published The History of the Planetary System from Thales to Kepler . In 1912 he wrote the biographical introduction to The scientific papers of Sir William Herschel. For this purpose, all of his manuscripts had to be critically reviewed, as well as his observation notes (which Dreyer partly supplemented with his own post-observations); in addition, there was Herschel’s extensive correspondence and autobiographical notes which his family had made available.

Dreyer was director of Armagh Observatory in Northern Ireland until 1916. In 1901 he was made a Knight of the Order of Dannebrog. In 1916 he received the Gold Medal of the Royal Astronomical Society. In 1923/24 Dreyer was president of the Royal Astronomical Society. He died on 14 September 1926 in Oxford, where he is buried in Wolvercote Cemetery.