You are here: Home › astronomy › William Parsons and his Very Large Telescopes 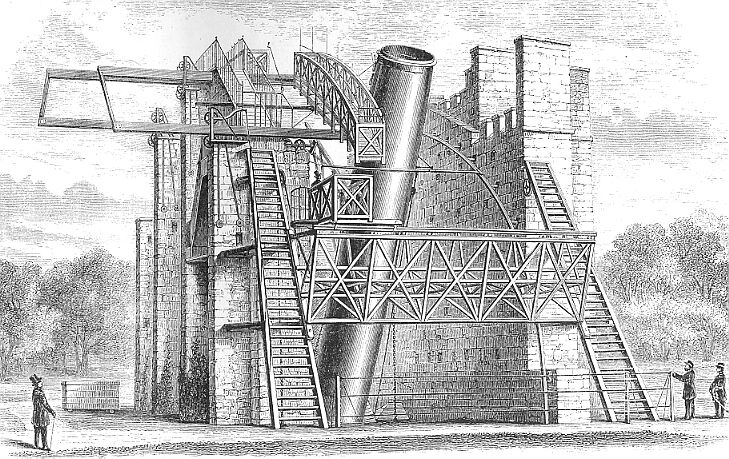 On June 17, 1800, Irish astronomer William Parsons, 3rd Earl of Rosse, was born. As an astronomer, he had several telescopes built, among them his 72-inch telescope, built in 1845 and colloquially known of as the “Leviathan of Parsonstown“, which was the world’s largest telescope, in terms of aperture size, until the early 20th century. In 1848, he found and named the Crab Nebula (because he thought it resembled a crab), by which name it is still known.[5]

William Parson and the Leviathan of Parsontown

William Parsons was born in Yorkshire, England and was educated at Trinity College, Dublin and Oxford University’s Magdalen College. Parsons graduated with first-class honors in mathematics in 1822. In 1821 Parsons was elected to the House of Commons (until 1834). Already in 1824 he was accepted into the Royal Astronomical Society. In the 1840s, William Parsons, 3rd Earl of Rosse, had the Leviathan of Parsonstown built. The reflecting telescope of 1.8m aperture was the largest known telescope until the Hooker telescope was constructed in 1917. Building of the Leviathan began in 1842 and it was first used in 1845; regular use waited another two years, due to the Great Irish Famine. Parsons managed to improve the techniques of casting, grinding, and polishing large telescope mirrors from speculum metal and the details of the production were presented to the Belfast Natural History Society in 1844. Parsons first casted mirror was produced in 1842, but it took five more casts before he had two ground and polished mirrors. The telescope’s mirror was about 13 cm thick and weighed nearly 3 tons. 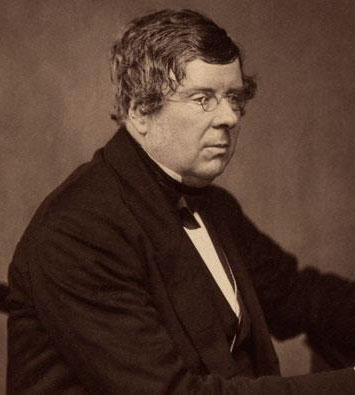 With the help of the telescope named Leviathan, Parsons wanted to observe the nebulae in the catalogues of Charles Messier and John Herschel.[6,7] He discovered that several nebulae had a spiral structure, suggesting ‘dynamical laws’. The most notable spiral nebula observed by Parsons was probably Messier 51, on this day also known as the Whirlpool Galaxy, which he resolved into stars. Rosse also named the Crab Nebula, based on an earlier drawing made with his older 91 cm telescope in which it resembled a crab. A few years later, when the larger telescope was in service, Parsons produced an improved drawing of considerably different appearance, but the original name continued to be used. One of the main goals of Parson’s research on nebula was the attempt to resolve the nebular hypothesis. William Parsons did not believe that nebulas were truly gaseous. Since Lord Rosse – unlike his adversary John Herschel – did not believe in an evolving universe, he sought evidence that the foggy spots from which stars were to develop, according to Herschel, actually consisted of countless small suns. He argued that they were made of such an amount of fine stars that most telescopes could not resolve them individually. With the Leviathan telescope, Parsons and his technicians claimed to have resolved the Orion nebula into its individual stars. However, his primary opponent was John Herschel, who used his own instruments to claim that the Orion nebula was a ‘true’ nebula.

But how to Interpret the Observations

The idea that nebulae are made up of stars was not an invention of Lord Rosse. John Herschel had already speculated that M51 was a brother system of the Milky Way and had – like William Henry Smyth – theorized that they were gigantic systems of countless stars. Lord Rosse had hoped to be able to resolve nebulae like M51 with his giant telescope (which only succeeded at the Andromeda Nebula in 1917). Instead, he recognized a spiral structure in M51, thus fuelling the discussion about the true nature of these systems. The representatives of the Nebula theory considered the spirals to be the result of enormous vortices in gas masses. Only a few astronomers agreed with Rosse – like Stephen Alexander, who wrote in 1851: “The Milky Way and the stars in it form a spiral and several (perhaps 4) arms and a central star cluster“.

The nebulae were not the only field of work in which Lord Rosse was active. He also devoted considerable energy to studying the temperature of the moon’s surface. Lord Rosse’s son published his father’s findings, including the discovery of 226 NGC objects in the publication ‘Observations of Nebulae and Clusters of Stars Made With the Six-foot and Three-foot Reflectors at Birr Castle From the Year 1848 up to the Year 1878‘. In addition to his astronomical interests, Rosse served as a Member of Parliament (MP) for King’s County from 1821 to 1834, president of the British Association in 1843–1844, an Irish representative peer after 1845, president of the Royal Society (1848–1854), and chancellor of Trinity College, Dublin (1862–1867).

The Leviathan of Parsonstown, [12]