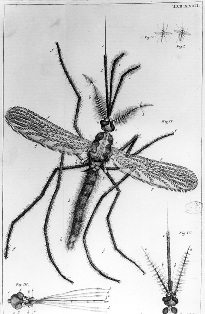 Illustration of a Mosquito from Historia Insectorum Generalis

On February 12, 1637, Dutch biologist and microscopist Jan Swammerdam was born. He was one of the first people to use the microscope in dissections, and his techniques remained useful for hundreds of years. Swammerdam’s work on insects demonstrated that the various phases during the life of an insect — egg, larva, pupa, and adult — are different forms of the same animal. In 1658, he was the first to observe and describe red blood cells.

“Herewith I offer you the Omnipotent Finger of God in the anatomy of a louse: wherein you will find miracles heaped on miracles and will see the wisdom of God clearly manifested in a minute point.”
— Jan Swammerdam, Letter to Melchisedec Thevenot (Apr 1678).

Jan Swammerdam was born in Amsterdam, Netherlands. His father was a pharmacist in Amsterdam and was engaged in collecting coins, minerals and fossils. His mother died in 1661. In the year of her death Jan began to study medicine at the University of Leiden with Franciscus Sylvius. His fellow students included Reinier de Graaf,[6] Frederik Ruysch and Niels Steensen. In 1664 he went to Saumur and Paris, where he made contact with the wealthy universal scholars Tanneguy Le Fèvre and Melchisédech Thévenot. One year later he returned to Leiden and Amsterdam and in 1667 he received his doctorate in medicine with De respiratione, a treatise on respiration.

Research on Respiration, the Lymphatic System, and Blood Cells

Swammerdam proceeded to examine the heart as well as the lungs, and muscles and it is possible that he was the first scientist to describe red blood cells. Further research by Swammerdam included observations on the functionality of nerves as well as the human reproductive system. He is also credited with discovering valves in the lymphatic system and anticipating the role of oxygen in respiration. However, he only practized his profession as a doctor in order to finance his passion, insect research. As a doctor, he frequently performed autopsies, and the findings were incorporated into his anatomical research. He also injected wax into the blood vessels of anatomical specimens in order to illustrate them.

In concerns of his entomological work, Swammerdam was mostly interested in the life history of insects and the anatomy of various animals including butterflies, beetles, bees, and mayflies. He is credited with first describing the queen bee. Previously, scientists mostly referred to the king bee and he managed to develop a classification on insects ‘based on their type of development’. Some of his groups are still used in classification schemes. 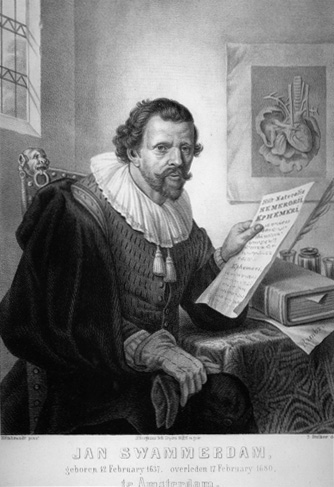 A 19th-century fantasy portrait, based on the face of Hartman Hartmanzoon (1591–1659) from Rembrandt’s The Anatomy Lesson of Dr. Nicolaes Tulp [1]. No genuine portrait of Jan Swammerdam is known.

From 1667 to 1675 he published three treatises on the natural history of insects, which earned him a high reputation but also aroused envy. Swammerdam had several lawsuits against former friends of his studies, so he argued with Graaf about who discovered the ovarian follicles first. At about the same time he fell ill with malaria. The outbreak of the French-Dutch war in 1672 also led to the economic ruin of the Swammerdam family. Swammerdam had long persecuted doubts arising from contradictions in his research on the Bible. In 1675 he travelled to Schleswig to visit the Flemish mystic Antoinette Bourignon and for a time neglected his research in favour of spiritual knowledge. Even an invitation from his friend Niels Steensen [8] to Duke Cosimo III in Florence, who offered him 12,000 guilders to exhibit and complete his insect collection, he rejected. However, he continued his research with the aim of discovering the divine plan of creation in the small creatures. 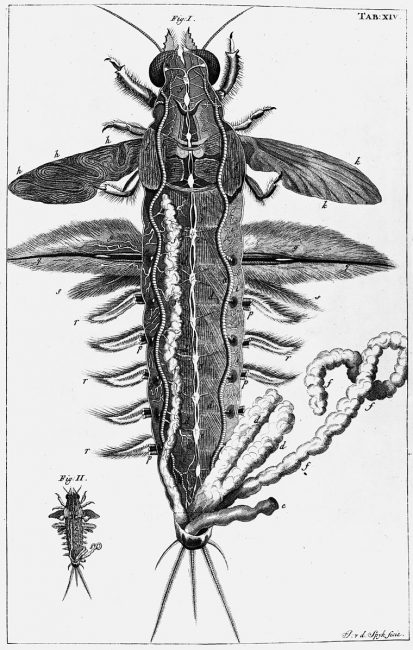 The scientist developed great microscopic skills and techniques which helped him observing his specimens. Just to name an example, Swammerdam injected wax into his specimens in order to preserve blood vessels and keep them firm. He also dissected fragile structures under water to avoid destroying them and used micropipettes to inject and inflate organisms under the microscope. Jan Swammerdam made the lenses he used himself and preferred rather simple microscopes. In order to achieve better results, he mostly observed his specimens under natural light wherefore his research was often delayed. The drawings he created of his specimens where often ‘considered to be the most comprehensive of any single person’.

Swammerdam is also considered the first to describe the phenomenon that muscles do not increase in volume during contraction as Galen’s theory has it. However, he did not believe in appearances, but rather in Descartes‘ hypothesis of a “nerve spirit” that flows from the brain via the nerves into the muscles, and that the muscles gain volume His method of isolating individual frog muscles, developed for this purpose, was still used centuries later. Jan Swammerdam published his famous work Historia Insectorum Generalis in 1669 and his Biblia natura was published posthumously in 1737. Further works include Miraculum naturae sive uteri muliebris fabrica, published in 1672 and Ephemeri vita, in 1674. However, Jan Swammerdam died already at the age of 43, on February 17, 1680.

The Art & History of the Microscope by Dr. Gary Greenberg, [9]